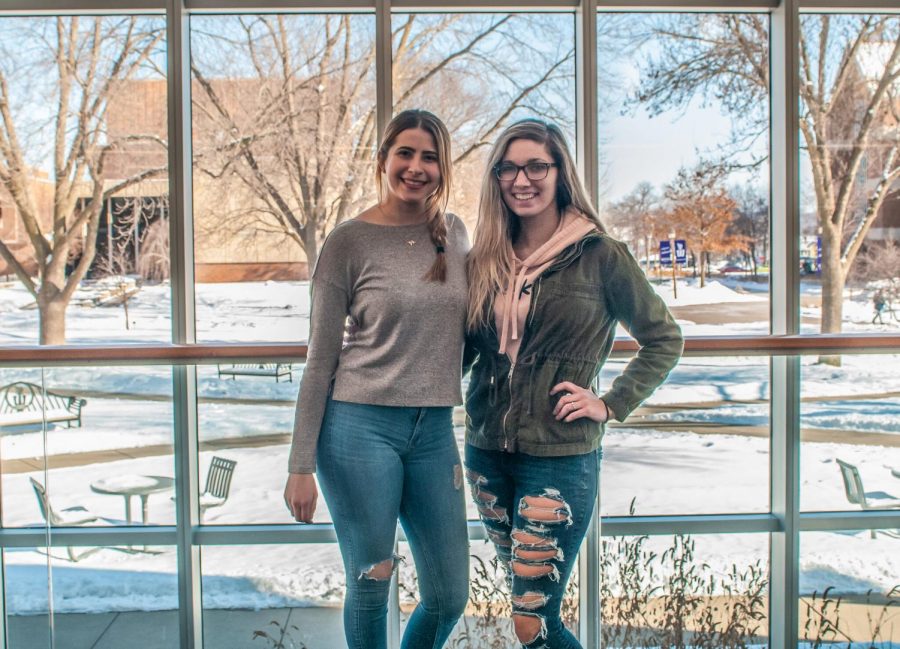 President of Pro-Choice club MacKenzie Hanson(left), a senior year Biology major with Vice President Jessica Rigby(right), a senior year Sociology major are seeking Student Senate approval for a pro-choice club on campus. Hanson plans on the new club being geared towards educating others and expressing pro-choice ideas and has currently 16 students officially signed up for the club.

The club would be a part of National Abortion Rights Action League(NARAL) Pro-Choice America, a pro-choice non-profit organization focused on ensuring reproductive rights, which has a strong Minnesota presence.

She said that once she realized the organization’s presence on several campuses across the state, she was interested in bringing it to Winona State as well.

“I was just really excited about the fact that that gave me a platform to just focus on things that I care about,” Hanson said. “Like body autonomy, people’s personal freedoms and their rights with everything along those lines.”

A group cannot be considered for Senate approval and official club status until it has at least 10 active Winona State students signed up.

Hanson made strides to meet that mark by posting about the club’s need for members on social media.

The post received more than 60 “likes” and a dozen comments, all displaying support for the hopeful club.

“I was scrolling on Facebook and saw that the organizer posted, and it really interested me,” Diana Zargarian, a sophomore nursing major said.

Hanson said that she currently has 16 students officially signed up for the club.

However, with more than 60 likes on her Facebook post, she is hopeful for more members once the club is official.

Hanson announced on Feb. 18 that the club’s application had officially been sent to Student Senate and is hoping for Senate approval within the next two weeks.

Winona State does not have any other pro-choice clubs on campus but does have a pro-life group: Warriors for Life.

Tensions rose during the fall semester when pro-life and pro-choice messages were scrawled in chalk across campus in a back-and-forth banter.

“As far as I know there wasn’t a concrete [pro-choice] club or anything at the time,” Hanson said. “It was just students getting together and responding to something that was happening on campus.”

Hanson said that she plans on the new club being geared towards educating others and expressing pro-choice ideas.

“Activities for the club would include film showings on reproductive rights and discussions on various topics, including fake women’s health clinics,” Hanson said.

The club hopes to unite those who share pro-choice ideologies.

“I’ve always believed that it is the right of whoever is pregnant whether or not they choose to have an abortion,” said Zargarian. “It’s not my business at all and it shouldn’t be anyone else’s.

Zargarian also said that she hopes the club will “actually start making changes in the Winona, southeastern area.”

Hanson said she hopes the group will be a positive force on campus and said that it will be “open to all genders, sexualities, races and other diverse backgrounds.”

Hanson also plans on working on ways to involve the community and alum in the club’s activities, as well as students who may have

“I know a lot of people have complex schedules so I don’t think people should be scared if they feel like they have a lot on their plate right now,” Hanson said. “I’m working on structuring the club in a way that people can stay involved with such an important topic.”

While Hanson will be president of the club and Jessica Harvey-Rigby will be vice president, there will be other positions available if the club is approved.

The club would also have treasurer and secretary/social media representative positions open.

Hanson said these positions would encourage further student involvement as she plans on allowing members to run their own social media campaigns.

The potential club’s first meeting has been planned for Tuesday, March 3 in Minné 104 where a 15-minute film on reproductive rights will be shown.