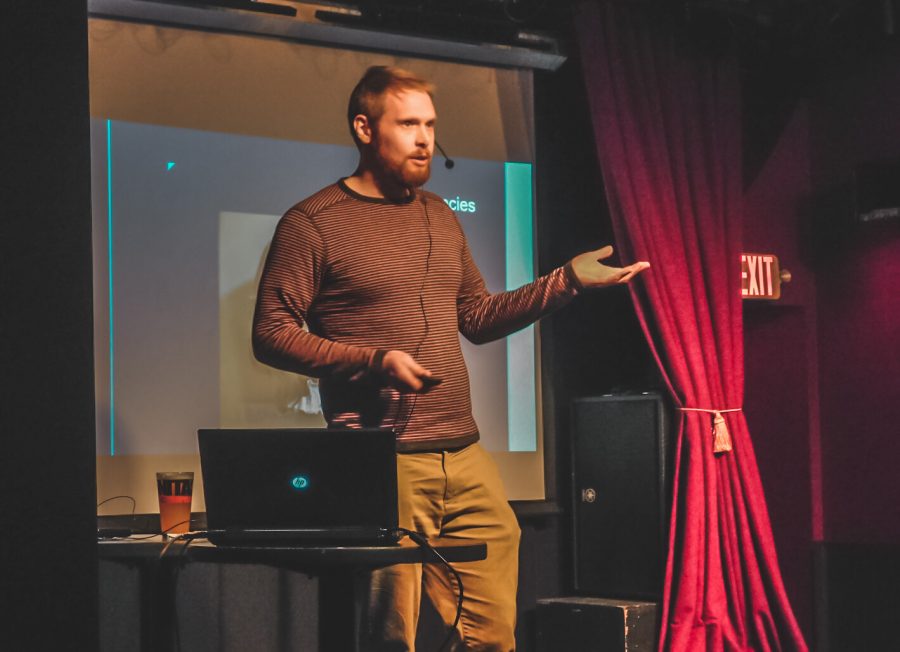 Patrick Clipsham, an associate professor of philosophy at Winona State University was one of the three speakers featured during Nerd Nite at Eds (no name) Bar on Wednesday, February 26th. He presented a philosophical analysis of the eight most common objections to ethical veganism.

Nerd Nite Winona celebrated its two-year anniversary this past Wednesday at Ed’s (no name) Bar.

Nerd Nite is an event that happens once a month at Ed’s, where people who love a topic so much that they share it with others and “nerd out”.

This model of Nerd Nite actually started back in 2003 in Boston by a graduate student who wanted to share his adventures and research with others. Now, Nerd Nite is held in over 100 cities worldwide including San Francisco, New York, Toronto, and of course, Winona.

Carl Ferkinhoff, a physics professor at Winona State University, was the one who started Nerd Nite here in Winona two years ago.

“It’s pretty crazy,” Ferkinhoff said. “The response has been really great, and I can’t believe it’s already been two years.”

Ferkinhoff said he helped run a Nerd Nite when he was in school and decided to bring it to Winona.

“When I was in grad school, I helped run a Nerd Nite there and really enjoyed it,” Ferkinhoff said. “When I moved to Winona, I thought it would be a good idea to bring that here since there was nothing like it nearby.”

Ferknhoff said that anything can fly when it comes to topics; it does not just have to be people from campus but also people from the community.

“Essentially, the idea is that learning things can be more fun when you’re out on the town rather than just sitting in class or at home,” Ferkinhoff said.

Every Nerd Nite has speakers present on a topic about which they are passionate.

“Three people get up and talk for about 15-20 minutes about something that they ‘nerd out’ about,” Ferkinhoff said. “It could be their own research, something related to their work or their own hobby.”

Past speakers include many people from the community, many professors from Winona State, and even President Olson.

This past week the talks included topics such as special needs pets, veganism and traffic stops.

“I have three animals of my own with special needs right now so I’m just talking about the importance of why you shouldn’t pass them up,” Pflughoeft-Job said.

Pflughoeft-Job said she has been going since Nerd Nite started in Winona two years ago.

“It’s hard to believe it’s been two years already and it’s really cool to be speaking at the two-year anniversary,” Pflughoeft-Job said.

Pflughoeft-Job said she always has a good time there and has rarely missed a night.

“A friend of mine told me about it so we went the very first night it started and absolutely loved it,” Pflughoeft-Job. “We just kept going back and I think I only ever missed two nights and only because I was sick.”

Pflughoeft-Job said she is not usually a person who does public speaking, but finally decided to give her own presentation.

“I don’t really know why I decided to finally do it,” Pflughoeft-Job. “It’s something that I really like and am passionate about, so I’m taking that passion and spreading it to others.”