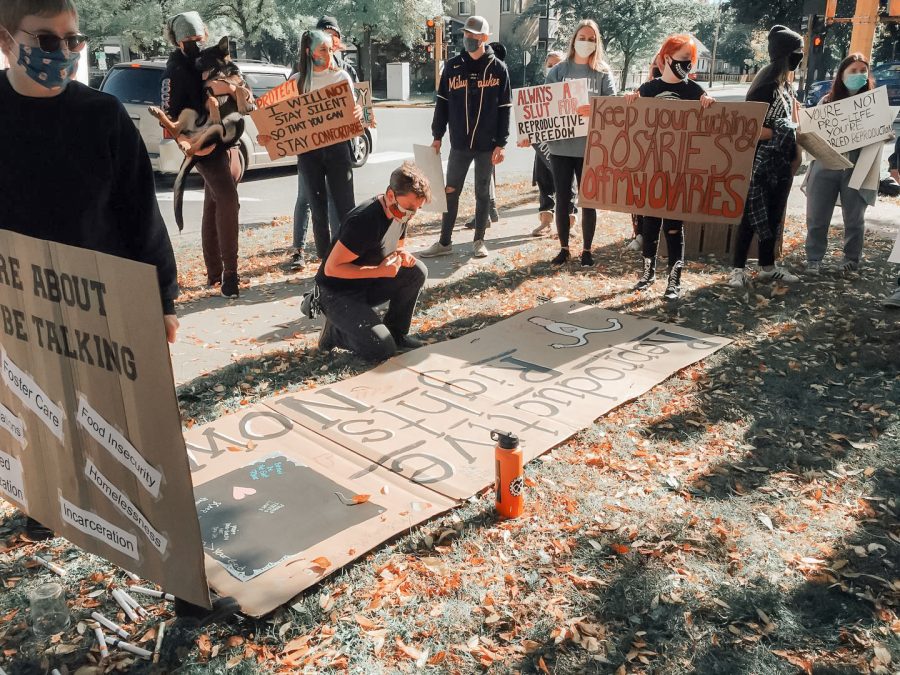 Pro-choice supporter signing the largest sign brought to the protest of the National Life Chain’s event while others gather nearby with their own signs near Winona State University’s campus and Windom Park on Sunday, Oct. 4.

The National Life Chain that took place in Winona was put together by Kathy Foerster, a community member.

According to Foerster, the National Life Chain occurs all over the U.S. and Canada, and 2020 was its 33-year anniversary. The event takes place on the first Sunday in October, or Respect Life Sunday. The event consists of a silent hour of prayer to reflect on abortion.

Sydney Dumond, the president of Winona State’s Pro-Choice club, learned of this event from her Women, Gender, and Sexuality Studies (WGSS) professor. The professor reached out to the club’s advisor and asked if they had heard of this event.

Jamie Scherdin, the president of Warriors for Life, said the hour of silent prayer was interrupted when the Pro-Choice Club walked down the sidewalk, playing “WAP”, a song by Cardi B and Meg Thee Stallion with strong sexual connotations.

Neither Foerster nor Scherdin were shocked by the appearance of the protesters.

“I wasn’t surprised that protesters came, as the prochoice group from WSU has tried to disrupt our peaceful Life Chain for the last six to eight years,” Foerster said.  “I was surprised by the number this year – over 40.”

Scherdin said she had prior knowledge that protesters would show up.

“I did have slight knowledge of it beforehand,” Scherdin said. “I didn’t know if they were going to come interrupt our silent hour, but I figured they would.”

What occurred next is heavily debated.

Foerster said that the Pro-Choice club crowded around her group, shouting profanities.

“I was shocked at the crude messages on the signs and the language of many of the college students,” Foerster said. “They were loud and disrespectful.  One even had a mega phone and shouted out phrases like ‘I love killing children’,  ‘I hope you get COVID and die’ and ‘This is my body and my F…….choice’.   It was most crude behavior and language.   I was sickened that the children and young people in our group were exposed to this atrocious behavior.  It left many of the adults visibly shaken, as we felt the hate and disrespect from the WSU Pro-Choice students.”

“I have a video of a woman telling me she would laugh if I were to be raped, I have them calling us fascists, I have somebody telling a young child who was 12 years old that they were going to show up to his house and show him who the real men were,” Scherdin said.

Scherdin said she was disappointed, as she expected a calm discussion.

“I was hoping the engagement would be civil,” Scherdin said. “This [would have been] a great opportunity for people driving through town to see that we have a school here with two different sides of an issue and campus allows for all groups and all types of thinking, and they could see that everyone can voice their opinion. That would be something that would be so great for our community to see that college students can be civil with one another.”

Foerster also said she was displeased with the way the protesting occurred.

“The students have a right to protest, but to act out like they did last Sunday – how can that be beneficial?” Foerster said. “It only creates more division.  What happened to peaceful demonstrations and civil discourse?”

However, Dumond denounced most of these claims.

“My response to the accusations from the Warriors for Life club that we name-called them and talked about them getting raped and killed is just that- they’re accusations,” Dumond said. “While I wasn’t able to be near the pro-life side, I didn’t hear any of those things. I wish that the person who posted that would have come directly to me and asked me about it first, as I did not hear any of those things.”

Dumond said that one club member came to her and admitted to saying, ‘we are going to listen to a white girl again?’. Dumond says that she fully supports the member saying that statement.

According to Dumond, the Pro-Choice club had been unable to have official meetings before this event, meaning that some people who showed up were community members instead of members of the club.

“It was a protest open to the public, so while I tried to control the actions of people there as much as I could, I am one person and it isn’t always easy for one person to control all those things,” Dumond said.

Dumond said that she herself tried to be respectful to those on the National Life Chain side.

“I tried to engage in conversation with them,” Dumond said. “I asked if I could interrupt their prayer. Some of them would talk to me but most of them just continued praying, after which I would respect them and move on.”

According to Dumond, her experience of the event was the National Life Chain praying and the Pro-Choice Club stating their beliefs.

Dumond said she would like to issue an apology to members of Warriors for Life.

“I would like to apologize to [Warriors for Life] if they heard those things,” Dumond said. “That isn’t right and that isn’t what we at Winona State Pro-Choice Club support at all. We are here to support reproductive rights. We do not want anybody getting raped or killed.”

Both sides additionally accused each other of not complying with COVID-19 regulations.

“I declined a mask,” Foerster said.  “We were standing far apart, except for family groups, and a mask is not required.  I found it ironic that the many college student protesters would crowd out the people who were praying.  They were definitely not social distancing.”

Dumond said that the National Life Chain side should have been wearing their masks.

“There were people without masks on the National Life Chain side of things,” Dumond said. “They were on campus, so they should have been wearing masks. I was offering people masks, so if they’re upset about that, I was just doing my job as a Winona State employee.”

Dumond added that she talked to people on the National Life Chain side, who said that they were not wearing masks because they believe COVID could not be spread outside.

Dumond also said that Winona’s Life Chain is not affiliated with the National Life Chain.

These events took place nearly a year since the chalking incidents last fall, after which the Pro-Choice club was formed. Pro-choice students had crossed out and erased pro-life messages that had been written near the Winona State gazebo. Winona State has since updated their rules on chalking.