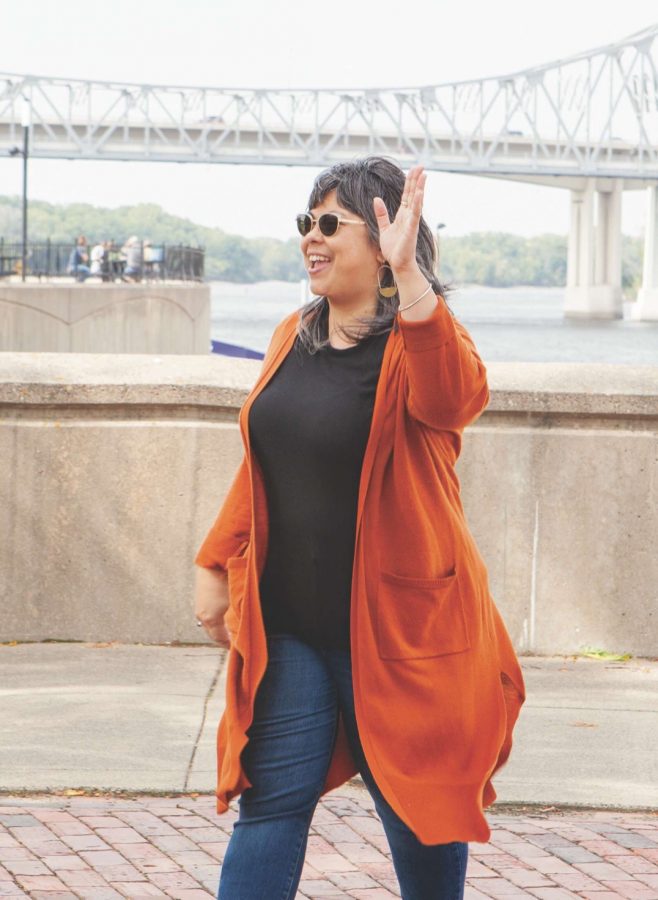 Jovy Rockey, a small business owner of eight years, is running for mayor of Winona against Minnesota native, Scott Sherman.
Rockey has lived in Winona for 12 years, and is the owner of Jovy Rockey Jewelry, a store on Third Street in Winona. She is a mother of three boys, two of which still live at home. Rockey has had her jewelry store for eight years but has had the brick and mortar location for two years.

In addition to running her business and spearheading collaborative arts events, Rockey says that she started to consider running for mayor about a year ago, after the current mayor, Mark Peterson, announced his plans to retire. Rockey later decided that, if Peterson did not run again and nobody who mirrored her values ran, she would run for mayor.

During the shutdown in the spring, Peterson announced he would not be running for reelection, and Rockey said she felt as though it was important for her to run.

“I didn’t think [the person running would] have to be me, but I want someone who will champion the things that are important to me,” Rockey said.

Since Rockey started campaigning, there haves been a few issues that she says she holds close to hear heart: promoting the local arts and culture scene, expanding and promoting outdoor recreation and finding more ways to foster small businesses in Winona.
Fostering small business has been one of Rockey’s main focuses. She says her idea for her small business portion of her platform came from her experiences as a small business owner.

“My lived experience really is where that desire is rooted. When I moved here, I was a single parent,” Rockey said. “I had just gotten out of a really bitter divorce and struggled a lot.”

After Rockey met her current husband, she said she began to struggle less financially, but still sees how it is hard for small business owners to succeed, even after a few years of starting the business.

“It has taken a lot of hard work and grit to get to where I am at this point now. I may own a business, but I am not wealthy by any means,” Rockey said. “I just think of all of the things I did to get myself to this point and how it would have been nice if there were more resources or I felt like there was more opportunities within the city.”

Rockey said that she wants more opportunities for people to thrive in Winona. Because of this, Rockey has a few plans to help foster the growth of the commercial corridor in downtown Winona.

One of these plans is a proposed commercialized subsidized rent program, which has shown success on other communities.

“[Under this plan, the government] puts a certain amount of money aside each year and someone can come with a business plan for a very particular sector of business, things like retail, restaurants and bookstores, that kind of thing that brings a vibrancy downtown,” Rockey said. “They would come with their business plan, they have a committee to review it, and if they felt like it was a sound business plan, they would get them into this program.”

Once a business wasis accepted into this program, the committee would grant them a certain percentage in rent for a set number of years. Rockey gave the example one community used, which would be a three-year tiered assistance program. Under this program, businesses are awarded 25% of their rent the first year, 15% their second year and then 10% in the third year.

Rockey said that in order to have a successful business, many need additional support, especially during the first year.

In addition to rent assistance, Rockey said that she would like to see more access to low-interest micro loans for small businesses.

To combat this inequality, Rockey said she wants to focus on equity and advocacy for all people.

Rockey said that though she had a few “prongs” on which she ran her campaign, her time running for office has taught her a lot about the needs of the community. One of these items is affordable housing.

“Since campaigning, a real passion of me has been affordable housing. That was not at the top of my list when I started,” Rockey said. “Housing has [now] definitely risen to the top. You can have all of those things [like business and employment opportunities] but if you don’t have housing opportunities for all different levels, it is really hard for people.”

According to Rockey, her passion for affordable housing was ignited by talking with others in the community. Because of that, she realized Winona is low on middle-income housing.

Another pending issue has been the “town and gown divide”, which references tensions between local community members and college students. She described this divide as “unfortunate” and stemming from a disconnect between college students and the town.

In order to combat this divide, Rockey says she wants to find ways to get students into the greater community through partnerships, civic opportunities, collaboration and mentoring opportunities.

“I believe that the more that people can get involved and interwoven into outside of campus, not only will they feel more ownership and interest in the community, it will [also] help the community see students being involved in all of these things,” Rockey said.

Rockey specifically pointed out the efforts of Winona State University’s director of Innovative Community Engagement and StartUp, Will Kitchen.

“[StartUp] is really centered around the entrepreneurial ecosystem and Will Kitchen just has the right vision where he is just trying to find the right internship or mentorship opportunities to get out into Winona with other businesses,” Rockey said.

Rockey also said that, if she is elected mayor, she would be willing to have students shadow her.

Rockey said that she had to relearn a lot of what she knew about what it took to campaign for local office, given the social distancing restrictions due to COVID.

“[COVID] was a big part of my decision-making process,” Rockey said. “I am in a high-risk category—I have a couple of autoimmune conditions, and so I didn’t know what it was going to look like. Do you still door-knock? Do you not? Door knocking is a big thing, especially for local elections.”

Rockey said that, luckily, she has a social media and marketing expert who has played a major role in the campaign. In addition to that, Rockey said that the grassroots efforts have been very helpful.

Rockey said that, in addition to several videos she released during the primaries, she has done park tour events and Zoom town halls to help her campaign.

Though she views herself as a strong candidate, Rockey did acknowledge some peoples’ hesitance towards voting for her.

According to Rockey, some people are concerned with her lack of governmental experience. However, she does believe she has methods to overcome this challenge.

“The way I overcome that is just by always learning and asking lots of questions. I’m not afraid to say if I don’t know, but I’m also not afraid to find out,“ Rockey said.

No matter who people intend to vote for, Rockey said knowing how to vote is the most important thing.

“Regardless of the candidate you vote for, [people should understand] how to vote and what those timelines are,” Rockey said.