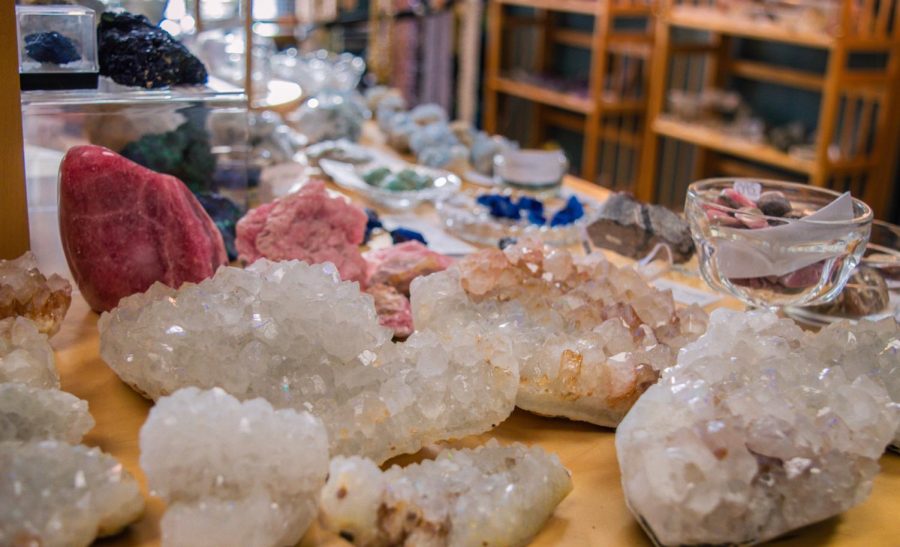 Genie’s Rock Shop is located in Downtown La Crosse. From rocks and crystals, to tarot cards and pendulums, Genie’s will surely fit your metaphysical needs.

On the second floor of a mall in busy downtown La Crosse lives a sanctuary from the craziness of the outside world. Patrons say that after taking the initial step inside the store, a wave of what can only be described as ‘calm’ washes over you. Inside, there are no cars honking, no bustling streets and no overdue assignments. There are only rocks.

Immediately, your eye in drawn to the large selenite wands, which coincidentally have calming and peace-bringing properties. Perhaps the selenite is part of the mystical calm of the store.

Diagonally from the selenite wands, past the table of pendulums and athames, behind the jewelry counter, stands a petite woman in her sixties humming melodically to songs she has made up in her head about her day.

Genie’s Rock Shop opened five years ago when Genie discovered her obsession with rocks and crystals.

She and her husband, who had recently lost his job in the automotive industry, moved to Madison to find work. Genie, who had previously worked in the natural food industry, decided to get a job at a nearby metaphysical store. It was here that ultimately introduced her to the new love of her life: crystals.

She later decided it was time to open her own store in La Crosse. At first, Genie said they only wanted to stay open Thursday-Sundays to leave time to work a second part-time job to help finance running her own store. She never found that second job, saying that running Genie’s is a fulltime job on its own.

“If I’m not at the store, I’m cleaning and stocking and ordering and doing paperwork.” She groans at the last item.

Genie says that the calming atmosphere is created by the special attention she pays to her crystals.

“I used to always be very meticulous as far as keeping all the crystals clean and the store clean,” Genie said. “The more attention you pay the crystals, the more alive they are.” She is almost grinning on the other side of the phone call.

These days, Genie is not able to clean the crystals as much as she used to; she broke her ankle during quarantine.

Back when she first began working with rocks and crystals, Genie would tell people that her favorite was Obsidian, a black almost glass-like igneous rock that creates a strong shield against negativity and assists in drawing out mental tension and stress.

Now, as Genie looks around the home she shares with her husband, she sees that she owns an abundance of Smoky Quartz, a stone she insists everybody should have. This stone, like Obsidian, neutralizes negative vibrations. It also protects against fear and assists in lifting depression, stress and anxiety.

Witches, Christians, Buddhists, Hindus, agnostics, and just about any other religion you can think of come together to discuss their love of crystals. Genie herself has dappled in just about every major religion under the sun.

“Ever since I hit 18, [I loved] the metaphysical side of things,” Genie said. “I went into a few very different religions very seriously. I was raised Catholic and I love the magic of Jesus. [Religions] show that there can be magic in the world. I am Native American and it gives me this feeling of one-ness with all of the rocks.”

Genie has also explored Hinduism, Mormonism, Judaism, and more. She says that each religion has similar basics: doing good unto others.

Genie has also studied and taught classes on divination-seeking knowledge by supernatural means. In her store, she sells various divination tools such as tarot and oracle cards, pendulums and runes. These classes have been cancelled until further notice due to COVID-19.

Genie herself has studied divination methods such as numerology, astrology, I-Ching, and many others throughout her life. More recently, she does not practice divination as often, but still reads her I-Ching every morning.

Her favorite part of running the store?

“The crystals! I love rocks.” Genie said. “It’s not work. I could be cleaning or displaying them and it doesn’t feel like work.”

Genie loves the appreciation her patrons have for her rocks.

“People love the rocks and I love to see it and share that with them,” she said.

Genie’s Rock Shop is much like selenite–it brings peace and calming energy. But most profoundly, it brings people together.