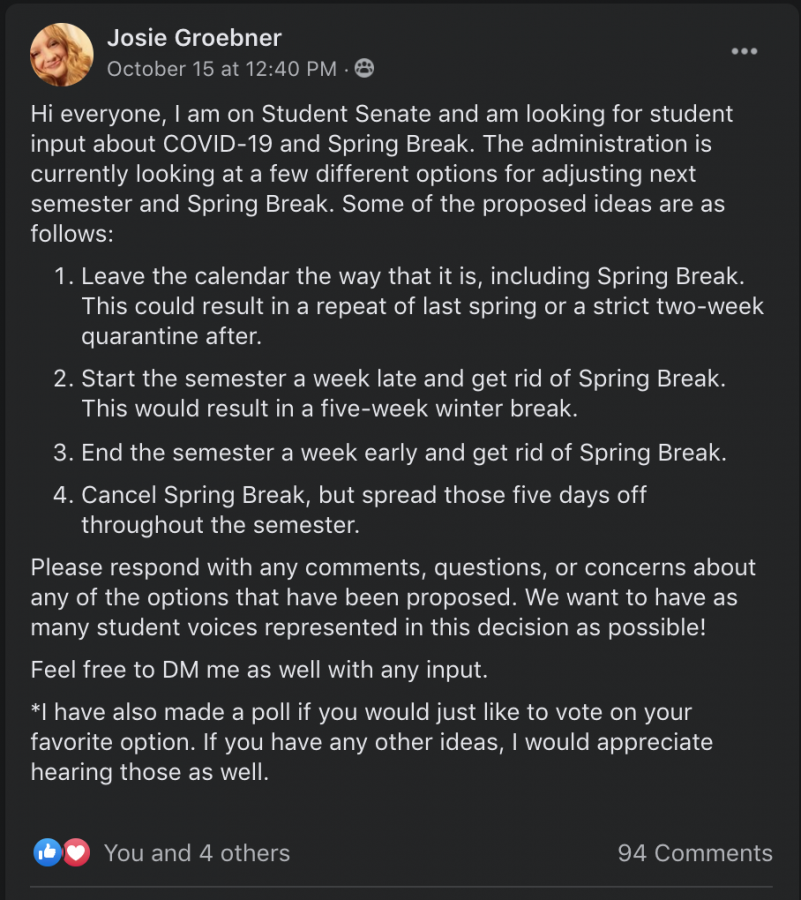 Josie Groebner posted a survey on the Winona State University-Class of 2022 Facebook group asking for opinions from students about what the university should do regarding spring break in the midst of the COVID-19 pandemic. Many students responded to the survey with varying opinions.

Winona State sent out an email to all students on Oct. 15 that included a “Spring Break survey” meant to gauge student opinions for university President Scott Olson and other leadership members to consider.

Spring Break is currently scheduled for March 8 through March 12, 2021.

The survey said the university wants to avoid potential COVID outbreaks after Break when students may be travelling and spending more time off campus.

The email also offered students the option to share their thoughts on Spring Break to Student Senate.

Student Senate member and junior class representative Josie Groebner was one member who posted a survey on Facebook.

Groebner posted the survey in a private Facebook group called Winona State University – Class of 2022, which has 890 members.

Groebner’s options included the same three options as the Winona State email survey as well as a fourth: tacking on a fifth week to Winter Break and getting rid of Spring Break entirely, starting the Spring semester a week later.

Lily Hollerich, a third-year student majoring in movement science and psychology, commented in support of leaving Spring Break as is and having a two-week quarantine afterwards.

“The semester is already long enough and I believe many kids look forward to Spring Break as a break and the ability to regroup,” Hollerich said. “Also, many people have potentially made plans that are irreversible. I know many families try to plan trips with their kids around Spring Break.”

Groebner also posted a separate poll in the Facebook page and found that most students were in support of the first option.

“After my initial post was up for a little while, I also posted a poll,” Groebner said. “Both my post and poll showed that students were more in favor of keeping the semester the way it is with Spring Break for various reasons.”

Groebner said she received over 200 votes on the poll and a few private messages from students sharing their opinions and asking questions.

More than half of those votes were in favor of keeping Spring Break dates as is, she said.

However, there were students commenting in support of each option.

“Having spring break promotes travelling and exposure,” Schramm said. “Splitting up the days throughout the semester or ending early would be a safe option.”

“I’m scared of spring semester turning into last year’s spring semester because I’m personally someone that feels as though my education is being limited by Zoom,” Sumter said. “I have much more motivation to do schoolwork here in Winona rather than at home.”

Groebner said that while her data from students showed favorability towards keeping Spring Break dates as is, another student senator found otherwise.

“A fellow senator who also gathered some information from other student Facebook groups found more students who responded to her favored ending spring semester early and getting rid of Spring Break,” Groebner said.

Groebner said that Student Senate did not come up with the options for Break themselves, but that President Olson and Denise McDowell, vice president for enrollment management and student life, did.

Olson and McDowell presented the options for Spring Break to Student Senate on Oct. 12.

While Student Senate had to maneuver COVID guidelines and restrictions by moving their weekly meetings online via Zoom, they are finding new ways to connect with students.

“It may be more difficult for students to contact senators in some cases because most students don’t have to be on campus if their classes are completely online,” Groebner said. “However, it has forced us to become more creative in the ways that we are connecting with students and finding ways we can best serve them.”

Student Senate members decided to reach out to students via social media and other means because the university had already planned to send out an all-student email.

“This is typically something that the administration would contact students about to get their feedback,” Groebner said. “I chose to post on Facebook because I wanted to get feedback from the students to bring back to the Student Services Committee and Student Senate.”

“We want to be together for as much of the semester as possible and that counts on you,” Olson said.
Winona State remains at “level two” or the “yellow level” in regard to its Campus Safety Levels, implemented to gauge COVID levels on campus.

There was an increase in positive campus COVID cases during the week of Oct. 15 after nearly a month of decreasing cases, although the latest report on Oct. 23 reported a downward trend again.

As of Oct. 23, there are 48 reported positive COVID cases on campus, down from the week of Oct. 15 which had 55 active positive cases.

Unlike with Spring Break, Winona State did not do a student survey for how the university will proceed after Thanksgiving Break, occurring Nov. 26 through Nov. 29.

The university decided to move the majority of classes online after Thanksgiving Break.

These classes include labs, clinicals, performance courses and field experiences.

Residence halls and various on-campus facilities will also remain open after Thanksgiving Break, but only for students, staff and faculty.

Currently, Winona State’s campus is closed to the public.

Student Senate President Clara Kuerschner did not comment on the Spring Break situation.

Groebner did not say which Spring Break option Student Senate and the university were leaning towards at this time.