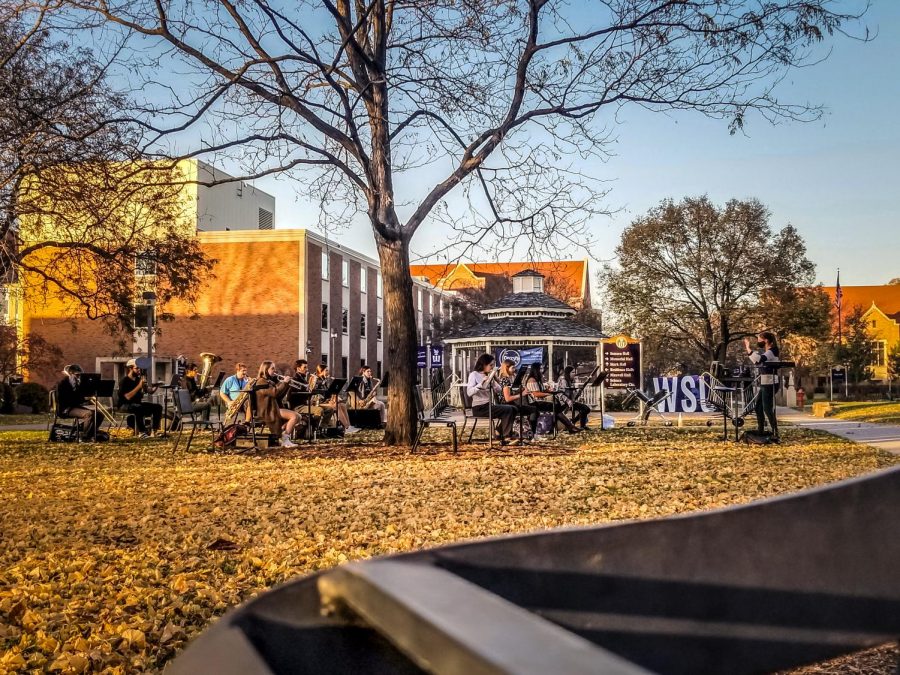 The bubbling notes of Wolfgang Amadeus Motzart’s “Die Zauberflöte” rang out across campus as student ensembles practiced outside on campus the afternoon of Nov. 4.
The rehearsal was held outdoors in response to COVID-19 and due to repairs on the roof of the DuFresne Performing Arts Center that required students to not be on the mainstage.
The Winona State University saxophone choir and symphonic band performed in small groups called sectionals.
Melanie Brooks, director of bands at Winona State, said the band practices in smaller groups outside in response to COVID.
“Normally we’re 80 people in a room with a big band,” Brooks said. “We’ve adapted to smaller groups and shorter rehearsals to minimize exposure.”
Brooks said outdoor performance is different but safer.
“When we practice outside, the air we produce when we play disperses” Brooks said. “It’s safer, it’s fun and it’s something different.”
In addition to physical distancing, players covered the instruments’ bells with cloths to minimize air droplet spread.
Third-year student Tyler Upham, a baritone sax player majoring in music education, said COVID presents both challenges and opportunities to grow as an instrumentalist.
“It’s been difficult. Normally we’re such a big group of 50-60, 70 in the band, making big, beautiful sounds,” Upham said. “The counterpart is we’re in smaller groups and focus on our own band and play a little more ‘solo-istically’ and hone in our own sound.”
Sax choir, led by fourth-year music education major Jake Edwards, practiced Edwards’ own arrangement of Eric Whitacre’s “A boy and a girl.”
Edwards said practicing outdoors sounds different.
“It’s a lot dryer, less reverb. It’s crisper almost. You can hear every individual,” Edwards said. “With no bouncing off the walls of a room it’s easier to hear wrong notes. It’s a blessing and a curse.”
Upham described the therapeutic value practicing music provides during COVID.

“One of the reasons I chose music education was that love and passion for music,” Upham said. “Sometimes, I dread the work going into the practice room but it can be very therapeutic. I’ll get lost in my own world with my own sound.”
In addition to practicing sectionals, band members were also preparing for a digital Honor Band showcase over Zoom. In an empty auditorium, saxophonists perform to a digital audience through microphone and video camera. Brooks said it’s year 42 of the event.
“It seemed a pity to have the streak stop at 42, so we are doing what we can to make this year’s honor band happen in a new COVID-friendly format” Brooks said.
The event will also include four composers from across North America attending and giving feedback on performances. Winona State music students will also present a Q&A to prospective high school students interested in the program.
Brooks said the opportunity to perform is a welcome change of pace many performers say they want to participate in.
“I wanted to do something that wasn’t just sitting on Zoom all day,” Brooks said.
Not all the performances will be led by Brooks, which she said was by design.
“I wanted to give students the opportunity to be leaders,” Brooks said.
Brooks said many students, such as the flute choir, jumped at the opportunity to perform.
“They’re really hungry for performances,” Brooks said.
Microphones and equipment for Zoom performances were purchased with CARES act funding. Three different performance venues have been outfitted with audio equipment.
Tom Hill, director of classroom application, said the technology is to serve students.
“It’s a fun way to use it that makes a difference to students on campus,” Hill said. “How can we keep moving and bringing in people off campus and expanding that reach? It’s all about how we can make it better for what they’re doing.”