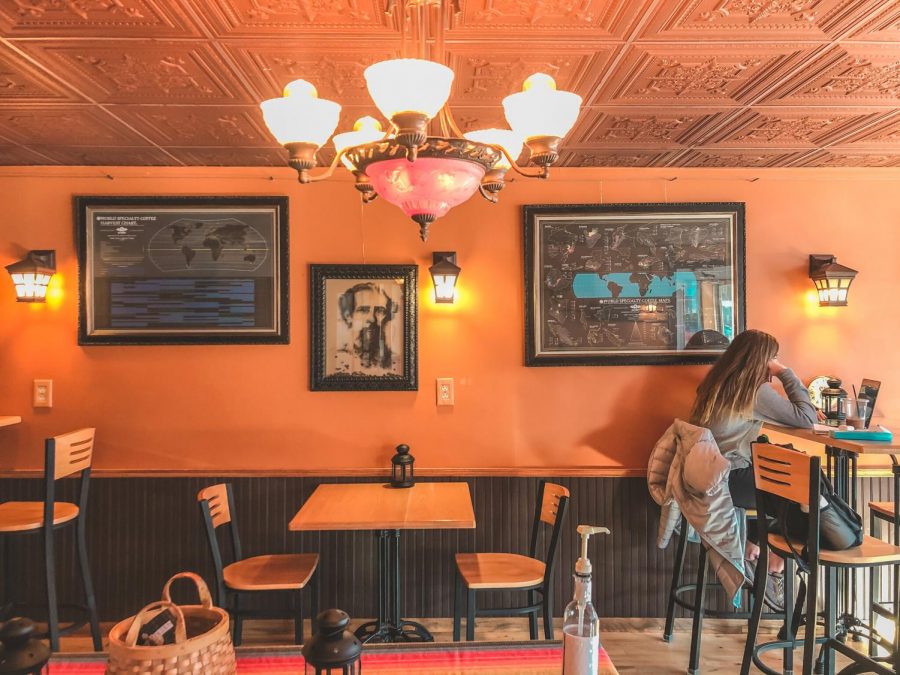 Mugby Junction on the Huff St. building completed their interior remodeling, during indoor dining shutdown by the executive order of Governor Walz. The cafe next to the main campus reopened on Jan. 11

Carew Halleck, owner of Mugby Junction, said the renovations were largely cosmetic, including removal of an interior wall.

“I took that wall down and added an oak countertop. Now you can see the espresso machine. I built the tap so it’s like cast iron, and it’s mounted right on top of the counter,” Halleck said. “I’m trying to make more of a physical connection for the customers.”

Halleck said COVID-19 hampered the business’s operations significantly, including a change in hours and customers.

“We used to be open until 11 p.m. Everyone was there studying, calling over each other. It was an awesome ambience,” Halleck said. “We could look out the windows from the cafe between 8 a.m. to 3 p.m. and there’s hundreds of people out there walking. Now, it’s like maybe a stray dog running across and that’s it. It’s really a hard time to have a cafe.”

Halleck said he is changing his COVID hours to make up for the change in business.

“We are extending our hours on Sunday instead of 8 a.m. to noon, we’re open till 2 p.m. and will try that. I feel like I need to extend ourselves a little bit in the afternoon, especially on weekends.”

“The university is trying to develop a system where they can take us off campus. Hopefully we are going to be one of their beta testers, and we’ll be able to accept purple passes,” Halleck said. “I’m a huge proponent of trying to work with them on that, so hopefully by next fall that will be in place.”

Mugby Junction serves Winona State students, but with graduating student turnover, the most consistent customers are from the surrounding community.

“I know my repeat customers by name; I know some of their kids’ names. We’ve had customers who have been coming in for 18 years,” Halleck said. “I have several friends who I’ve met because they were customers.”

“I love getting their hot chai because that’s what I got with one of my friends who used to work at Mugby the first time I was here,” Medin said. “I’ve been getting it ever since.”

Jaclyen Schley, a Winona State English alum, said her and Medin appreciate the atmosphere of Mugby Junction.“The atmosphere is pretty good,” Schley said. “Back before COVID started, we used to come in here and write all the time.”

“Everyone has heard of “A Christmas Carol” or “Great Expectations” but nobody has ever heard of “Mugby Junction”, so I thought ‘Oh, perfect! I’ll name my business after that,’” Halleck said. “Our main blend is called Pickwick and that’s after “The Pickwick Papers” by Charles Dickens. I pull a lot of literature, literary references, which honestly impresses nobody, but I like it.”

Halleck named a recent roast the Decameron Blend after a book written by Giovanni Boccaccio during the Black Plague.

“I had to name one of our blends after a pandemic while we’re in one,” Halleck said. “I have to balance out between really nerding out and being clever and also being interesting to your average person who really just wants to drink a cup of coffee.”

Halleck tried to expand the business to Rochester within the first years of success, but the two drive-thrus weren’t as profitable as he hoped.

Halleck said the Rochester venture was a painful lesson.

“We started the drive-thru in Winona, it was widely successful, and when Walgreens and Walmart came in, we thought we were genius. We opened up in Rochester, and it was really, really hard for a few years,” Halleck said. “That was the hardest for the business, personally and emotionally. Honestly, it was a form of PTSD. It was so traumatic. I don’t ever want to risk that again until all my debts are paid off.”

Mugby Junction’s Huff St. location is a campus landmark, pointed out on tours and loved by many newcomers to Winona.

In addition to his two locations, Halleck personally delivers whole bean coffee to customers living within the surrounding area.

“My favorite has always been iced coconut latte. I love coconut. It reminds me of the beach. But I do also love just a good latte, steamed milk, shots of espresso.”