Profile: Rookie reporters for the Winonan 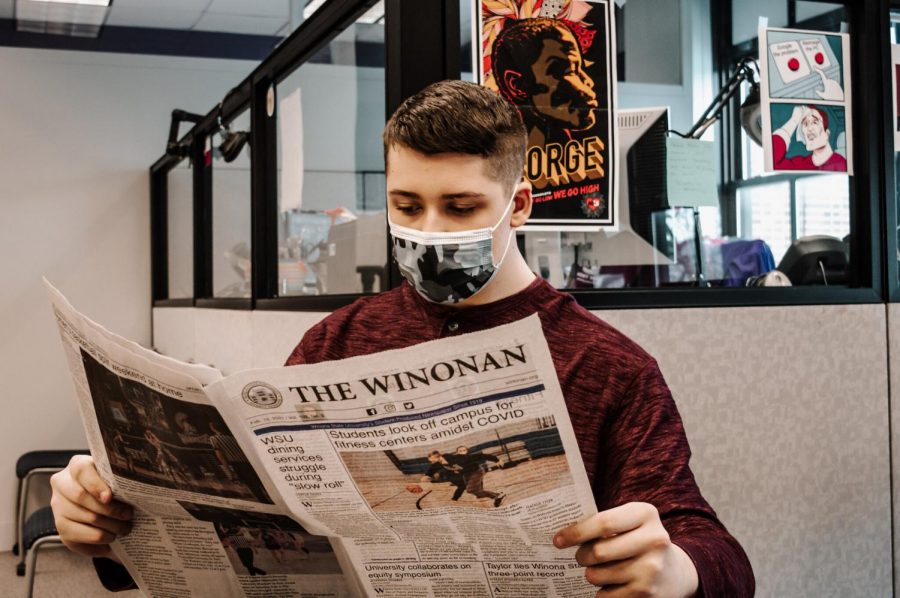 Gavin Jacob, a freshman majoring on Computer Science, following the articles published by the Winonan. Three new reporters joined the Winonan this semester, none majoring in journalism.

Three new reporters joined the Winonan this semester, a unique twist – none major in journalism. They each vary in experience, interest and future goals and write for different sections. Here are their stories.
Syerah Mulhern-Allred is a second year pre athletic training student, student senator, Alpha Sigma Tau member and sports reporter.
Mulhern-Allred said a love for both sports and writing brought her to the Winonan.
“I was constantly told I should be an English teacher,” Mullhern Allred said. “Writing is something that I kinda always enjoyed.”
When choosing a section to write for, Mullhern-Allred said her choice was simple.
“I work in sports for eight hours every single day,” Mullhern Allred said. “So that’s something that I’m really familiar with, I guess. And it just felt comfortable.”
Mullhern-Allred said she will apply her experience at the Winonan to a different path within the field of athletics.
“I’m an athletic training major and then a strength and conditioning intern. Those are two very different fields that are also very connected,” Mullhern-Allred said. “Adding sports journalism really ties in with that as it gives me another aspect to look at sports with.”
Mulhern-Allred noted the value of freedom of expression as a student journalist.
“If there wasn’t freedom of the press, Then I guess voices wouldn’t be heard and then it’s important to have those student voices and like be able to be heard by a larger audience.”
This representation role is also evident in her role as student senator for the college of nursing and health sciences. Fellow student senator representative for the first-year class, Mitch Prosser, is a first-year legal studies and news reporter.
Prosser echoed the importance of freedom of the press.
“It’s important because I feel like if there’s freedom of press you can really report the facts and you can also include your opinion with those facts,” Prosser said. “But if there wasn’t a freedom of the press, you’d be controlled then and almost locked down to one decision.”
In his role as news reporter, Prosser has written about virtual events, COVID-19 vaccinations and the cover story for the Feb. 17 issue, detailing the largest financial donation Winona State University has ever received.
Beyond reporting for the student community, Prosser said he is also building functional writing experience at the Winonan.
“It’s really nice to be able to write an article weekly, especially if you’re not in an English class,” Prosser said. “I feel like it’s also going to help me eventually if I get a job in journalism to have that experience and maybe even already develop a little bit of a portfolio. “
Teresa Anderson, first-year nursing student and features reporter said her involvement came from an interest in diversifying her education and herself.
“Yeah, I’m in nursing, but every single thing I join has nothing to do with nursing. And that’s because I don’t want my entire identity to come from my major,” Anderson said. “I want to be known for, ‘wow, she really tried this, this, this and this.”
Both Prosser and Anderson said they love writing but had to learn and adjust to the unique writing style of a newspaper.
“Like most high schoolers, I took my creative writing classes, really enjoyed those and I enjoyed writing on, but I’ve never like hands-on dove into journalism really,” Prosser said. “This was really my first experience with journalism and the AP style.
“I love writing, I’m just not the best writer, and I really want to grow in my writing skills, especially with AP style,” Anderson said. “My brother used to make fun of me all the time for how I write and that helped me immensely to become a better writer.”
Anderson predicted how she will apply her skills at the Winonan to her prospective career.
Just being very clear and consistent in my wording can help, especially when it’s life or death situations. So just taking my written format and bringing it to my everyday conversations can help a lot,” Anderson said. “Also, nursing, you’re always learning something new so consistently taking information they just heard and then being able to communicate it to someone else and a really fast turnaround is a really important skill.”
Anderson emphasized the importance of staying informed in a digital world.
“So, it comes down to understanding that you have to read from multiple different sources, actually talk to people and get more than one perspective,” Anderson said. “So that’s something I’m trying to learn more of, is reading both sides of every story to understand what I actually should be listening. “
Mulhern-Allred shared a similar sentiment about how being a journalist changed her perspective on campus.
“It makes me look at it from a broader point of view, kind of like I touched on before, it’s just important to be able to look at things from not so black and white, but from different views as well.”