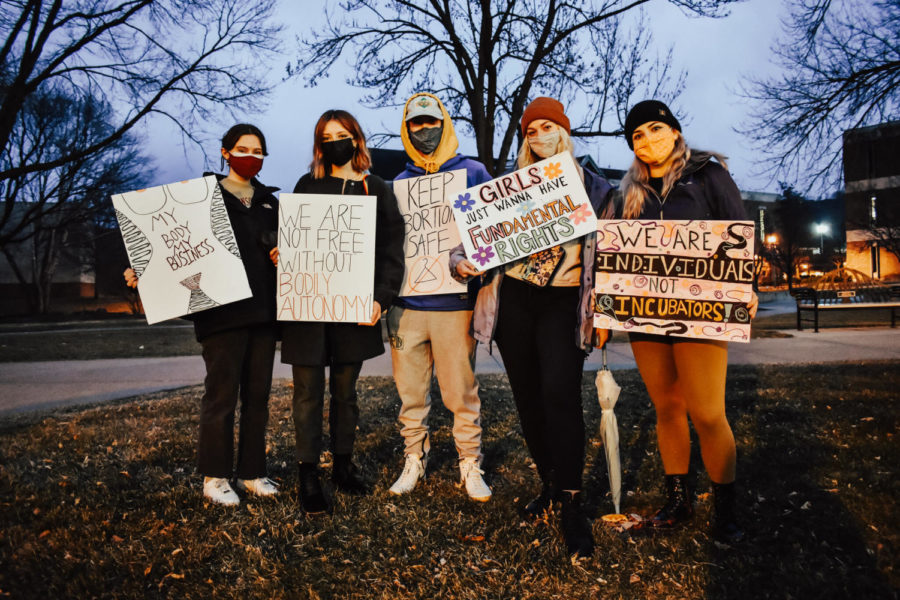 Winona State University club, WSU Students for Reproductive Justice, coordinated a protest of the Warriors for Life event that was held at 7:30 p.m. on March 22 outside of Kryzsko Commons. Roughly 45-50 people participated in the protest through reproductive justice-inspired signs, inlcuding the students pictured. COVID-19 guidelines were enforced by Reproductive Justice club members.

Scherdin, also a student at Winona State, said she submitted video evidence to the university regarding a remark made by a person attending the protest, saying they would “rape and laugh” at her.
Scherdin said the person who made the remark at the fall protest was also present at Monday’s protest, but she did not specify or point out who the person was.
“We talked to Alex Kromminga (Director of Conduct and Citizenship) and found out the remark was made by someone outside of the Reproductive Justice club,” Dumond said. “Nobody here wanted them [Warriors for Life club and Students for Life] to film. If they were afraid it was going to be violent, they should have brought it up to superiors.”
Scherdin said a Title IX investigation inquiry was submitted to the university but was “never followed up on.”
“We [Warriors for Life] are big proponents of free speech because without it, we wouldn’t be able to talk,” Scherdin said. “And the people here [protestors] don’t want us to talk.”
Hawkins said Students for Life sometimes publishes videos taken from events “that echo abortion is wrong, abortion is violence.”
However, video depictions of Reproductive Justice club students, or any attendees, “depends on how they behave,” Hawkins said.
Scherdin said the Warriors for Life is “hosting her [Hawkins] because we [Warriors for Life] held the most conversations on abortion last year, so we got a grant to host.”
The Students for Life originally was called American Collegians for Life, which was created in 1988, before changing organization names in 2006. Also in 2006, the organization hired Hawkins.
Students for Life is a 501(c)(3) charitable organization that is tax exempt. This is notable because it is important for students to understand where the source of funding for the speakers and/or groups being hosted on campus is coming from, as it can typically reveal said speaker’s/group’s own affiliations and political leanings. This information can often be found through organizations’ finances and tax forms.
In 2019, Students for Life’s total revenue generated clocked in at roughly $12 million, as found in Students for Life’s 2019 990 tax form.
$3,935,951 million of total revenue was paid by fundraising from three mega donors: American Target Advertising (ATA), Hogan, Schenk and Paul (HSP Direct) and MDS Communications.
Richard A. Viguerie founded ATA, which is a conservative donor fundraising agency based in Virginia.
ATA provided Student’s for Life the largest sum of fundraised money, with $2,204,314 being retained by the organization.
HSP Direct, also based in Virginia, is a “powerful direct mail fundraising appeals for organizations and candidates with whom they share the values of conservatism, patriotism and integrity,” according to their website.
HSP Direct came in second, with $1,625,413 in fundraised money going to Students for Life.
Both ATA and HSP were direct mail contributions.
MDS Communications, based out of Arizona, “provides telephone fundraising services to pro-life organizations, conservative political causes, Christian ministries and relief organizations. The company mission is to lower the cost of telephone fundraising for non-profit organizations and to be a catalyst for change in the fundraising industry,” which was listed in their MapQuest description but absent from their website.
MDS Communications came in last, with $200,724 thousand donated through telemarketing fundraisers.
The Warriors for Life club is just one of the Students for Life’s 1,200 campus locations.
During the anti-abortion event, Hawkins touched on various hot button topics surrounding court decisions such as Roe V. Wade and health service centers like Planned Parenthood.
Roughly 45 people were in attendance.
Before entering the event, attendees were asked to fill out a form for COVID-19 contact tracing.
The Reproductive Justice protest and the anti-abortion event both had contact tracing forms, with the latter going an extra step, asking the visitor’s stance on abortion, giving the options: pro-life, pro-choice and in the middle.
Hawkins at one point during the event said she does not believe the United States needs Planned Parenthood, arguing their core services have been declining, while abortions have gone up.
However, according to Planned Parenthood’s annual 2020 report, abortion services declined to 3%, which was 1% lower than their 2019 annual report numbers, 4%.
Core services such as sexually transmitted infections and treatment services also saw an increase, not decline, from 50% in 2019, to 52% in 2020.
Roughly 30 minutes into the event, five protesters entered the Kryzsko hall located next to East Room.
The protesters stood silently with their signs, asking not to be photographed or videotaped, as Feliciano snapped pictures three feet away.
Hawkins also criticized that states are not required to report the number of abortions performed.

However, the Guttmacher Institute, which is a research and policy organization that focuses on sexual and reproductive health rights, stated that “States are not required to submit abortion data to the CDC, but the overwhelming majority do. To collect individual-level data, most state vital statistics agencies have designed a form that abortion providers use for reporting to the state.”
The Guttmacher Institute state law and policies website said ,“46 states and the District of Columbia require hospitals, facilities and physicians providing abortions to submit regular and confidential reports to the state.”
The Center of Disease Control (CDC) also states on their reproductive health page that the agency “began abortion surveillance in 1969 to document the number and characteristics of women obtaining legal induced abortions. Many states and reporting areas conduct abortion surveillance. CDC compiles the information these reporting areas collect to produce national estimates. CDC’s surveillance system compiles information on legal induced abortions only.”
So, while centralized abortion data is not required, an overwhelmingly large amount of states voluntarily provide the data.
Hawkins also stressed abstinence, at one point saying, “If you don’t want to get pregnant, don’t have sex.”
Hawkins presentation closed with a Q&A session, which was a collection of mostly pro-life supporters as well as several protestors.
The anti-abortion event lasted until 9:45 p.m.