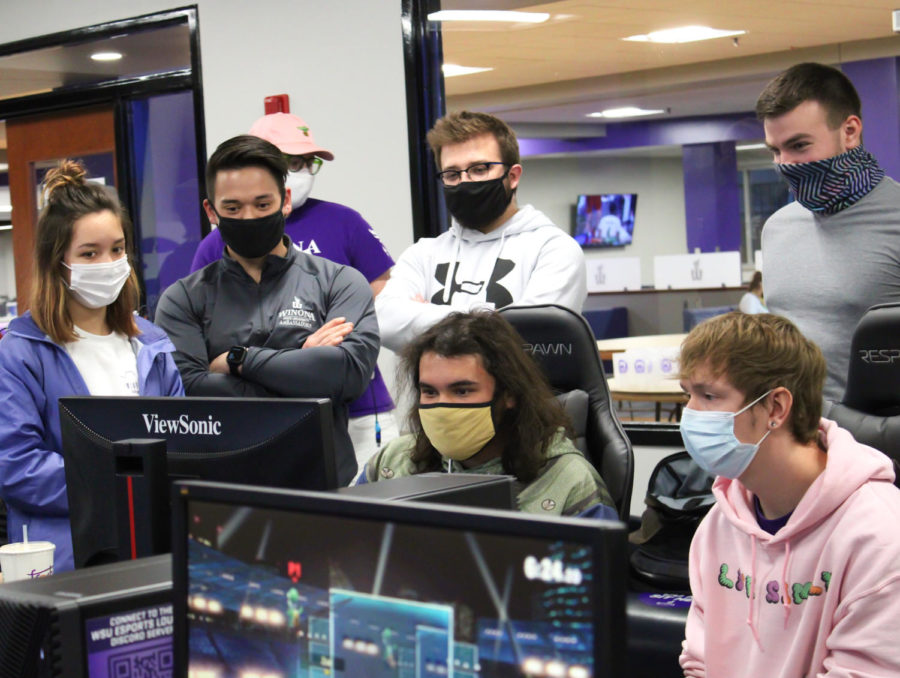 Last Thursday, March 25, students passing through the Student Activity Center around 7-10 p.m. could hear the excited chatter cheering ringing out from the Warrior Esports Lounge. The source was 24 people competing in a tournament from a series of tournaments that have been sponsored by Winona State University. Last week’s competition was in Super Smash Bros. Ultimate.
Super Smash Bros. Ultimate is a multiplayer fighting game for the Nintendo Switch. The game features a huge cast of over 80 recognizable, playable characters from a wide range of Nintendo games. Some of these characters include: Mario, Sonic, Link, Pikachu, Samus and more.
According to second-year student studying communication studies and Ike main, Samantha Soroos, the huge cast of fun and recognizable characters is a big reason she thinks the game is appealing to people who, like her, haven’t played Super Smash Bros. Ultimate before.
“The characters you can choose from, or the mains you can choose from. They’re all characters a lot of people know, there’s Yoshi, and Ike. There’s robots and Wii Trainers, so I think that is what adds to the fun aspect of it,”
Sooros said.
Fourth-year student and Pokemon Trainer main, Nicholas Austad, is president of the Winona State University Super Smash Bros. club. Austad commented on how the wide cast of characters makes Super Smash Bros. Ultimate ‘one of the best spectator games of all time.’
“You can attach yourself to any of those characters because they are all nostalgic characters from anyone’s childhood,” Austad said. “You already have an immediate attachment to the characters whether you like it or not.”
The wide cast of playable characters is appealing for casual players, but it also gives the game a great deal of depth. Austad commented how the game is both a good casual and competitive game.
“It is super easy to play, you can pick it up in ten minutes and play and have fun. It draws a bigger crowd than a lot of other games because of that,” Austad said. “It also gets super deep at a certain level and that is what hooks people. You can actually feel yourself improving from square one all the way up to professional.”
The Super Smash Bros. Ultimate tournament featured a prize pool. First place received $100, second place got $30 and third place won $20. Due to these stakes, the tournament had competitive rules.
“The Smash competitive ruleset is just making sure you get rid of anything that can affect the outcome of the game besides the two players,” Austad said.
The competitive ruleset for Super Smash Bros. Ultimate bans all items and all stages except for six predetermined by the competitive scene to not affect gameplay. The tournament was also done in a double elimination bracket format where players play to win the best of three matches in a set with each match running up to eight minutes and each player with three lives.
Timothy Petersen is a Link main and a third-year student who is a member of the Winona State Univerity Super Smash Bros. Club. Petersen described differences between Super Smash Bros. games.
“In Smash Melee, you learn the game really well and how mechanics work. Pretty much every character can do them to an extent. In Smash Ultimate you are learning more about the character specifically,” Petersen said.
Even though Super Smash Bros. Ultimate is character based, there are still several small technical things a player can utilize to improve their competitive gameplay. Some of these include: reverse aerial rushing, various combos, tech/breakfall, knowledge of frame data and more.
Despite all of these advanced things, Austad commented on the competitive side of Super Smash Bros. Ultimate being accessible for new players to reach.
“Anyone who wants to join Smash Club who doesn’t think they can learn those things, one of the beauties of Smash Ultimate is all the advanced techniques are easy to learn, you just have to know how to do them,”
Austad said.
Petersen wanted to mention how the Super Smash Bros. Club is open to anyone, casual or competitive.
“Any and all are welcome. If you have fun with the game, join Smash Club,” Petersen said.