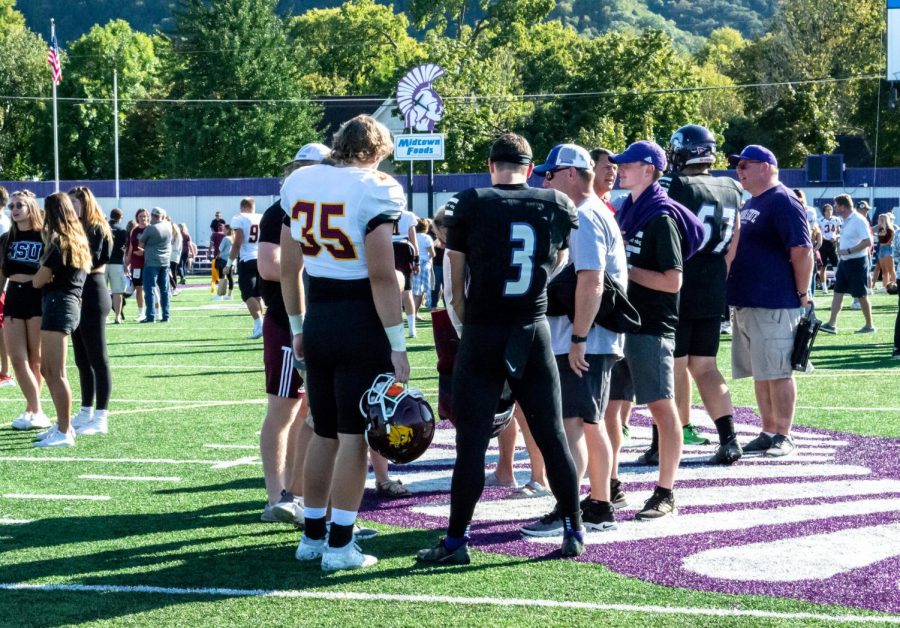 Winona State University’s football team nearly made a comeback to win against the University of Minnesota-Duluth (UMD) last Saturday, Sept. 18, losing 29-23 in a heartbreaker.
Winona State hosted UMD at home, coinciding with Family Weekend at the university, starting the game off slow and having to punt on their first possession. UMD started their possession off with trickery, setting them up to score the first touchdown of the game and running a 63-yard flea-flicker on their first play.
Winona State co-defensive coordinator, Brian Curtin, said prior to the game, “Duluth is going to move a lot of people around [and] do a lot of different things to try to distract our eyes. We’re not looking in the right place and in the right spots and that’s how they are creating a lot of big plays on the offensive side of the football.”
As UMD kicked back off to Winona State, fifth-year wide receiver, Jake Balliu, had a good return to set up Winona State with better field position. Winona State closed in towards the endzone but settled for a 35-yard field goal from first-year kicker, Jacob Scott, to put the Warriors’ first points of the game up on the board.
At the end of the first quarter, Winona State’s defense held UMD to 42-yard field.
UMD scored again with eight minutes left in the second quarter, handing it off to their running back for a one-yard touchdown and expanding their lead, 17-3.
Winona State was aware of UMD’s running backs potentially being an issue in the game, as Coach Curtin mentioned prior to the Saturday face-off.
“[UMD] has a couple nice running backs,” Curtin said. “They got some guys at these skill spots that can cause you some problems and running backs that are going to keep you honest in the running game. They play with three different guys back there that do a nice job.”

The Warriors fought to get points on the board during in the first quarter of the game, but by the second half, Winona State had given up 16 points. At halftime, the board read 26-3, UMD.
Owen Burke, fifth-year quarterback, explained how the Warriors were able to see what UMD’s team did well and what they should look out for in the game, based off previous game film they watched to prepare.
“They are really well coached,” Burke said. “They got good athletes and are pretty big upfront; They have a fast secondary; They kind of do something that we don’t see a lot in our league — seeing this much man coverage and this much pressure, so I think that’s what they got going well for them.”
After halftime, Winona State seemed reenergized, getting two defensive stops immediately.

With three minutes left in the third quarter, Winona State marched down the field. Having to go for it on fourth and two on the 20-yard line, UMD committed a pass interference to help keep Winona State’s drive going.
In the next play, Warrior first-year running back, Ty Gavin, ran it in from 10-yards out for a touchdown. With Scott hitting the PAT, Winona State inched closer to UMD, 26-10.
After UMD scored 26 points in the first half, Winona State’s defensive comebacks were strong, holding UMD scoreless in the third quarter.
To start the fourth, Winona State stopped UMD three yards short of the goal line, but UMD returned with a successful 20-yard field goal to make the score 29-10.
As Winona State took the field knowing they had to score on this drive, Burke delivered a strike to third-year wide receiver, Ethan Wittenburg, that went for 41 yards. After a couple of penalties from both teams, Burke passed it to third-year tight end, Jaylen Schleicher, for a 3-yard passing touchdown. The two-point conversion was not successful.

Winona State got the ball back with nine minutes left in the fourth quarter, still down 29-16. The Warrior family and student sections cheered on, stomping and slamming their hands against the wall between the bleachers and the field as Winona State’s offense ran back on the field.
As the Warriors moved up the field, UMD committed two pass interferences to further them up the green. Burke stepped up into the pocket and went deep over the middle to Wittenburg for 40 yards. This set up a three-yard touchdown run by Gavin. Scott hit the PAT, making it a one-score game with Winona State down just 29-23.
With 1:15 left on the clock, the Warriors got the ball back in their possession. In the first play after starting the clock again, Burke heaved the ball up into the air to second-year wide receiver, Sawyer Maly, for a 46-yard reception. The crowd rose to their feet, clapping and cheering on Winona State as they rushed to the line, time still ticking away. The Warriors ran a variety of plays to try and score, but eventually turned the ball over on downs that led UMD to victory, 29-23.
The Warriors are currently 2-1 for the season after facing UMD and will travel to Bismarck, North Dakota to take on University of Mary at 2 p.m. on Sept. 25.