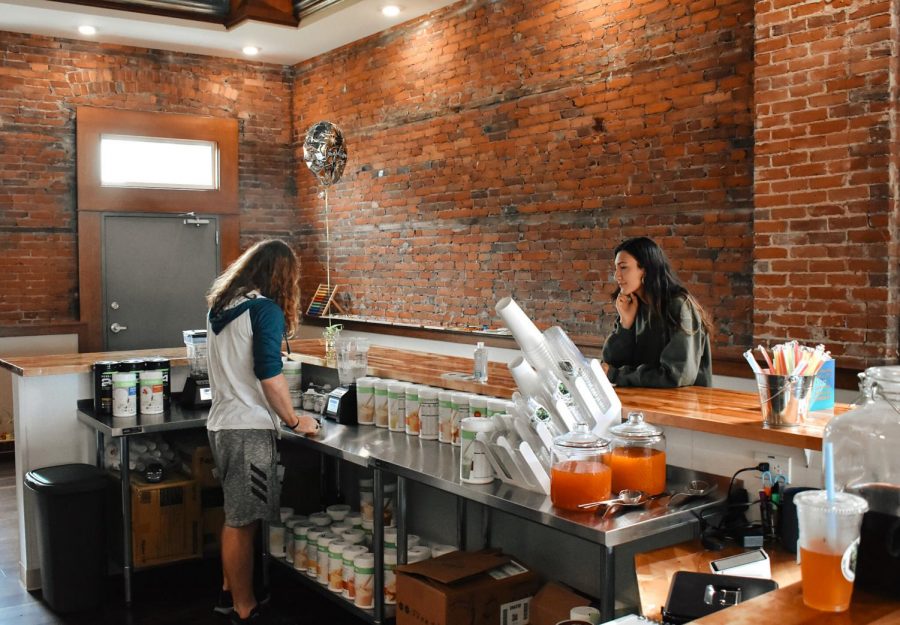 The Lost Oasis café owner Richard Kramer (left) serving a returning customer, Grace Menke (right), a senior at a local high school. The café is just about to celebrate its first month of business since opening on Aug. 28, a congrats-on-opening balloon still hanging on the corner of the drink bar. Kramer plans on hosting community events both in the café and in partnership with WAV Nutrition, a fellow nutrition business, both using Herbalife products in their beverages.

Winona has a brand-new hangout and café in The Lost Oasis, a self-proclaimed nutrition café, which opened just under one month ago on Aug. 28 at 302 Mankato Avenue.
Mainly utilizing social media and word-of-mouth advertising so far, The Lost Oasis has been focusing on community outreach as well to get the word out of their opening. Owner Richard Kramer said his ultimate goal with the café is to give back to the community and help people live a healthier lifestyle.
Kramer has a long-time personal connection and reason behind his own healthy lifestyle and wanting to share that passion with others. Besides studying in culinary school and being a personal trainer with aims of going back to college to become a registered dietician, Kramer’s connection with living a healthy lifestyle goes far deeper.
“I used to be considered disabled. I have 16 medical conditions and I used to take 12+ kinds of medications a day. It used to be if I worked more than four hours a day, I’d have problems,” Kramer said. “I got to a point where I started working on myself.”

Kramer said he researched Herbalife heavily before personally beginning to use their products roughly two years ago. He noted the items from Herbalife are third-party tested and how, especially for those who are just beginning to experiment with ‘lifestyle changes’, the products are “a great opportunity to just make it easier for people.”
WAV Nutrition and Unlimited Nutrition in Winona also utilize Herbalife products; however, Kramer says The Lost Oasis’s current and future community outreach will make it a unique, standout addition to Winona. Kramer has also already worked with WAV Nutrition on several fitness events for the community and plans to continue working with them for community events and promotions.
“We try to not even be competition; we try to help each other and we talk about each of our locations,” Kramer said of his relationship with WAV Nutrition.
Kramer has also previously reached out to local Unlimited Nutrition in hopes of partnering but they declined.
In the café’s first month of business, Kramer has given more than 70 of their Lit Tea drinks to a school near their location as a thank-you to the teachers and employees there on their first day of the school year, he said.
KramerHe also went to the Winona Health E.R. and did a similar thing handing out free drinks, as well as to The Lost Oasis’s neighboring business Pac N Mail Express. Kramerand has already planned to send 24 more drinks to the Kwik Trip location across the street for an all-employee meeting they’re holding.
Although already laying down connections throughout the community while coming up on its first month of business in town, TheLost Oasis almost did not make its home in Winona.
Kramer is from Milwaukee, Wis. and had originally looked around his hometown for a location to open the café since there was “nothing like this” there, he said. Next, he looked around Rochester and found a potential location there. Then, while still scouting locations, he stumbled across a Winona location.
“I stumbled across this location which hit my demographics across the board, so it’s perfect. The building was already suited to what I needed; I just had to build a bar and add everything else I needed in it,” Kramer said.
Running a business is not something new to Kramer, though, as he saw his father open and run his own business detailing cars for more than 25 years. Kramer’s mother, with a background in business management, also opened many restaurants throughout Milwaukee and the United States and worked for Mo’s Irish Pubs in Milwaukee for years. Kramer’s sister, too, has a background in business management and currently is the second head of a food and beverage management corporation for Marcus Theatres.
“I guess entrepreneurship runs in the family,” Kramer said. Even with the help and business knowledge from his family, COVID-19 had an impact on The Lost Oasis’s planning and eventual opening. Kramer said with COVID’s impact on mailing and shipping, Minnesota’s own COVID restrictions on businesses and even being unable to visit potential business spaces in person were all hurdles.
While Kramer had hoped to have The Lost Oasis open months ago, he also said the pandemic allowed him to focus more on research prior to starting the business at all.
“COVID actually helped me get into starting my business as well as delaying it. I’m also a personal trainer and I was laid off at the beginning of COVID, so I was on unemployment, but that gave me an opportunity to put full-time effort into doing this,” Kramer said.
The building the café is housed in has an open floor plan with lots of space to add further furniture and décor into, as well as to host activities and events, which Kramer plans on doing.
Kramer said he is in talks with a local artist to create a mural on one wall of the café and hopes to decorate the space with greenery and more tables and furniture for customers, as well as DIY-ing a few pieces himself.
He built the bar where the drink-making and selling occurs and plans to refinish some old doors to place in the café as decor. Kramer. He also wants to turn the building’s basement space into an area for fitness camps and classes to occur.

“We’re going to have yoga in here once or twice a month eventually [and] I’m planning on plenty of community events,” Kramer said. “I also want to eventually put in a karaoke night, [have community members] do stand-up comedy [and] if a local musician wants to come in and play, any of those are options.”
He also said Chi Alpha, a ministry part of a national organization, may begin holding meetings in the café’s space as well, given their recent departure from Winona State University and no longer being able to hold meetings on its campus.
Kramer already has ideas on how to improve The Lost Oasis, including adding more to their items to its current 20+-item beverage menu, improving recipes and selling reusable straws and tumblers in an effort to be environmentally conscious.
He also hopes to add student promotions in the future, like offering student discounts with student IDs present at purchase, deals on drinks during finals and midterms at the local colleges and more. Kramer continued to emphasize his hopes of the café integrating itself into the Winona community and being able to give back more than anything.
“A lot of people feel and think money makes you happy, but that’s not true,” Kramer said. “It’s the love in your heart and what you do to help other people. I would rather give back to the community and be happy and broke for the rest of my life than to have money.”