THAD Department premieres “All Together Now!” 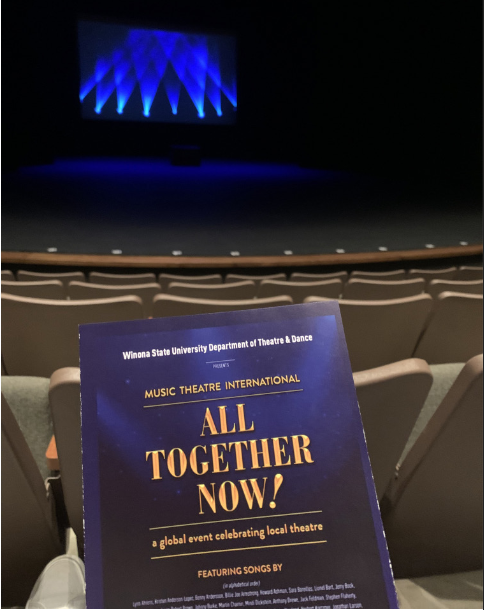 Pictured is the “All Together Now!” THAD show’s playbill. The show premiered this past weekend on Nov. 12, the showing running through the 14th.

The Theatre and Dance Department at Winona State University presented “All Together Now!” last weekend, Nov. 12-14. This was the second theatre performance of the year in the Vivian Fusillo Theatre and the first in-person performance since 2020 for many of the performers.

Music Theatre International (MTI), one of the world’s leading theatrical licensing agencies, designed “All Together Now!” as a fundraiser for theatres to perform live.

“The past year-and-a-half has been extremely challenging for theatrical organizations and MTI is offering this exclusive musical revue as a way to support the thousands of theatres who are persevering under trying circumstances,” the MTI website states.
Over 2,500 organizations performed “All Together Now!” last weekend, from all fifty states and forty different countries.

Hannah Beumer, a third- year, psychology major and theatre minor, described the show as being a “compilation of a bunch of different songs from different musicals, from a bunch of varying time periods.”

“All Together Now!” was directed by Heather Williams- Williams and featured 13 students of different years and majors. Beumer commented on the authenticity of having such an academically diverse cast, stating that the show brought people from many departments together to do what they all love to do. MTI provided 30 songs for theatres to choose from to create a 15 song performance, according to Beumer. The contrasting Broadway pieces in Winona State’s rendition of “All Together Now!” created an engaging performance for the audience with contrasting energies and emotions.

With ballads from various musicals ranging from “Les Miserables” to “Waitress”, the audience was found laughing at one performance and sniffling at the next.

The production began with “Pure Imagination” from “Charlie and the Chocolate Factory”, opening with a curious and exciting atmosphere.14 songs later, all 13 actors came together in the concluding performance, “Seasons of Love” from the musical “Rent”, leaving the audience singing on their way out of the theatre.

Many of the actors in the show expressed their gratitude for the opportunity of a live performance of “All Together Now!” With some of their last in person performances having been in 2019, a live audience is very exciting.

Nick Tentis, a third-year student studying communications, art and literature teaching, had his last live performance when he was in highschool. Tentis spoke of his excitement regarding in person performances for this show.

“It is fun to kind of bounce off of the audience’s energy and I think it’s a lot easier to have chemistry with your castmates when you can see their face and they are also living off the energy,” Tentis said.

Because the entire cast was vaccinated, Beumer stated that the cast was able to perform without masks. Not having to wear masks, along with a live audience, created a very normal theatre experience compared to the last couple years.

“It’s just really nice that we’ve gotten to a point in the pandemic that we can kind of work towards, not normal, but back to something better than streaming,” Beumer said.

Katelyn Kelley, a first-year elementary education major, echoed this sentiment by commenting on the atmosphere of the cast of “All Together Now!”

“It is so nice [to be in person] because you can hug and touch and sing in each other’s faces. It’s so nice to be around people and not be isolated and create art with people,” Kelley stated.

An in-person performance does not just impact the performers; behind stage, technicians and stage managers help create the magic that is seen on stage during a show. Riker Weiler, one of the stage managers for “All Together Now!” worked backstage to make sure prop tables were set up correctly, performers were prepared and making sure the show ran smoothly.

Weiler commented on “All Together Now!” and the fact that there were thousands of organizations around the world performing similar shows for the same purpose. “I think that’s what’s really interesting about that; I also have people that I know personally who are doing

‘All Together Now!’ as well in their own community theaters,” Weiler said. “So I think it’s just cool to have that connection and be able to say that we did this all at once in this essentially once in a lifetime kind of thing.”

Kelley also expressed her excitement knowing that all 50 states and 40 other countries are performing their own renditions of the show.

“I feel like even if we are far away [from each other], we’re also connected by the content that we’re all making,” Kelley said.

“All Together Now!”, acting as a fundraiser for theatres, provided an opportunity to raise money to put towards future performances. Tentis encouraged people to come to Winona State University’s future Theatre and Dance performances in the spring.

“One important thing that does separate this show is that it’s contracted through MTI for free so that we
can fundraise money for upcoming musicals,” Tentis said. “So [coming to] see the show supports the next show, ‘Cabaret’ in the spring.”