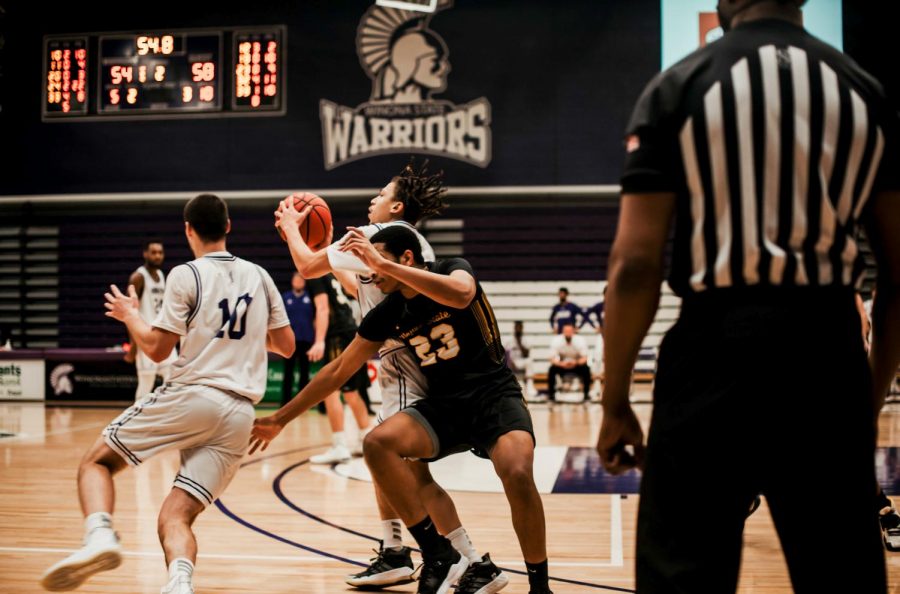 The team’s first game against Pittsburg State Friday, Nov. 12 ended in a win, 79-68. Winona State also managed to get their second win and, overall, had a successful weekend at the Central Region Challenge.

Unlike last year, COVID-19 restrictions lightened the load on players and coaches.

Assistant Head Coach Zach Malvik explains the biggest impact is of having less restrictions is more time to prepare for games.

“I think the biggest thing this year is that we’ve just had more time in the gym together as a team and have had a chance to build a better foundation for how we want to play,” Malvik said.

Winona State’s first game pitted them against Pittsburg State this past Friday, Nov. 12 and celebrated the first win, 79-68.

Alec Rosner, fourth-year guard, led Winona State with a career high of 28 points along with six rebounds and two assists.

Despite only winning by 11 points, Winona State’s largest lead was 27 points with 14 minutes left in the second half with the score at 61 – 34.

The Warriors defense disciplined their opponent, only Pittsburg State to shoot 23% (6-26 FG) from the field.

Winona State will have to clean up on the fouls, committing 19 personal fouls allowing Pittsburg State to attempt 26 free throws with them making 20. This compared to Winona State going 5 for 11 from the free throw line.

The next day, Winona State battled Henderson State University, rewarded with another win, 79-62.

Drew and Martens both grabbing 6 boards with Whitelow and Drew dishing out 3 assists each.

Winona State, again, shooting remarkable from the field with a 53.1% field goal percentage shooting 18 for 28 and shooting 38.5% from three-point territory going 10 for 36.

Whitelow was called for a technical foul along with Andre Washington, third-year forward, from Henderson State with roughly 3 minutes left in the game.

Winona State grabs their second win and, overall, had a successful weekend at the Central Region Challenge.

The team, understandably, is exhausted after back-to-back games, but the victory this weekend keeps their spirits up.

“Back-to-back games are always tough, but that’s part of playing in this league,” Malvik said. “It takes great preparation, recovery and really being locked in each night.”

This is a great start to the season for Winona State, and the team hopes to continue this streak.

“I thought the guys played really well for the opening weekend,” Malvik said. “They really competed and played with great energy and effort on both ends of the floor.”

Winona State improves their record to 2-0. The Warriors will battle against Viterbo University on Nov. 17 at 7 p.m. for their home opener.