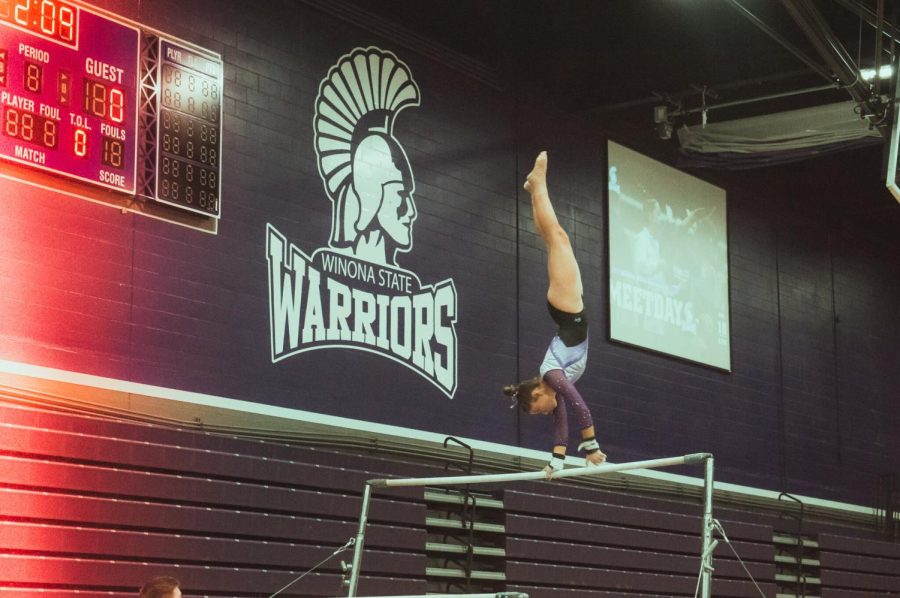 Gymnastics finished up their home schedule with a meet against University of Wisconsin-Oshkosh last Thursday, Feb. 10. The Warriors fell to the UW-Oshkosh Titans by 8.475 points with a final score of 181.900 compared to the Titans’ 190.375.

Winona State University Gymnastics finished up their home schedule with a meet against University of Wisconsin-Oshkosh last Thursday, Feb. 10.

Winona State claimed the top two places all around with first year Bryce Stoltz earning champion honors with a 36.950, a 1.575 increase from the team’s meet against Gustavus Adolphus College on Friday, Feb. 5. This marked her second straight all-around championship performance.

Also earning a spot on the podium was fourth year Kaitlyn West with an all-around 36.150.

On bars, the top finishers for Winona State were third year Breanna Ho with a 9.150 followed by Stoltz with a 9.050. The winner of the event was Emily Buffington from UW-Oshkosh with a 9.650.

The champion on the beam was Emily Buffington from the Titans with a score of 9.650 with the top finishers for the Warriors being West, Stoltz and Taryn Sellner with a 9.400, 9.375 and 9.700 respectively.

“Individually, I am hoping to fully hit my beam routine,” fourth-year gymnast Gabby Johnson said of her goals for this year.

The meet before the Feb. 10 matchup against UW-Oshkosh, Johnson tied for second on beam.

“It wasn’t my best performance,” Johnson said. “But it was very rewarding to see that I could still place even if I wobbled on a skill that I am normally pretty solid in.”

Johnson went into the UW-Oshkosh meet confident, but unfortunately did not place.

During floor routine, Izzy Kropiwiec earned second place for the highest individual event finish for the Warriors with a 9.500 followed by Camdyn McSweeney and West with a 9.300 and 9.250.

On the vault, Stoltz, Ho and West earned the top three scores for the Warriors with Stoltz and Ho tied at 9.350 with West shortly behind at a 9.200. In fourth was Katie Curtis at 9.100. Winning the whole event was UW-Oshkosh’s Buffington with a 9.600.