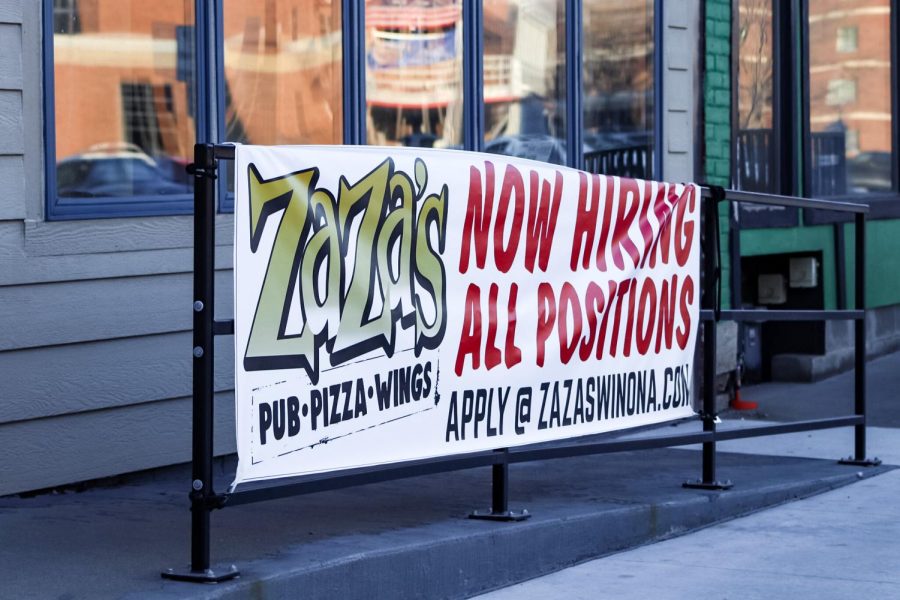 ZaZa’s is nearing the end of their renovation and has advertised looking to hire a full staff. It’s located right across from Sheehan Hall on Winona State University’s Main Campus.

Following the fire that led to its closure in August 2020, ZaZa’s ownership has changed hands and been remodeled. This past September, John Sinniger, the new owner of ZaZa’s, planned for the reopening to occur near the end of 2021 or in January of the new year, but a hold-up on order shipments pushed the reopening date back.

“Honestly the hold up right now is the tables. The tables have been pushed back a couple times,” Sinniger said.

Other items like “a couple coolers” are also being waited on still, he said.

Sinniger also said that after posting “Now hiring” signs outside of ZaZa’s, they received 30 applications in just 30 hours.

“We expect to create a team of workers in the next couple of weeks,” Sinniger said.

Sinniger said that pizzas at ZaZa’s will be market price and explained he has remodeled the interior to be similar to the “old” ZaZa’s, as not to take away from the local favorite’s atmosphere.

Madeline Avila, a first-year communication arts literature teaching major, said she is open to trying the “new” ZaZa’s at least once.

“I’ll probably go there at least once with my roommates. As a student in college, I don’t expect much from a pizza place, but cheap and good pizza,” Avila said.

For first- and second-year students at Winona State, this will likely be the first time they will be able to experience ZaZa’s.

However, for students who were frequent ZaZa’s customers in the past, its return has been much anticipated.

“I’m so excited that it’s finally opening again,” fourth-year nursing student Diana Z. said. “Za’s has always been a fun place to go to with friends. The food and atmosphere is always a 10 and some of my favorite college memories are from late night walks to Za’s with friends.”

Sinniger said the next big project the restaurant team will be working on is an outdoor patio to accompany the newly remodeled interior.

Sinniger explained wanting to put his own spin on the “new” ZaZa’s.

“I wanted to create a gathering space that was unique to Winona. We have 13 flat-screen TVs; it might even be the only place in Winona that has this space to do that,” Sinniger said.

Sinniger noted that a main part of ZaZa’s that students and locals will likely be excited about is the return of memorabilia adorning the restaurant’s walls. There are signed sports posters, cards, t-shirts and everything memorabilia-related on the walls, featuring various teams and players.

Sinniger said he does not want to change the entire vibe of ZaZa’s, especially since it has been an area staple for years. He said he aims to keep the same menu items as were available prior to its temporary closure, so familiar favorites will be available for returning customers.

Sinniger also apologized for the obstacles he said were out of his control that have led to a later open- ing date than originally expected.

“We appreciate that people are being patient and we hear the buzz around the opening. We just preferred quality over quantity when we open,” Sinniger said. “When we open, you will see why we have waited this long and see that it was worth it.”

The soon-to-open eatery also has a new website where applications can be turned in at zazaswinona.com.