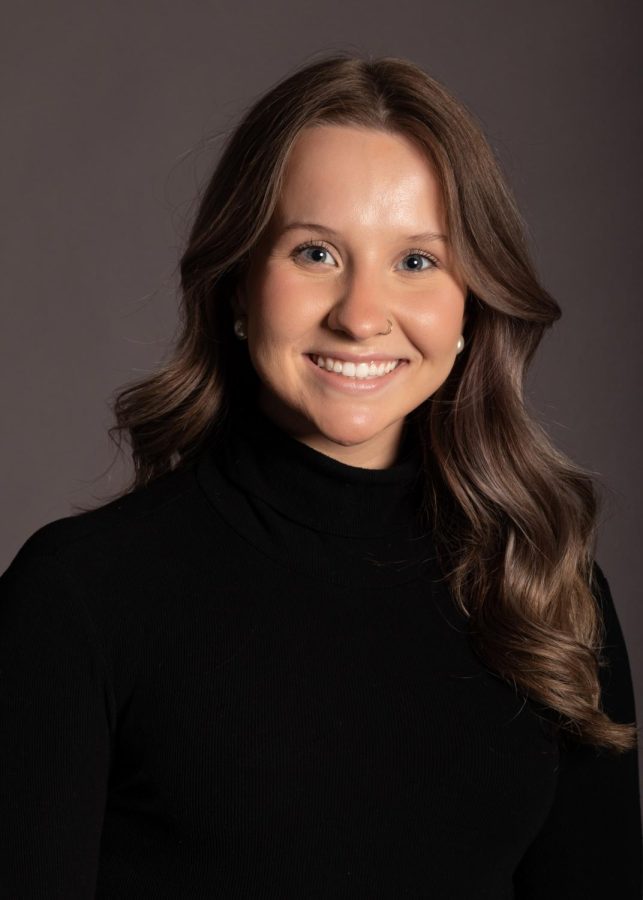 “If you would have asked me sophomore year, I was just running around like crazy, stressed out,” Mercier shared, lightheartedly.

Mercier, originally from Duluth, Minn., has had an objectively impressive and accomplished collegiate career at Winona State University–but she almost was not a Winona State Warrior.

Back in her hometown Mercier attended Proctor Senior High, which is where she first heard of Winona State. As a freshman in high school, she had close friends who were upperclassmen preparing to go off to college, some of whom were considering Winona State. While those friends did not end up choosing Winona State, the river city surrounded by bluffs, perched long the Mississippi River, made the decision to enroll at Winona State all too easy for Mercier.

“I like big cities so I wanted to end up somewhere big, but when I came to campus for a cheer camp, I fell in love with how pretty Winona is,” she said.

Having served as a member of Student Senate for nearly her entire collegiate journey, it is not surprising Mercier’s knack for civic duty started before she ever visited Winona. She was very involved on dance teams and as a cheerleader in high school as well as working on the yearbook committee and with Special Olympics. However, she took a pause her freshman year of college, using her first semester as an adjustment period for life away from her hometown.

“I wasn’t super active in the first couple of months here at Winona which is very weird to think about,” Mercier said. “Honestly, I found myself being super passionate about women’s rights. I left high school from a small town and I was seeing a lot of things I thought were super unfair.”

After her newfound passion in politics was ignited, it was an evident choice to major in political science at the start of her four years at Winona State. Now, near the end of Mercier’s time as a Warrior, she has leaned into her second major: public relations.

Mercier described having envisioned working political campaigns as a perfect merging of her two majors, but as the incoming May graduation date inches closer and closer, she is unsure what her concrete plans are after graduating.

“You see these college kids who you feel have their life together, but as you get older, you realize seniors don’t have their lives together either–that’s just us trying to seem competent.”

Humbly, Mercier credited those she has previously worked with during her time in college with guiding her in the direction to get to where she is now, including peers like former Student Senate President Clara Kuerschner and Vice President Jake Hansen, and prior to them, former President Ben Ellgen. She also credited previous Assistant Director of Student Life, Lindsay Marosi-Kramer, with building up her leadership skills.

“[Marosi-Kramer] was never my advisor but she really taught me a lot about being a leader and being a competent leader,” Mercier said.

“Professor Alzate [is] amazing. I had to take one of her courses every single semester just because I genuinely like how she teaches and back when I had a fellowship, she was really helpful for finding a mentor and things like that,” Mercier said.

Further, Mercier said her close-knit friend group at Winona State has grounded her throughout her time in college.

“I have the greatest group of friends here,” Mercier said. “I am constantly with my friends who are also extremely busy too and are seniors in college, just absolutely killing it.”

Outside of her senate duties and classwork, she joked she was “pretty boring,” divulging in Netflix and television when she has the chance. Staple favorites for her include Shonda Rhimes’s award-winning drama “Scandal” and the classic series “Gilmore Girls” as well as her varied taste in music from Taylor Swift to Fleetwood Mac, to Kid Cudi. As a newly turned 22-year-old, Mercier also shared she and her friends enjoy spending time in downtown Winona’s nightlife, which has played a role in dictating one of her final campaigns in senate.

Having already completed two of the three major goals she set for her tenure as Student Senate President–implementing all-gender bathrooms on campus and launching a vaccine incentive campaign–the third is planned to move into motion soon.

“Back in the summer, I had this idea of a ‘Get Home Safe’ campaign. I’m a student that goes to the bars as I’m 22 now and I just wanted students to feel safe in their college town if they partake in extracurricular activities off campus,” she said. “That campaign will be launched in April, which is also Sexual Assault Awareness Month.”

Although Mercier said she has been consistently proud of the work done throughout her time in Student Senate, one of the things she is most proud of is not one of her own initiatives, but that of her senate peers.

“I think the thing I’m most excited for is the student minimum wage motion resolution that [Student Senate] just brought and passed. We requested that minimum wage should be increased to $13 an hour for students,” Mercier said. “I don’t think $10.33 is a livable wage for anyone, but especially students who are paying thousands of dollars to get an education.”

She explained the resolution was written by senate’s Academic Affairs committee and she was simply “excited to help assist them and really advocate for students.”

Mercier’s legacy at Winona State will no doubt be one to remember, but for her, she hopes she has done enough to have made students “feel heard” at Winona State.

“I think I just want students to know that they have a bigger voice than they really believe and that [college] goes by so quick. It feels so gross saying that, but college does go by quick, so take advantage of it in every possible way,” Mercier said. “But also, be excited for your future, because your life is not over at the age of 22–you have so much more to look forward to.”