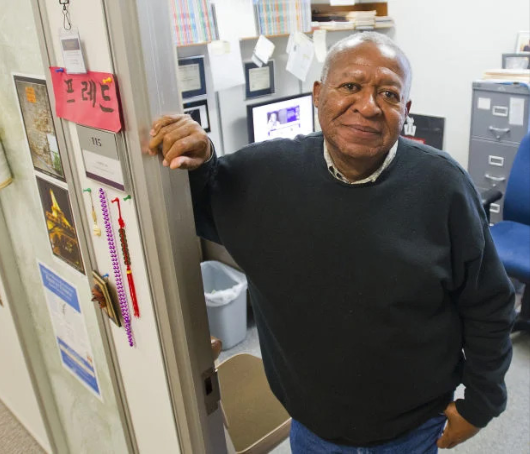 Photo taken by Andrew Link for the Winona Daily News.

Political Science and Public Administration professor, Dr. Fredrick Lee, has been teaching at Winona State University for three decades, with his time teaching coming to a close.

Lee’s teaching career began right after he completed graduate school, making his teaching career more than 40 years long. At Winona State, Lee has more than left his mark, having held several positions including chairperson of the department, winning three Professor of the Year awards and is also credited for his role in starting the university’s Ethnic Studies program.

Lee has been an instructor for several institutions alongside Winona State, including Yale and Berkeley Universities. However, Lee said his favorite he has taught at would have to have been University of North Carolina-Chapel Hill.

“If I’m smart, I’ll say Winona… but I ain’t smart,” Lee said humorously. “Each school has it’s on virtues, but I guess I would have to say University of North Carolina-Chapel Hill [was my favorite to teach at]. The reason is that there are more students who are passion- ate at a graduate level school rather than a public school,” Lee said.

Lee is known well among students at Winona State for his candor and humorous personality. He explained saying potentially contentious things while teaching, such as mentioning political figures like Donald Trump, does not bother him at all and is actually easy for him, he said.

“I say to students that they do not have to agree with me and probably, most don’t,” Lee said.

Lee said he simply wants students to be able to think for themselves and hopes those who have taken courses with him feel he has helped them do just that. He described how most people just listen to their parents’ and families’ ideologies when it comes to politics, and do not think for themselves until they reach college-age.

His teaching style is not only marked by his personality, but also his take on tests–Lee does not require tests in his courses, but instead gives short essay assignments.

Lee’s experience as a Black professor has certainly tied into and affected his decades-long teaching career, he shared.

“As I have gotten older, it has become less of an issue. It’s not that the students have gotten any less racist, or that the community is any better, but I have become more at peace with it,” Lee shared. “But that is on a personal level; at an institutional level I expect the college to have my back.”

Lee connected that sentiment back to when he worked at North Carolina-Chapel Hill.

“You know how the south is… That’s why I don’t live there. But I have had to learn, at what point do I engage and when do I need to move on,” Lee explained.

“He is incredibly smart and gives great life and teaching advice. He always has a smile and instantly can cheer you up,” Guernica said. “He is truly a nice person who will always go the extra mile to help someone out, especially students, and his sense of humor is refreshing.”

Guernica noted how humorous Lee can be while teaching as well. “For many years now, Dr. Lee has been starting his first class by telling students how difficult his courses are and how he has very high standards. [Lee] acts like he is some draconian disciplinarian but in actuality he is super approachable and generous,” Guernica said.

Guernica too explained how, especially in their department but also throughout the university, Lee has played an incredibly vital role.

“Spoiler alert: he is going to retire in a few years, and that is going to really be hard on us,” Guernica said. “Someone, or more than one, is going to need to step up and fill all those university committees he also serves on.”

Lee shared he plans on retiring at the end of the 2022-23 school year or soon after.