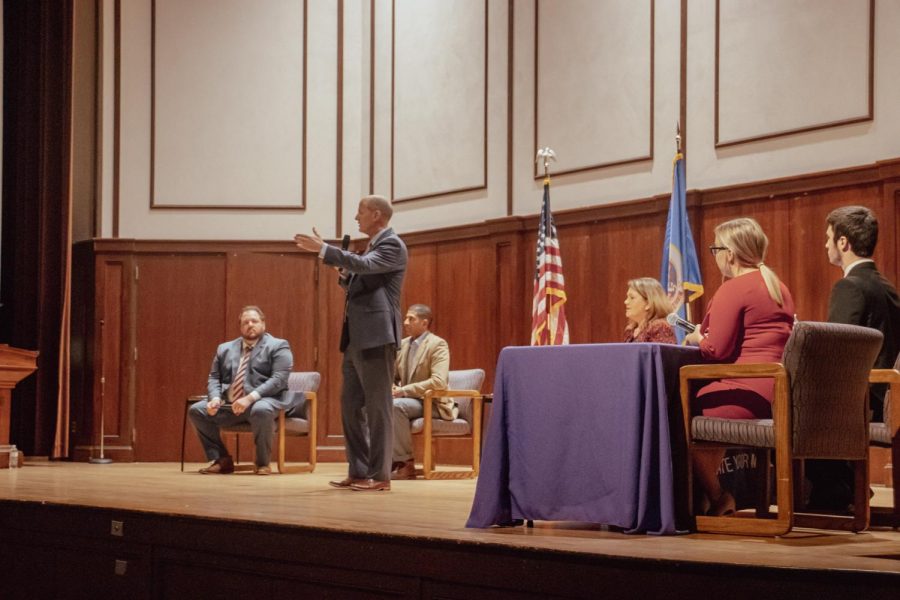 The Minnesota Republican Governor Candidates Debate was hosted on April 13, 2022 at 7 p.m. in Winona State University’s Harriet Johnson Auditorium. Four of the seven candidates participated in the debate by outlining their campaign and future policies.

Three students from the College Republican Club helped run the event. Jason Hoeft, club co-president and Emma Gervais, club board member, both moderated the event. Madeline Hoppenrath, the other co-president of the club, also helped by introducing and closing the event.

The Minnesota governor candidates present at the event were Paul Gazelka, Mike Murphy, Michelle Benson and Neil Shah. Each presented their views, talking points and how they would serve Minnesota, should they be elected as governor.

At the event, brochures were provided to audience members describing the key points to what each candidate promised to do if they are elected governor.

Mike Murphy, who was born in Coon Rapids, Minn., said his main goals as governor would be to ban critical race theory, bring back election integrity, support second amendment rights, support our law enforcement and help business and job growth.

“Growing up in Coon Rapids, Mike Murphy is a lifelong resident of Minnesota. He was hunting and fishing from an early age, spending much of his free time exploring nature with his friends. He graduated from Coon Rapids High School in 2003 and enrolled in college, studying Law Enforcement,” Murphy’s official website states.

During the debate Murphy explained how he would help business and job growth.

“It’s time for Minnesota to have strong leadership, and a plan to move forward from the economic impact of the pandemic. As governor I plan to super charge our economy by gutting taxes and cutting reams of red tape. I will make sure any Minnesotan with a dream can achieve it if they work hard enough,” Murphy said.

Paul Gazelka, who traveled in many parts of Minnesota in his childhood, had his focus on increasing public safety, stopping over-taxation, protecting the education system, defending the second amendment and fighting against abortion.

“I have had the privilege of living in many parts of Minnesota. I was born in St. Paul and grew
up on the Iron Range. I graduated from Roosevelt High School in Virginia, Minnesota, and then I went to the University of Minnesota, Duluth, for the first two years of my degree. I finished my business degree at Oral Roberts University in Oklahoma,” Gazelka states on his official website.

In Gazelka’s speech, he talked about how important it is for children to love the country they are born in, specifically children in the United States.

“Critical race theory is racism. We should never be put in a spot where children do not believe that the United States is not the best country in the world,” Gazelka said.

Michelle Benson, who grew up in Murdock, Minn., promised she will protect Minnesotans’ rights and freedoms, keep communities safe, lower taxes and require regulatory humility and create excellence and transparency in public education.

“Michelle was raised on a fam- ily farm in the western Minnesota community of Murdock where her family still farms today. Growing up she learned the value of hard work and personal responsibility. Her work ethic and determined attitude led her to graduate with a B.A. in chemistry from St. Catherine University in Saint Paul and later with an M.B.A from the University of St. Thomas,” Benson shared on her website.

Benson explained her viewpoint on the Second Amendment during the debate.

“Every Minnesotan has a fundamental right to protect themselves. We must never waver on defending our Second Amendment rights. Gun control laws punish law-abiding gun owners while doing nothing to keep people safe,” Benson said.

Neil Shah, an immigrant who has made his home in Minnesota, claimed when he is governor, he will increase public safety, stop over-taxation, protect the education system, defend the Second Amendment and fight against abortion.

“My parents came to America fifty years ago for their shot at the American Dream. They arrived poor, and they looked different, but they worked hard. America judged them by their hard work, talent and the content of their character – not the color of their skin. Like millions of immigrants before them, and since, they succeeded,” Shah states on his website.

Shah also explained how Minnesota has been failed by Democrats in his eyes, honing in on law enforcement as an example.

“Every single day, law enforcement officers across Minnesota risk their lives to keep our communities safe. How are they treated in return by our current governor and his extremist allies? They’re belittled and even attacked while their departments are defunded by the radical left,” Shah said.

Shah continued, describing how he would tackle the topic if he was elected as governor.

“Working with leaders in the law enforcement community, our team is crafting plans and policies that will lead to safer, more effective policing and reduced crime across Minnesota. As your governor, I will put those plans into action to make Minnesota safe and secure again,” Shah said.

The Winona State College Republican Club collectively made comments that explained why they wanted to host the debate and how it was of educational benefit to students on campus.

“We want to inform students of the importance of midterm elections and local government. We also want to expose students to opposing viewpoints to encourage civil discussions about important current issues in Minnesota. We encourage students of all political affiliations join us for this debate, as it is a great way to be informed of current issues in state government,” the College Republican Club said.

The club also talked about the various factors they considered when deciding which candidates to invite to campus.

“Candidate’s personal ideologies and decisions on public policy are key things to look for, as well as their experience and past careers. A debate is a great way for individuals to get answers to these questions and become educated voters,” the club said.

The College Republican Club also explained how the event was meant to be inclusive, stating that anyone can attend their events to learn more about the club’s beliefs, opposing beliefs and about politics in general.