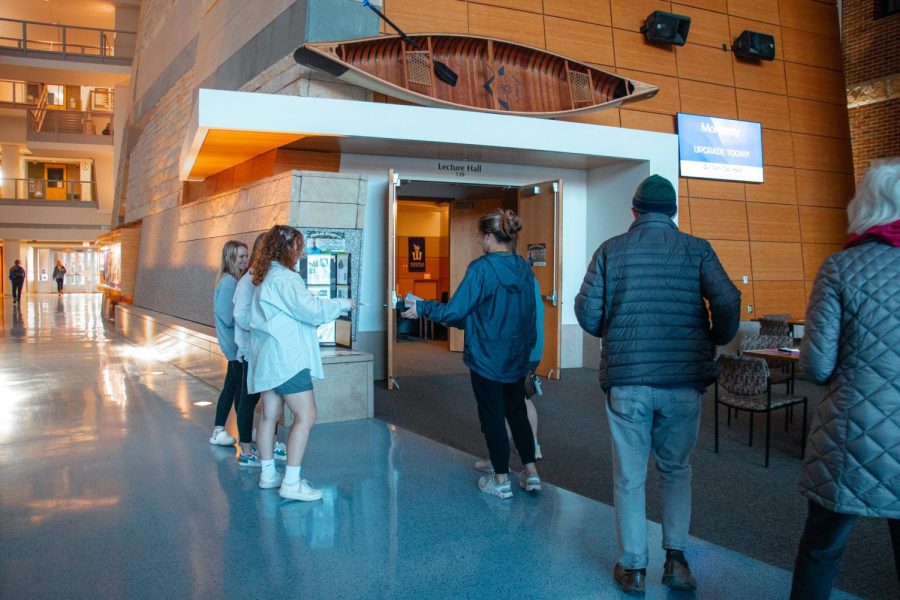 A constant stream of spectators flooded into Lecture Hall 120 of the SLC. Many showed up in hopes of receiving a sapling before the event, but were let down due to the cold temperatures up north freezing them.

On Thursday night, April 21, Winona State University students, faculty and staff as well as local community members joined together in the Science Laboratory Center to listen to conservation biologist Curt Meine talk about what the driftless region could teach people about the current climate of the world.

The topic of Meine’s speech centered on how people may feel “disoriented” with the current world’s state as we continue to move through COVID-19. Meine commented that we live in a time of many crises regarding health, the environment, politics, diversity and more. He also said he believes the driftless region can teach people a lesson about what humans can do to try and “reorient” themselves in uncertain times.

The driftless area is comprised of parts of Western Wisconsin, Southeastern Minnesota, Northeastern Iowa and Northwestern Illinois, all which remained untouched by the drifting of glaciers millions of years ago. Meine said this area serves as a reminder for people that Earth is ancient and withstanding.

While this region was untouched by the glacial drift, it is still constantly changing, Meine said. He went on to state that as the land changes, so too do human communities. The land has a history of change, such as our human communities coming together to make the change we want to see, such as with the watershed projects in Wisconsin to repair land damaged by storms. Meine also brought up how the land has a tragic history too, such as the displacement of native tribes from their lands.

The last point Meine delivered to those in attendance was encouraging people to stop looking for leadership and instead become the leader. He said if people want to see leadership in the community, then it is up to them to stand up and take initiative.

Meine’s overarching effort, was to teach and remind attendees they can be part of the solution. He noted if people want to create change in the world and preserve the land, then everyone must come together to do so.