‘reasons to be pretty’ opens this week 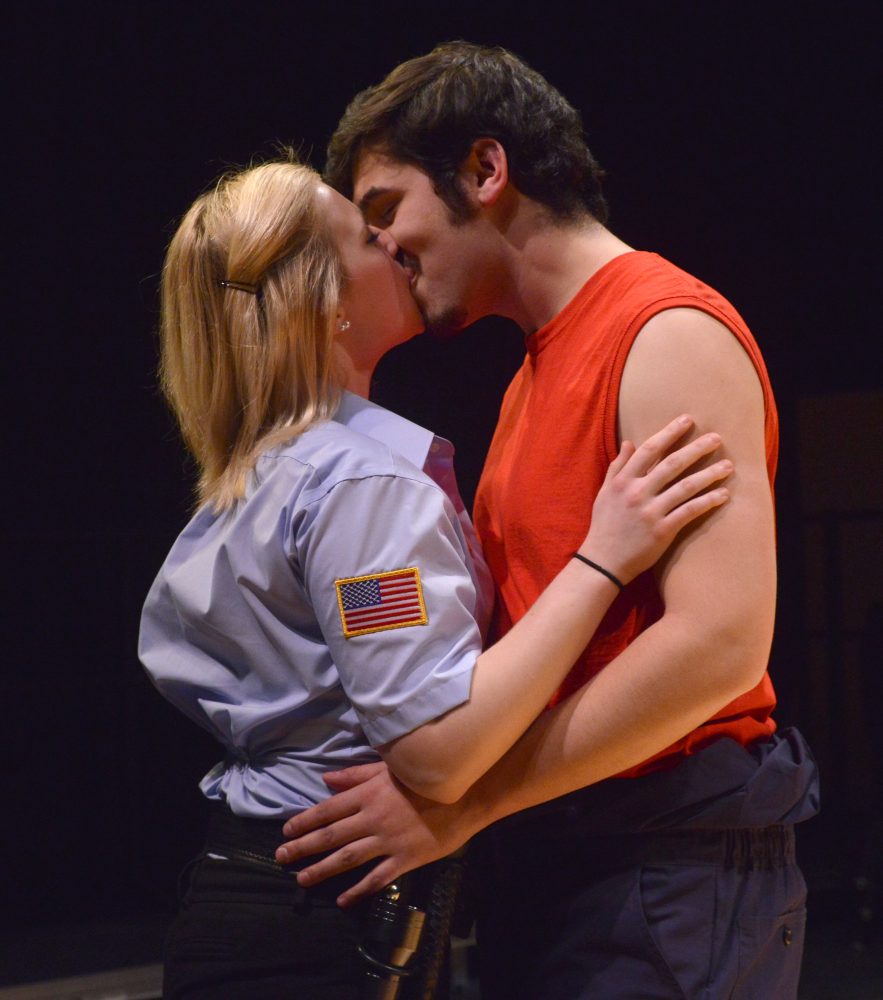 (Left to right) Bri Dankers and Andy Sroka shared a kiss during the first act of Reasons to be Pretty. Brad Farrell/Winonan

Four senior students in the Winona State University department of theatre and dance are preparing to perform “reasons to be pretty” as their senior capstone project this week Thursday through Saturday.

The play, directed by theatre professor Jim Williams, deals with the question of external beauty.

The story revolves around two couples: dating couple Greg and Steph and their married friends Kent and Carly. Greg and Kent are best friends, as are Steph and Carly.

Each character has his or her own reasons for wanting to feel pretty.

The play is primarily character-driven rather than plot-based. The characters are members of the blue-collar society who find themselves in an argument that could jeopardize both relationships.

Bri Dankers, who plays Carly, said, “Everyone will be able to relate to this show.” Her character’s husband Kent is played by Andy Sroka.

The play was written by Neil LaBute, a recent playwright whose plays first debuted in 1989. It is part of a trilogy including “The Shape of Things” and “Fat Pig.”

In each of these plays, LaBute writes about how men are misogynistic and despicable in nature.

Greg is the only one of LaBute’s male characters who grows up.

Andy Halvorsen, who plays Greg in the show, noted that the play relates nicely to this year’s Common Book, “Guyland,” written by Michael Kimmel, which describes boys’ path to manhood. Halvorsen said his character realizes that he wants to change.

A sequel to “reasons to be pretty” called “Reasons to Be Happy” will debut off-Broadway this summer. The sequel takes place three years after the events of the first play.

Daun first proposed to add “reasons to be pretty” to the list of options for senior capstone performances in the spring of 2012. She and the other three actors first read through the play in November and began rehearsals in January.

Rehearsals are a challenge because the actors must share the space with theatre classes and other projects. While preparing for the play, the actors have had to internalize the mindsets of their characters, which are at times much different than their own personalities.

“Nothing is sugar-coated,” said Daun. The play involves a lot of fighting and swearing, and nothing is censored, she said.

The production will be performed in the round. The stage is a painted square in the middle of the room, surrounded on all sides by seating.

“Relationships are like a boxing match, so this is kind of our boxing ring,” Dankers said.

“reasons to be pretty” features a minimal set design, including just a water cooler and some tables and chairs. The play is set in a small town similar to Winona, and each scene takes place in a different location within the town. These places include the characters’ homes, their workplaces, a ball field and a restaurant. Both the setting of the play and the nature of the conflicts are meant to be familiar for the audience members.

The show will be performed in the Dorothy B. Magnus Black Box Theater at 7:30 p.m. from March 7 to March 9. Tickets are $5 for the public and free with for students with a student ID.