Back from the dead: ‘Marx in Soho’ comes to Winona State 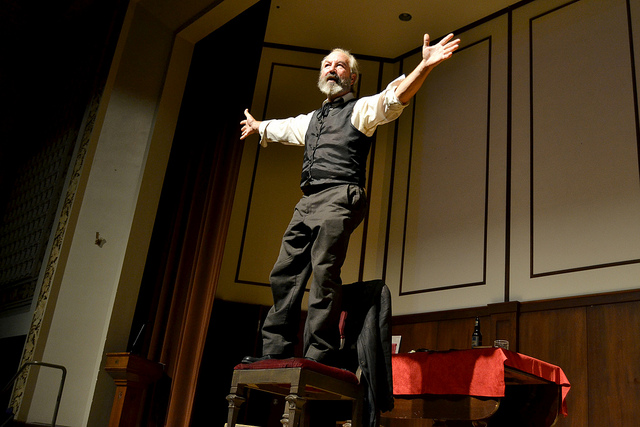 Karl Marx came back to life on Monday, Sept. 30, in the Harriet Johnson Auditorium, as the sociology and history departments welcomed Bob Weick to the stage to perform the one-man play, “Marx in Soho” by Howard Zinn.

In the play, Marx returns to his home in Soho, Germany to re-explain his ideals to society. He has come back because he is annoyed with the claims that his ideas are dead.

“I knew next to nothing about Karl Marx when I began this project,” Weick said. “All I knew, or thought I knew, was that he was a bad guy. Now I know better. And through my journey with this play, I do see the world differently.”

Weick, 58, is a graduate of Lehigh University and has been acting for 15 years. Before his acting career, Weick was a farrier, cleaning, trimming and caring for horse hooves for 35 years. This performance was the 244th in his acting career.

Throughout the play, Marx explains to the audience what he really meant when he came up with his ideas. He repeats a phrase throughout the play: “I am not a Marxist.”  He says this because he claims Marx’s ideas have become twisted into a bad concept.

So, when choosing a play to perform, why would Weick choose such a controversial man to portray?

“I wanted to use my talent as an actor to contribute to meaningful dialogue about the major issues of the world and our society,” Weick said. “I want to encourage young people to be more than consumers, to be active citizens. Whether we like it or not, we are all involved in politics. We all have political power.”

Craig Upright, a visiting assistant professor in the sociology department at Winona State University, is the main person involved in bringing this play to Winona. Upright first saw the play at a sociology conference, where the performance was the keynote speaker.

The sociology department was very excited about the opportunity this play brought to students.

“A lot of students do not get the chance to read any original readings by Marx,” Upright said. “And what they get in their classrooms isn’t enough to give them the full picture. This is a wonderful play that helps people to understand what Marx was trying to accomplish and get a little feel for him as well.”

There was a lot involved in getting a traveling play to stop here at Winona State.

“We had to figure out how we were going to pay for him to come,” Upright said.

“The department of history helped pay as well. Then it’s how is he going to get here, where he’s going to stay, when are we going to find time for him to eat, et cetera,” Upright said.

All the hard work, however, was worth it, as the crowd at this performance was one of the best Weick had seen in years.

“My performance at Winona was a memorable one, perhaps the largest college audience to ever see the play,” Weick said. “The energy coming from those is attendance was palpable. The response and reaction was quite satisfying … I can’t thank Craig Upright enough for arranging to bring me to campus,” Weick said.

“It was wonderful to see the turnout and support for this kind of performance,” Upright said. “I think that Winona State is perhaps unique in its support of the performing arts.”

Weick said he hoped the message of the play came through.

“The great question going forward is can we come together in common sense and move from this competitive, destructive, violent, growth-based economic model to a cooperative, sustainable system,” he said. “One that values people more than profits.”