Black Katts gear up for Sweet 16 with 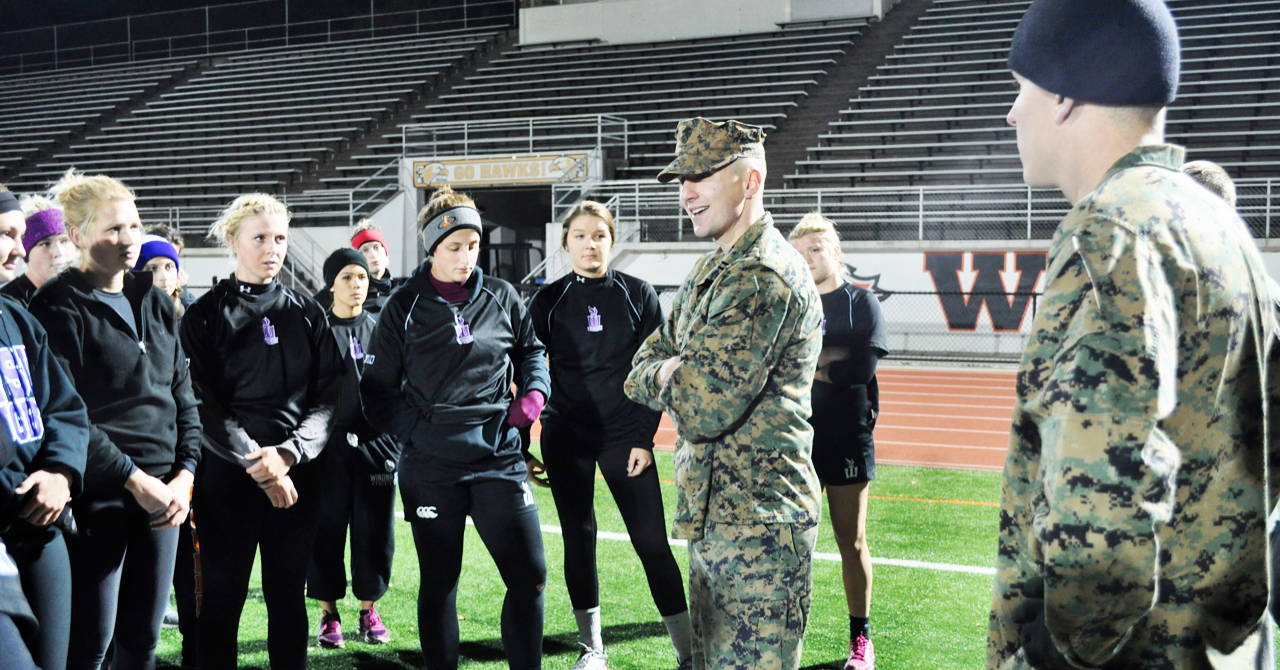 The Winona State University women’s rugby team, the Black Katts, endured a tough week of practice and put forth hours of hard work in preparation for the Round of 32 game on Saturday against the University of Wisconsin-Whitewater.

Head coach Joshua Krzewinski said as a coach he has to keep things fresh or he runs the risk of burning the players out. That, combined with his belief that rugby should provide the girls with experiences and memories they can carry with them forever, influenced Krzewinkski to connect with the Marine Corp who offered training to the Black Katts earlier this year.

“Teamwork is essential, so this was a perfect time for the Marines to come in and put us to the test as well as teach us life lessons about teamwork,” Krzewinski said. “I felt like it would be a unique team building experience but also some fun mixed in with fitness work.”

Krzewinski told the girls on Thursday there would be a “guest” coming to practice. He said when they arrived, they were greeted by three Marines and a maze of cones for the maneuver course.

The fitness test included an 880-meter sprint, a two-minute interval of overhead pressing a 35-pound ammunition box, carrying 70 pounds of ammo boxes, carrying and dragging a teammate more than 50 yards, a grenade throw and a 400-yard maneuver course which consisted of sprints, pushups and military crawl.

Senior Madison Skalecki said Thursday’s training was a great opportunity for the team.

“You had to have the mental toughness over everything,” Skalecki said. “What I got out of the practice was that the minute you tell yourself you can’t do something or you doubt yourself is the minute you lost or failed. If you keep a positive and motivated attitude, you can push yourself farther.”

Krzewinski said, “The girls learned that the body can do much more than we give it credit for, and they pushed themselves hard through the session.”

Krzewinski said the Black Katts will be having controlled scrimmages with the men’s rugby team during the remainder of the season to “get the girls to step up their focus and intensity and make us play at a much quicker pace.”

Going into the Round of 32, senior co-caption Kourtney Kavajecz said she felt the Black Katts “should be able to demolish UW-Whitewater,” a team ranked No. 2 in the Great Waters Conference.

A day before the first playoff game, UW-Whitewater forfeited the match due to injuries.

Krzewinski said their opponent thought they would be able to rehab team injuries through the week and be ready to play by Saturday.

He said the forfeit is “tough to swallow” and the Black Katts will now go into the Sweet 16 game having last played on Oct. 25.

“It’s frustrating that we had recruits, alumni, family and other university administrators coming to the match and had to cancel on them,” Krzewinski said. “The seniors didn’t get to celebrate their last home game, and it is also embarrassing that this happened in the national playoff.”

Regardless of this forfeit, the Black Katts will continue to work toward their goal of competing in the national championship match on Dec. 7 in Palm Coast, Fla.

Kavajecz said, “Both coaches are working extremely hard and dedicating a lot of extra time in order to see us succeed. They remind us of our goals and what we need to do to reach and achieve those goals.”

Winona State will travel to Cedar Falls, Iowa to compete in the Sweet 16 match Saturday, Nov. 15. If victorious against the University of Arkansas, the Black Katts will compete the following day in the Elite 8.