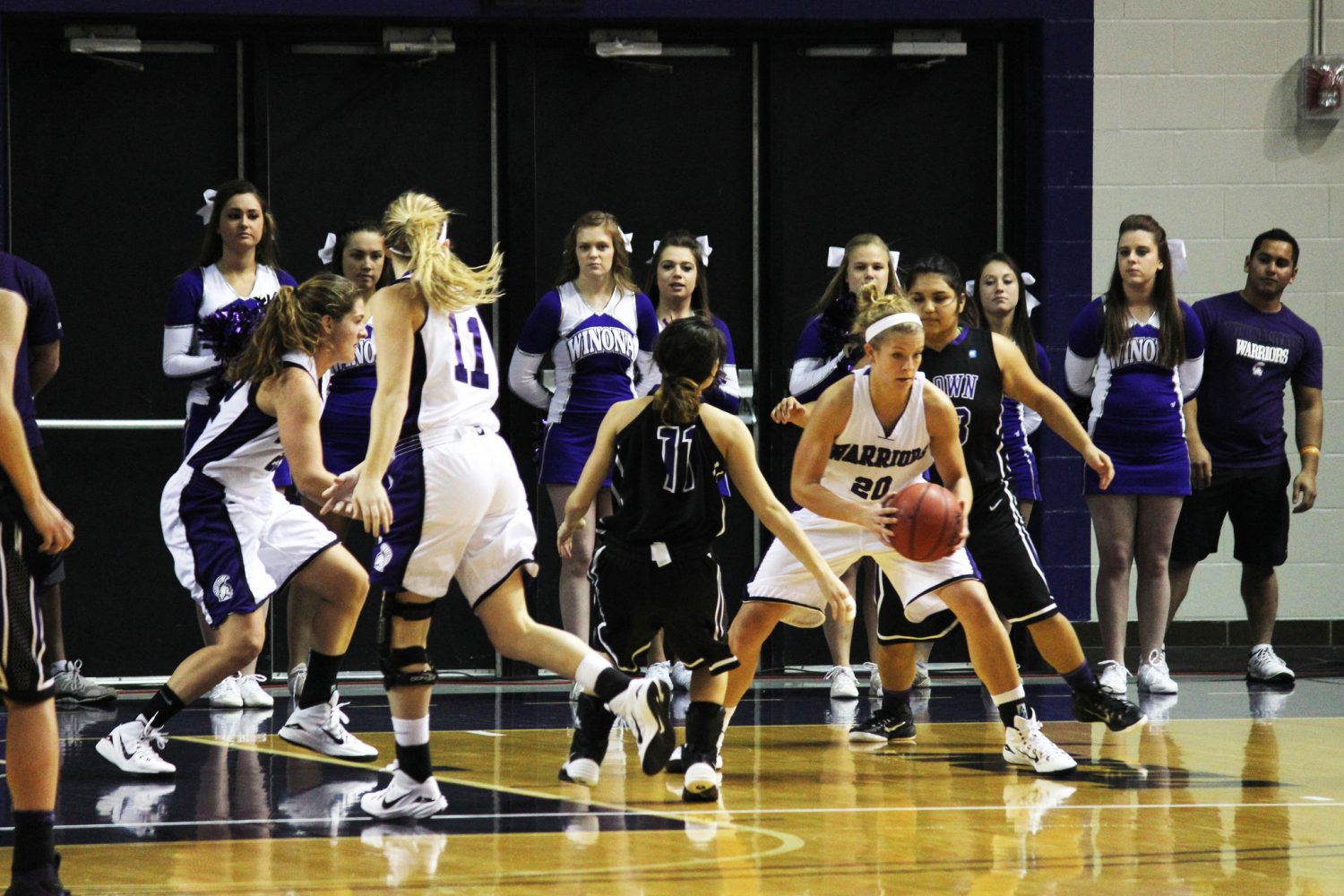 The Winona State University’s women’s basketball team began its 2014-2015 campaign this past weekend with a pair of wins at home against nonconference opponents Crown College and Trinity Christian College.

After one win and one loss in previous exhibition play, freshman forward Hannah McGlone said the team worked more on defensive and offensive principles in preparation for the first game of the season on Friday night.

“For the season opener we hope to have our defensive principles down as well as better execution on offense,” McGlone said. “A lot of it has to do with our execution of plays on offense and our discipline with the ball. We want to be smarter and play harder than our opponents.”

With a combined 186 points in the two games, the Warriors rolled past Crown College in their season opener with a 99-35 win.

Within the first 15 minutes of play the Warriors led the Storm 20-6, a lead they would never give up. After a short run with the ball, Crown College cut the Warrior lead to 24-14.

The Warriors further bumped the score 43-14 after scoring 19 unanswered points with under three minutes left in the half. At halftime, Winona State led Crown College by 30 points, 49-19.

At the beginning of the second half, the Storm cut the deficit 51-25 before the Warriors went on their second scoring run of the night, coming up with 17 unanswered points to increase the score 68-25.

The game ended with a 99-35 victory, the first of the Warrior’s two over the weekend.

Sophomore guard Jenny Tuttle was the top scorer for the Warriors with a game-high 16 points and was 6-of-8 shooting with a pair of 3-pointers. She also had two steals and two assists.

Sophomore center Kayla Timmerman scored 12 points, was 5-of-7 shooting and made six of her eight free throws.

Timmerman played her 2012-2013 season at the Division 1 University of Iowa before stepping out on the court as a Warrior for the first time this year.

She said she is having more fun playing basketball at Winona State rather than competing at the Division I level, which she said was more business.

“No matter what the game of basketball is still the same. It is more fundamental at Division II, and it is so much more fun,” Timmerman said. “We may not get all the perks Division I gets, but if I can smile and laugh at practice, that’s what means the most. “

In the second game of the weekend Winona State took on Trinity Christian and came away with their second victory 86-41.

Wirth added a career-high 13 points to the Warriors’ total score, with five of those coming from free throws and five rebounds.

Timmerman was right behind her with 12 individual points and six rebounds.

Weiland had nine points and eight rebounds, while McGlone and Hocking had eight points apiece.

With regular season play now underway, both McGlone and Timmerman said they agree that Winona State could be among the top three in the conference by the end of the season.

“I know we can be a top -three team if we believe we can,” Timmerman said. “We need to keep playing together as a team and improving. If we can focus on the little things and work hard, we will be doing great.”

McGlone said, “We hope to surprise some people this season.”

The Warriors will be back in action at 3 p.m. Saturday, Nov. 22 for a road game against nonconference opponent the University of Wisconsin-Eau Claire.