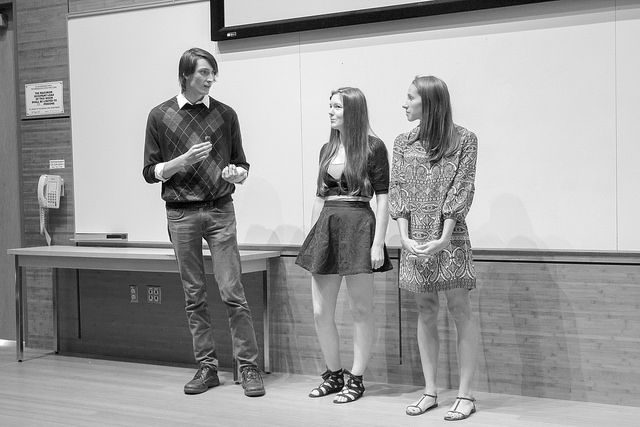 The Navajo Oral History Project started as no more than an idea. Grier knew from the start that he wanted to work with Native Americans, and after deciding on the Navajo Nation he began working with students and faculty from Diné College, a two-year community college in Tsaile, Ariz., that serves students of the Navajo Nation.

“Some trusted educators originally told me the Navajo people were very closed to working with white educators and that I probably would not be successful if I tried to do my program there,” Grier said.

Grier, however, was up to the challenge.

After traveling to Diné College, Grier said he knew right away this would be the perfect group to work with.

After four years of hard work and dedication, Grier and his co-director, professor Miranda Haskie from Diné College, were finally able to finish all the paperwork and research needed to begin his vision.

“It started as a course where students take what they learn in the classroom out into the field and do actual journalism work,” said Grier.

The goal of the premiere, Grier said, is to give students the opportunity to display their projects and educate others about the Navajo community.

Throughout the past six years, 62 students from Winona State and 39 students from Diné College have worked together to produce 27 separate films, all focusing on a different elder of the Navajo Nation. Of those 27 elders, nine of them were World War II Code Talkers, who used their native language while on the battlefield, Grier said.

Through the use of Interactive television students were able to meet, and then Winona State students travel to Diné College for three weeks, where they stay in the residence hall and work on the project with their colleagues.

After starting out with a small service project for their elder, the students then interview the elder two or three times throughout the project.

“My personal experience working with the Diné College students was nothing but a positive one,” Mann added.

By the end of the three weeks, the students created a 20-minute film, documenting the life of their chosen elder from their birth, to family, to work and even giving the viewers an understanding of tradition and culture.

“It’s hard work making roughly four hours of interviews into a 20-minute film,” Mann said. “From the beginning of the project to the moment the festival ended, I would have to say my experience was positively challenging,” Mann said.

After Winona State’s premiere this past Thursday, Sept. 10, the films were premiered on the Navajo Nation on Monday, Sept. 14.

“I was nervous that we weren’t going to portray the elders lives in the way that they deserve,” Grier said. “I don’t think that I’ll stop being nervous until after the Arizona premiere. Once the festival is completed, the films are then archived in the libraries of both Winona State and Diné College as well as the Navajo Nation Museum, and even the Smithsonian Institution’s National Museum of the American Indian.”

Grier added that he does not know of any other undergraduate project archived in the Smithsonian.

“I am so thankful that I was given such an amazing opportunity to not only learn, but to help teach others about a beautiful culture through the lives of the elders,” Mann said. “A huge thank you to everyone who came out to the premiere in support of the work that was put into it.”

As far as how the future of the film festival looks, Grier said they will “keep doing it as long as it is valued by leadership at both WSU and Diné College, and as long as funding lasts.”