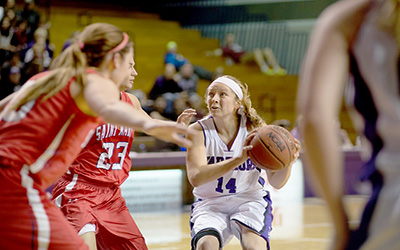 After spending the last two weeks on the road, the Winona State University women’s basketball team took on Saint Mary’s University for their home opener Saturday night. For Saint Mary’s, this was their first game of the season to count as an exhibition matchup.

“The girls are excited to play at home and finally get to show this community how hard we have been working,” Winona State assistant coach Ana Wurtz said prior to tipoff. The Warriors headed into the game with a 3-0 record.

Senior guard Connor Nagle hit seven 3-pointers en route to a game-high 21 points as the No. 16 Warriors defeated the Cardinals 90-68 in Winona.

“This game gave the confidence I had been missing at the beginning of the year,” Nagle said.

Nagle connected on four 3-pointers in the first quarter. Senior guard Alexis Foley and junior guard Tara Roelofs each added a three of their own to keep the Warriors perfect from 3-point range, ending the quarter six-of-seven. Winona State outscored St. Mary’s 29-19 in the first quarter, building a 16-point lead at one point.

Nagle drilled her fifth triple of the game in the early portions of the second quarter, increasing the Warrior advantage 34-19, and later hit another from behind the arc with 5:28 remaining in the first half to give Winona State a 42-28 lead. The Cardinals answered with a 13-2 run to cut the deficit to three, 44-41, going into the half.

Saint Mary’s tied the game at 44 apiece with 9:20 on the clock in the third quarter on a triple by Alexa Huisman. The Warriors countered with a 10-4 spurt to reclaim the lead, 54-48, halfway through the third quarter. Roelofs highlighted the run with a three-point basket to take a six-point lead at 52-46 before adding a left-handed reverse layup.

Nagle tied her career-high of seven threes with 13:40 remaining in the game. The Warrior offense ended the third quarter with transition play. Nagle gathered a rebound on her back and advanced the ball to junior forward Jenny Wieland, who finished on the other end with the basket and the foul to put the Warriors up 15 with 1:07 to go in the third. Weiland then connected with senior guard Emily Passint to end the quarter, putting Winona State in front, 74-58.

“I think we’ll strive in the inside-outside game and getting to the free throw line of course, is what we want,” Nagle said.

The Warriors converted on 12-of-13 from the free-throw line in the third after getting to the line just once in first half.

In the fourth quarter, first-year guard Kayla Schaefer came off the bench to score six points as the Warriors increased their lead to 25 on their way to the 90-68 final. Winona State outscored Saint Mary’s 46-27 in the second half.

“We got more stops in the second half but you gotta tip your hat to them tonight,” Winona State head coach Scott Ballard said.

Coming into the game, the Warriors averaged 16.3 assists per game while forcing 15 turnovers for the opposition. On Saturday, Winona State ended with 18 assists while forcing 13 turnovers by Saint Mary’s.

Wurtz said, “This week we have been focusing on the little things, the details. We had to rush into everything before going out to California, now it’s time to get back to the basics and perfect the little thing.”

Nagle hit seven of her 12 attempts from the floor to reach her 21 points, including 7-of-10 from behind the arc, to add to her nine rebounds and four assists.

The Warriors were shooting 93.2 percent from the free-throw line and getting to the line about 20 times per contest on the season. They finished the game 15-of-16

from the free-throw line, shooting 93.8 percent.

“It’s awesome, everyone is here for the bigger picture, everyone is selfless, and everyone is very welcoming. It’s really been fun,” graduate assistant coach Katie Meister said.

Winona State (4-0) continues play at home in McCown Gym with games against the University of Wisconsin-Eau Claire on Wednesday at 7 p.m. and Viterbo University on Saturday at 4 p.m.