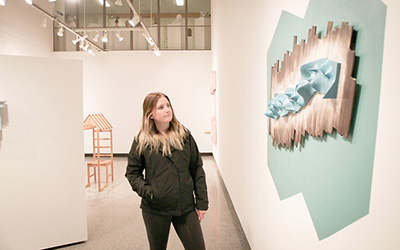 Since the first day of classes, Winona State University’s Watkins Gallery has been showcasing Jason Ramey’s series of artwork, “Medium Resolution.” Open 8 a.m. to 4 p.m., students are free to explore six of his sculptures.

Ramey has utilized his training as a furniture designer and also his knowledge of 3D printing to create the pieces in this gallery. Ramey’s art has been inspired by the world around and him and in which we live and thrive.

“I have always been interested in spaces and the history attached to a particular space,” Ramey said.

He asks questions like, “Who occupied this space before me?” or “Will this space be here long after I’m gone?” to fully take in a space and inspire the art within it.

“’Medium Resolution’ marks a new direction in my work,” Ramey said. “It is my hope that I can learn more about these spaces while peering through another lens.” This lens is the exploration and experimentation with different technologies and digital platforms.

3D printing has been a rising technology in many fields of work, including the art world. It has been changing the game in sculpting intricate pieces with exact detailing, different mediums of material and no limits to shapes and sizes.

Three of the sculptures featured in the gallery were made utilizing 3D printing. Through this technology, Ramey has created surreal objects out of ordinary pieces of furniture. His piece, “Mantel,” depicts a woman quite literally coming out of the woodwork with the back of her head stretched as it is still connected to the mantel behind her.

“To me, this piece is saying that the woman in the sculpture is the head of this home,” sophomore Maddi Kingsbury said.

Kingsbury, along with a few other students, were exploring the gallery between classes earlier last week. They enjoyed the way each piece made them feel something, even if they were not sure exactly what it was.

Junior Joleen Donovan commented on one of the pieces in the gallery.

““Bound’ reminds me of my life,” she laughed. “It definitely looks like a work in progress, but I’m strangely okay with it.”

Jennifer Martens, a transfer student to Winona State, caught on to Ramey’s style right away.

“It seems like he’s taking household objects and decorations and creating these complicated changes to make them about how the object is seen or used.”

“I think [this gallery] shows that people, in a way, invest themselves into certain spaces, whether they hold them dear or not, which leaves evidence of them for the future, and may shape the physical and psychological perceptions of said spaces,” said Scanlon

Senior Kayla Shaw said she was interested in what inspired Ramey’s pieces, specifically “Built in #2.”

“To me it seems to represent a man fighting against who he was to become something new and different but being pulled back by his past,” Shaw said.

While there is much to be said by students about Ramey’s work, there is still so much to be learned. Jason Ramey will be speaking about his work on Jan. 20 at 4 p.m. at the Science and Laboratory Center auditorium. At the artist talk, students can learn more about his work in “Medium Resolution,” as well as his previous works and experience.

Following the artist talk, a reception with hors d’oeuvres at the gallery will be held from 5 p.m. to 6 p.m. where students and faculty can enjoy the art and conversation surrounding the pieces.