Redemption in the rubble: A follow-up on downtown businesses damaged by fires 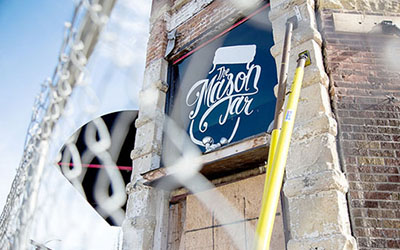 In the past few years multiple fires have devastated the downtown area of Winona, changing the day-to-day lives of many community members and employees alike.

The first in the series of fires began Sept. 13, 2013. The fire, which occurred in the Winona Islamic Center on East Third Street, continued to spread until it also engulfed the apartment above it along with Blooming Grounds, Sole Sport and Brosnahan Law Firm.

Mohamed Elhindi, who had been in charge of the Islamic Center for more than 10 years before the fire, recalls his initial thoughts when informed about the fire.

“The first thing that comes to your mind is, ‘I hope no one got hurt.’ Everything in this world is replaceable, but life is not,” Elhindi said.

After finding out no one in the apartments above had gotten hurt, Elhindi and the rest of the Islamic Center staff then went on to think about the logistics of what had happened and what was to come. The fire had apparently begun downstairs on the first floor of the Islamic Center, and was considered to be a product of old wiring.

“The Winona community stood by us during the whole thing, and we loved and are thankful for all the support we have been given,” Elhindi said.

The situation had been very hard on all involved, Elhindi said, and having no place of business made it very hard to worship.

“The House of Worship in Winona opened their house for us, so that we would have a place to worship,” Elhindi said. “And we received heartfelt support from the whole community.”

Located only a block east of where they had originally been located, the Islamic Center is beginning to get things back in order.

“We will be moving in around May, right now we’re just making sure everything is okay with the new place,” Elhindi said.

The Islamic Center and the surrounding businesses were the first in a string of fires to ravage downtown Winona.

On Sept. 4, 2014, KidSport, located in the historical YWCA on Center Street between Fourth and Fifth Street, became downtown fire number two in the last few years.

Rob Murray, owner and head coach at KidSport, feared how the business would continue without a permanent location.

“The hardest part was finding a suitable location for the new building,” Murray said.

Finding a place that is large enough to hold two separate gyms with ceilings that are high enough can be a tough find in the Winona area, Murray said. Murray suspects the fire started due to old wiring just as the Islamic Center had, since the building also had the original wiring.

“We spent the first week after the fire calling places non-stop,” Murray said. “We were on the verge of selecting a building that wasn’t good enough for what we needed, just out of desperation, when we came upon the open slot in the Winona Mall.”

The large gap in the mall, which had housed the second location of Midtown Foods until 2009, had been vacant since going out of business.

“We began moving our equipment no more than two hours after the mall said ‘yes,’” Murray said.

KidSport is on a lease currently and are still in the process of finding the perfect building.

“We will stay here as long as we need to. The only time we will be moving is if we find the ideal location,” Murray said.

As for the equipment, Murray said they were lucky to get as much as they could out of the fire.

“Most of the equipment was a total loss. Probably a third of it burned completely, and a quarter of it had too much smoke and fire damage to be considered safe. Everything in the dance room, our offices and the boy’s gym were a total loss,” Murray said.

The rest of the equipment was salvaged with the help of a steam and ozone clean and were then placed in a room with multiple dehumidifiers.

“Everything had smoke on it, but we were all surprised with how much came off,” Murray said. “When we set them all outside to dry, the equipment took up more than a quarter block.”

Murray especially remembers the help and support KidSport received from the Winona community after the fire.

“We had people calling us up, donating money for equipment and even helping us move stuff from one location to the other. We had people contacting us saying things like, ‘I remember going here when I was younger, if you need any help, let us know,’” Murray said.

Since the move to their new location, Murray said grandparents have been staying at KidSport to watch their grandchildren practice.

“In our old building, you had to walk up a flight of stairs to get into the building, but now that you walk right into the viewing room, it is much more accessible,” Murray said.

More recently, in February 2015 The Mason Jar and the apartments above it were damaged in a thick black haze fire.

Unlike other businesses that were forced to move or rebuild, owner Chase Hoffman decided to renovate the historical building. According to a follow-up article in the Sept. 9, 2015 issue of the Winonan, former writer Emily Dean reported Hoffman said, “Over the past 10 years we’ve had it, we put a lot of work into the apartments upstairs, and I think it’s a neat building. It brings a lot of character to that block.”

Dean continues in her article Hoffman’s restoration plans to include additional apartments to the first floor as well as allowing room for a commercial business.

So even in the ashes of these unfortunate losses, a silver lining can be found.