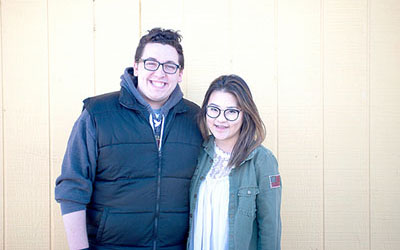 Winona State University seniors Brett Burger and Ka Vang received the Krueger scholarship and encourage other students to seek out and apply for scholarships.

These two students received this award due to their academic excellence and involvement on campus.

Burger is double major in public relations and theatre and has recently accepted a full-time position as an administrative associate at Lyric Arts Theatre in Anoka, Minn.

“It’s marrying my two majors together,” Burger said. “Marketing for a theater.”

Burger said he would one day love to move to New York to do marketing for theater, and also wants to travel the country working with a touring musical.

“I want to be the Olivia Pope of theatre,” said Burger.

Vang is an advertising major, with an individualized studies minor and emphasis in public relations. Vang has always been an aspiring creative director. However, she has been interested in ad agencies lately.

Regardless of her future full-time job, she wants to do freelance photography, as she currently enjoys running her own photography business.

Burger and Vang met through their orientation class during the first week of classes.

Now, the two currently work together in the university’s communication department for the interim director of communications, marketing and media relations Andrea Northam.

Burger and Vang heard about the Krueger scholarship from Northam.

This scholarship is from Darrell Krueger, the thirteenth president of the university who is known for transforming Winona State University to what it is today.

This last name should sound familiar, as the Winona State library is named after him. Krueger oversaw its completion along with the completion of East Lake Apartments and the Science Laboratory Center. Krueger also closed off the streets which once bisected campus.

This scholarship is for students who display academic excellence. Burger and Vang were told they were chosen for the scholarship because of their leadership in the office  and across campus.

Burger holds many positions on campus. He is the public relations specialist at MSUSA Winona, student coordinator of marketing and publicity for the THAD department and is a member of the THAD honor society.

Vang said her job on campus has helped kick-start her into the world of public relations. It has helped her learn about consumer relationships, communication and writing skills and has given her the chance to network.

Vang explained if it was not for her current job on campus and the connection she has made with her boss, she would not have heard about this scholarship opportunity.

“It is important for students to stay active on campus,” said Vang. “And in classes, meet people to network and connect with.”

Vang said before this award she did not even think about scholarships. Burger said he has applied for many scholarships, and even gets one for being left-handed.

Vang got the opportunity to meet Krueger and his wife, Nancy, during homecoming this year.

“It was so rewarding to meet them, they are really sweet,” said Vang. “It’s nice to put a face to someone who is helping you and who is supporting you— it’s more intimate than a name on a page.”

Burger and Vang encourage students to take the time to apply for scholarships and advise students to talk to departments on campus and to get involved and network.

“I think it is important for students to be actively seeking for scholarships,” Burger said. “People are out there who want you to succeed and want you to do well.”