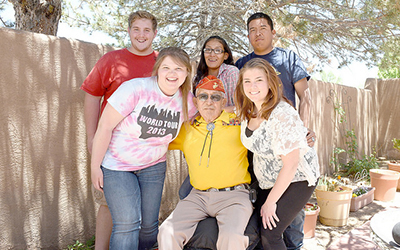 All university projects have to end at some point, but many tend to finish before their time. This is the case for the Navajo Oral History Project.

After 10 long years of work, four of those spent setting up the project, followed by six years of the project taking place, it will not be continuing for the 2016 year. In the project’s six years, 62 Winona State students and 39 Diné College students participated in the project, which featured 27 elders, nine of which had been Navajo Code Talkers.

The Navajo Oral History Project was founded by professor of mass communication Thomas Grier in late 2005 and spent four years in various planning phases before 2009 when student fieldwork began. The approval process took two years, with many telling Grier to just give up.

In 2015 the project was in its sixth year of operation and had just gone through a renewal for the next three years. Winona State has worked with Diné College, a two-year community college in Tsaile, Ariz. on the Navajo reservation throughout the duration of the project.

Grier is still baffled about the ending of the project.

“It’s hard to say,” Grier said. “My opinion is that they’re going through tremendous upheaval at the tribal college.”

The president at Diné College has recently been put on administrative leave and had the leave extended twice. In the meantime, an interim president had been placed in the role. Along with the president, the academic dean had been moved to a different position, placing an interim dean in his spot.

“Everyone was all excited for the next few years. I was getting, ‘we’re ready to go,’ ‘we’re excited.’ Then I slowly started getting some different answers,” Grier said.

Grier asked the college if they were on or off before he received an official notice saying that the project was now terminated.

However, in private messages exchanged later, there were hints at how this might only be for now.

“There’s nothing to say [the Navajo Oral History Project] won’t come back, but at this point it can’t be this summer,” Grier said. “Honestly, I believe that it’s just because they’ve had so much upheaval recently, that it just wouldn’t have been as good as it could be.”

The close of the Navajo Oral History Project

brought different feelings to students and faculty alike, but each connected in some way.

For Grier, sadness was his main emotion.

“I spent 10 years of my life on this project,” he said. “I came up with the initial idea, and put six years of actual work in it before the festival began. I traveled there five times a year. I feel like it’s my second home. And I did it all out of my own pocket, mostly.”

Grier said he never accepted a salary while doing the project because he only wanted to help the Navajo people.

“It’s like childbirth,” Grier said. “I created the project, and I wanted to see it through.”

When first going through with this project, Grier was told if he wanted to gain the Navajo people’s trust, he had to make sure he kept his word. After making this promise, Grier said he hopes to honor the last two years of the agreement.

“It’s such a great project, and students learn so much from it,” Grier said.

Robbie Christiano, a former student of Grier’s who is now the director of development and university advancement at Winona State, said, “[Finding out about the project ending] was emotional. It offered wonderful opportunities you as a student can never get in a classroom.”

Christiano said the project also fostered stories of Native Americans because sometimes society has no idea of background, upbringing and things that have happened to them and other aspects.

“You don’t have the context, their story,” Christiano said. “This project built a bridge between us and the Navajo nation.”

Christiano said to open up their eyes in such a way as this was great for both their professional and personal growth. Christiano was in the class in 2010 and 2011, and for the past four years he has helped serve as an assistant to Grier.

Christiano went on to say, however, that it is not all sadness that the project ended.

“[The project] had a great run, and I believe the body of work speaks for itself,” Christiano said. “Lots of important documents were created, and the Code Talker Association really appreciates it. We had hopes and aspirations to finish the project, but conversations are still happening on how to accomplish the goal of finishing to document all the code talkers.”

Kim Schneider, a senior at Winona State, participated in the event this past year, and was worried when she first heard the project was ending.

“My first thought when I heard of it ending was worrying whether my group had anything to do with the ending of it,” Schneider stated.

During the editing process some mix-ups happened, and a heated discussion between the Diné students, Winona State students and professors began. After finding out her group had not been a deciding factor in the ending of the project, Schneider is saddened about all the people who would not be able to tell their stories.

“A few code talkers have died over the years since [the project] started,” Schneider said. “Thinking about how the culture is already fading and not being able to contribute to this project is very hard.”

In the end, Grier wants to focus on the success the project has had despite the limitations.

“I feel hugely successful that we were able to do this and make it work,” Grier said. “We can be proud of the legacy, but I feel like it could have been more successful. I owe it to do more, but would it be unethical to go out and finish the project without the Winona State and Diné College students,” Grier said.

Grier emphasized how he had hoped for the project to continue forever.

“The original plan was to do five years of the project, then turn it all over to Diné [College],” Grier said.

The college had been trying to help develop a journalism major at Diné College, but Grier said this might not happen.

“I didn’t think I could run the project forever,” Grier said, continuing that he had wished to work on it a little more before passing it on.

Christiano said, “The most important part of the Navajo Oral History Project for me was realizing, in my own life and with our students, that people are a lot more alike than we are different.”

Christiano added how it did not take more than a couple uncomfortable days to become friends with the students from Diné College, and he is still friends with some of them.

“[The project] helped me learn pieces of US History that I never would have learned in textbooks. Things like the Navajo livestock reduction, the Long Walk, which is basically their Trail of Tears; these are things you’d really only hear firsthand,” Christiano said.

Schneider added how the impact Grier has made on the students and the project cannot be ignored.

“Grier puts such an amazing effort into this project and downplays how much time he puts into it,” Schneider said. “It gives students an amazing opportunity.”

Though, at this point going out for the 2016 year would not be possible, Grier said they are hoping to get things back and running again for the summer of 2017.