What the struct? Summer construction continues 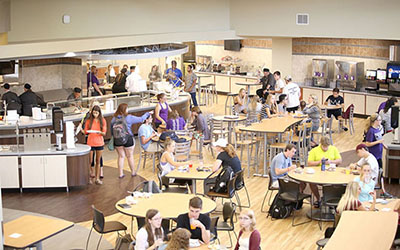 Winona State University’s campus is in a constant state of development. Most returning students have seen the campus in its before stages of construction projects, but for first-year and transfer students, everything is new and changes to campus are not as recognizable.

The renovation of the Jack Kane Dining Hall was the number one focus for the construction projects. The dining hall is one of the most frequented resources on campus, and is the most common gathering grounds for students, according to John Sinniger, senior director of Chartwell’s Dining Services at Winona State.

“The idea was to open it up and maximize seating,” Sinniger said.

This summer’s project added approximately 70 extra seats to the dining hall, on top of another 70 that were added in other renovations the year before.

Sinniger said the renovation of the dining hall also aims to improve healthy eating on campus.

“We wanted to reconfigure it in a way where certain things weren’t hidden,” Sinniger said.

The makeover of certain things such as the salad bar, which used to be tucked away and completely hidden from the seating area, has decreased traffic in the eating space. The hall also has a complete new set of dishes and utensils.

As well as reconfiguring the space, the project has added healthier and vegetarian options for students.

Another new addition is the G8 station. This station contains food free of top-eight allergens. Sinniger said all items served out of that area are isolated. This includes all pots, pans and utensils used to prepare the food to eliminate any chance of cross contamination issues. The station also has its own dishwasher.

Despite the changes, returning students have mixed opinions about the renovations.

“It is a lot easier to navigate,” CJ Kallebig, a senior English language and literature major, said. “There’s a lot more room to move around. You’re not going to run into anyone with your food. There’ve been a lot less spills that I’ve noticed.”

Yet, the expanded menu options did not impress upon Collin May, a junior majoring in composite materials engineering.

“There’s not much difference between it and last year besides the layout,” he said.

Kallebig and May both noted disappointment at the soft serve ice cream machine not yet being set up. Schaub did not share in this sentiment.

Along with the ice cream machine, some of the signage is not yet set up.

The dining hall updates are not the only changes occurring on campus. The next renovation to be completed is the coffee shop change in Somsen Hall from Mugby Junction to Caribou Coffee.

“We proposed to expand [the coffee shop] to create more of a gathering space,” Sinniger said.

More space will be added, including a newly added seating area and increased grab and go options.

The targeted date of completion for Caribou Coffee is September 8. Upon opening, the shop will run Monday through Friday from 7:30 a.m. to 4 p.m.

For those looking for coffee on the weekends, the Darrell W. Krueger Library will be the place to go.

The library will be adding an Einstein Bagels and Caribou Coffee combined concept, called Coffee & Bagels. According to Sinniger, Winona State will be the second university in the country to house this model, right behind the University of Georgia.

Construction of the project is set to be complete by September 16. But bagel fanatics beware: Einstein Bagels reserves the right to train employees for up to three weeks, so the currently planned opening date is September 28.

Library staff said they are hoping the addition of more food options would encourage more students to utilize the library’s resources more.

“I think having a food service in the building will serve a need that many of our students have been asking for fore a long time,” librarian Allison Quam said.  “They’ll have closer access to some of our library resources, and wherever you sit in Einstein’s, you’ll have a really clear shot of a librarian.”

“Most academic libraries I’ve worked in in the past have had a coffee shop,” he said. “It’s exciting to be a part of that. Coffee and books do go hand in hand together.”

The library also updated furniture over the summer and added new book displays to the first floor. Van Cleve also said he hopes the renovation will help draw attention to these new resources for the students.

Another element to the construction is the seating area will remain open even when the shop is closed. The room, the seating and a microwave will be fully accessible to students for as long as the library is open.

Next are the pedestrian tunnels, aimed to finish in the near future. According to a university press release, the tunnels are first and foremost “an effort to improve pedestrian safety near the railroad tracks.”

This projected completion of the tunnels in November comes in the wake of several train-related accidents in recent months.

The tunnels will be accessible by both stair and ramp, passing safely beneath the tracks. In addition to the actual tunnels, the area round them will be “surrounded by new landscaping and site improvements to make the new construction blend in with the adjacent campus building structures,” according to the university.

There is also construction happening in the McCown Gymnasium.

The old entrances have been filled in to allow space for new bleachers. The new basketball court will be rotated from the original orientation and it will have seating on all four sides.

“We have a lot of pressure on McCown both for recreation and athletics,” Winona State President Scott Olson told the Winona Post in the early stages of planning.

Over on west campus, construction has completed on the Lourdes Hall C-Store, which was fully renovated, nearly doubling the space for product selection.

But the updates to campus are far from over.

While many of the projects are being completed, more are being planned to come. For the summer of 2017, Winona State facilities plans to completely renovate the Smaug Food Court, opening up the entire space and introducing a yet to be named coffee venue to the area.