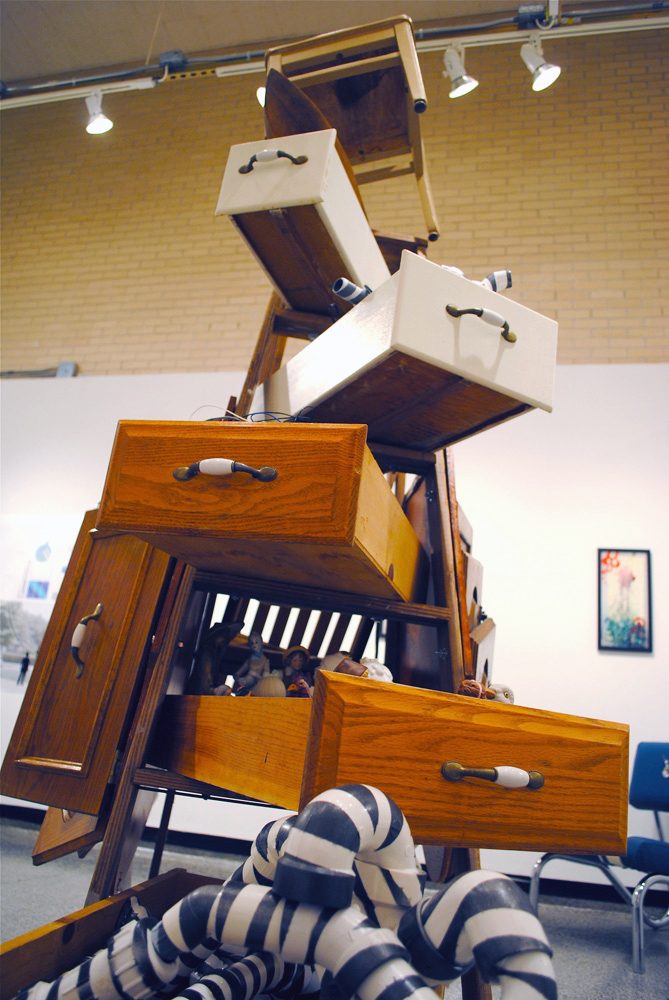 Professor Seho Park, employed in the Art Education and 2D Design program, has much to say on the “meaning” of art.

Standing among fellow members of Winona State University’s art department faculty, he explained his perspective and his inspiration for his work for a rapt audience of attendees, most of which were taking diligent notes as they trailed the philosophical flights of Park’s explication.

That is, after all, why most came to the faculty art show reception on Wednesday, Sept. 5. It wasn’t for the complementary snacks and refreshments, which had been raided and abandoned long before, but to get an artist’s take on his work: the “meaning” of his art.

One of the many works on display, Park’s contribution was a large, rectangular canvas completely covered with several splotches of vibrant colors. Having stared at it and after I chewed it over mentally for what I seemed to me more than enough time, I was still lost when it came to extracting “meaning” from the piece.

Park’s comments were less about an extraction and more about a process. He explained that he began his work by painting the canvas completely white. Though at this point the piece was already a “painting,” he proceeded to add to it, to “disturb, deny [and] change the original integrity” of it. The finished product, a brilliant patchwork of color, is, according to Park, a return to the place where the painting started: the blanket unity of white. Park was interested in recreating the trials and scars of a long journey, which takes us right back to the beginning again.

Every piece at the faculty art show had a unique intention behind it. The centerpiece sculpture by professor Anne Plummer draws the eye immediately. The structure consists of several drawers spiraling upward to a teetering empty chair, each drawer filled with odds and ends, such as porcelain figurines and electrical wiring.

Plummer calls the piece “Dream Journey,” and described it, indeed, as a visual journey that should hit home for most college students hoping to achieve their goals. The sculpture evokes the precarious yet exciting nature of the climb leading to the coveted chair, and everything they meet and take with them along the way.

Professor ChunLok Mah’s contribution is a design for a sculpture that will actually appear on campus in the future. Combining new iPad and iPhone technology with organic structures and sustainable materials, Mah plans an interactive work of art featuring an LED screen and motion- sensor technology. The piece fascinates in both form and function, bringing a singular marriage of technology and art to a rapidly modernizing—but still natural, locally involved and creative—university.

Standing before this collection of pieces, each vastly different from the others, Park also commented on his painting’s portrayal of “unity” in “variety,” which accurately summed up the effect of the entire art show. The art faculty of Winona State brought their talents and every medium imaginable to the art show, from soft, contemplative pastel landscapes by professor Donald Schmidlapp, to a re- purposed upholstered chair embroidered by professor Bonnie Schetski-Heineman.

Graceful etchings of marble heads in cliff sides hung next to a series of whimsical ceramic robots. Colors, forms and emotions shouted and whispered from all corners of the gallery, each bringing a completely different effect to the whole of the art show.

The gallery will be open Monday through Friday, 8 a.m. to 8 p.m. until Sept. 12. The faculty’s mesmerizing works will pave the way for future student art shows, where Winona State art students will get the chance to add their distinct voice to the artistic body of the university.