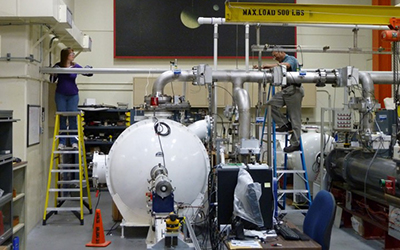 Some people know what they want to study from the moment they learn a certain topic. Jennifer Anderson started learning about astronomy at six years old and has wanted to be an astronomy professor since fifth grade.

Anderson started teaching astronomy at Winona State University during the fall of 2005.

“It was kind of surreal to see 200 students in [the] SLC auditorium and think of my teacher when I was in fifth grade,” Anderson said.

“Impact cratering is the most common process in our solar system and effects anything that has a surface,” Anderson said.

An impact crater is a crater formed after something like an asteroid or meteor hits the surface of an object.

In her efforts to continue studying and researching impact craters, Anderson has been awarded a grant from NASA. She has been sending in grant applications to NASA since 2011. Within the grant  this proposal, Anderson discussed how her team will conduct experiments with impact craters and how the surface effects the formation and shape of the crater.

To complete these experiments, Anderson has been working with Mark Cintala, who runs the Experimental Impact Laboratory at NASA’s Johnson Space Center in Houston, and Jeff Plescia who works in the applied physics department at John Hopkins University.

With the grant, Anderson will be able to bring a small group of students with her to the Johnson Space Center as research assistants.

“I will be able to pay for their traveling and housing and food and they will spend time down at the lab working,” Anderson said.

According to Anderson, the NASA grant awards $500,000 in total. Half of this money will be sent to the Johnson Space Center to pay the expenses necessary to run the laboratory, and the other $250,000 will go to Winona State. The $20,000 used to pay the students for their travel, room and board will come out of the remaining $250,000.

“Doing undergraduate research is a very special experience,” Madie said. “Introducing that caliber of responsibility for a student finally gives them a feeling of doing professional science.”

Senior Tyler Wells also got the chance to work with Anderson at the space center, and described it as a “life changing experience.”

“I got to tour the inside of the lunar receiving facility and hold a piece of the moon in my hands,” Wells said. “It was a surreal experience and she has inspired me in many ways.”

Alumna Molly Johnson was another student who went to the space center and still keeps in contact with Anderson to this day.

“Dr. Anderson was, and still is, a mentor to me and a friend,” Johnson said. “She pushed me when I needed it and made me go hiking when I got too obsessed with school.”

Along with sending the students to Houston, the grant will also provide the funds needed to travel to different conferences.

The grant will not only provide students with new experiences, but it will also create new experiences for Anderson, which, will help enrich the learning environment for her students.

“I am learning all sorts of things about our solar system and I can bring this information back to the students,” Anderson said. “Keeping myself intellectually curious and active really helps to benefit my students.”

When the research in the laboratory is finished, Anderson and her colleagues have to go over the data collected during the experiments, and the NASA grant is also giving her the chance to get paid for doing this research.

“It will take months for me to start seeing and understanding what the information from the experiments is telling me,” Anderson said. “The grant gives me the time and money I need to take care of the tedious work.”

After receiving the grant, Anderson feels a sense of recognition from not only NASA, but also from the scientific community.

“To get a grant like this, it means that the people at NASA and the other scientists in the community have said that my work is valuable and they have faith that I can do this and solve these questions,” Anderson said.

With the extra opportunities provided by the grant, Anderson and her students are hopeful for the future.

“I was enormously happy that Dr. Anderson received this grant for herself, but part of that had to do with how happy I also was for her future students,” Wells said. “The fact that the grant allows more students to do this research work is profound.”