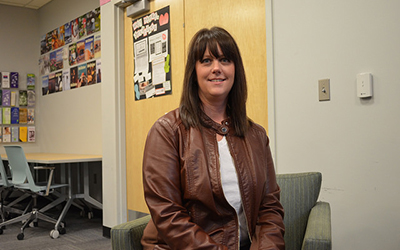 Winona State University has been making efforts to end rape culture and decrease the number of sexual assaults on college campuses. According to statistics from the National Sexual Violence Resource Center, one in five women and one in sixteen men are sexually assaulted while in college.

As Winona State’s gender based violence prevention and intervention coordinator, Heather Gerdes wants to be a part of this change.

In 2013, Winona State received a grant from the Department of Justice’s Office on Violence Against Women. Through this $300,000 grant, partnerships with Winona’s Women’s Resource Center were made, and the RE Initiative, the campus club focused on education and prevention of gender based violence, was created.

Prior to the creation of the grant, Gerdes was working in an orthodontist’s office as a financial coordinator. When the opportunity at the Women’s Resource Center appeared, she felt obligated to become involved.

“It made sense when the position became available, that this was where I needed to be,” Gerdes said.

Gerdes graduated from Winona State in 2012 with a major in communications and a minor in women’s, gender and sexuality studies.

In 2016, the grant from the Department of Justice had expired after three years. Last semester, a proposal for a grant renewal was submitted and approved. Winona State now has another $300,000 grant which will extend to 2019.

According to Tamara Berg, director of the women’s, gender and sexuality studies department and the author of the grant, Gerdes’ position will be covered by the grant and by the university.

“The university and the grant will be paying [Gerdes] for her position 50/50 over the next three years,” Berg said.

Berg also discussed how this is not necessarily a permanent position, and the choices the university will have to make once the grant expires.

“It is not what we consider a ‘permanent’ position, because at the end of those three years, the university will decide whether they move forward with the position as it is, whether they make adjustments to it or whether they eliminate it,” Berg said. “When the grant comes to an end, 50 percent of the funding will be cut off and at that time the university will have to make a decision about if they want to continue that work.”

Lori Mikl, Winona State’s Title IX coordinator and the supervisor for this position, will work directly with Gerdes.

“I am looking forward to figuring out how this position can really help with the work that my office does related to sexual assault response on campus,” Mikl said.

Gerdes will also continue to lead the Coordinated Community Response Team (CCRT) meetings. The CCRT is a group of individuals within the campus community who work continuously to find effective ways of gender based violence prevention and different response methods.

Gerdes and the RE Initiative students have been working to make their methods more inclusive for different communities.

“With our education currently, our graduate assistant who works with us and our RE Initiative students are working to put together something called PACT Plus,” Gerdes said. “The Plus is going to be different things like, PACT Plus LGBTQ community, PACT Plus international students and PACT Plus students of color. We have all of these different targeted topics that intersect with bystander intervention and gender based violence.”

By involving the different communities into the PACT program, Gerdes and the RE Initiative have been building relationships with many different organizations within the university.

Michael Krug, a graduate assistant and member of the RE Initiative discussed the importance of building these relationships.

“As a part of the RE Initiative we are working on education about gender based violence as it pertains to different communities on campus, so international students, students of color and the LGBTQ community,” Krug said. “We have been working on building relationships with Inclusion and Diversity, International Services and Full Spectrum, just to make sure we have the best education materials going forward.”

In addition to these groups, Gerdes has been building strong working relationships with Winona State’s Security and athletics. In March, Gerdes and members of the RE Initiative will be presenting and educating in front of athletic coaches and staff.

One of Gerdes’ main goals for her position is to continue to provide support for the victims and survivors of sexual assault.

“It is a hard topic to deal with, but it is a necessary one to discuss,” Gerdes said. “I want to be able to create a safe space on campus for survivors. I think lending my voice to empower survivors and support them is helpful.”

According to Mikl, this position will provide survivors with the resources they might need after reporting an assault.

“This position is also going to help with victim services for students,” Mikl said. “Helping coordinate changes of class schedule, changes of housing, anything that a student might need to help them feel safe on campus while they are pursuing an investigation or not.”

For future plans, Gerdes would like to maintain the relationships that have been built and create new ones. She discussed making plans to work with other Minnesota State universities, and also presenting to high schools and middle schools.

“When I was growing up, this wasn’t something that I thought I would do. It was an opportunity that I had seen and I thought something needed to be done; and it was the right thing to do,” Gerdes said. “If I can help somehow and make a difference to even one person, making sure they get the resources that they need and the support they need and on the flipside of that, changing a culture and educating our youth—our young men and young women—then I have done my job.”