Desolation of the Smaug 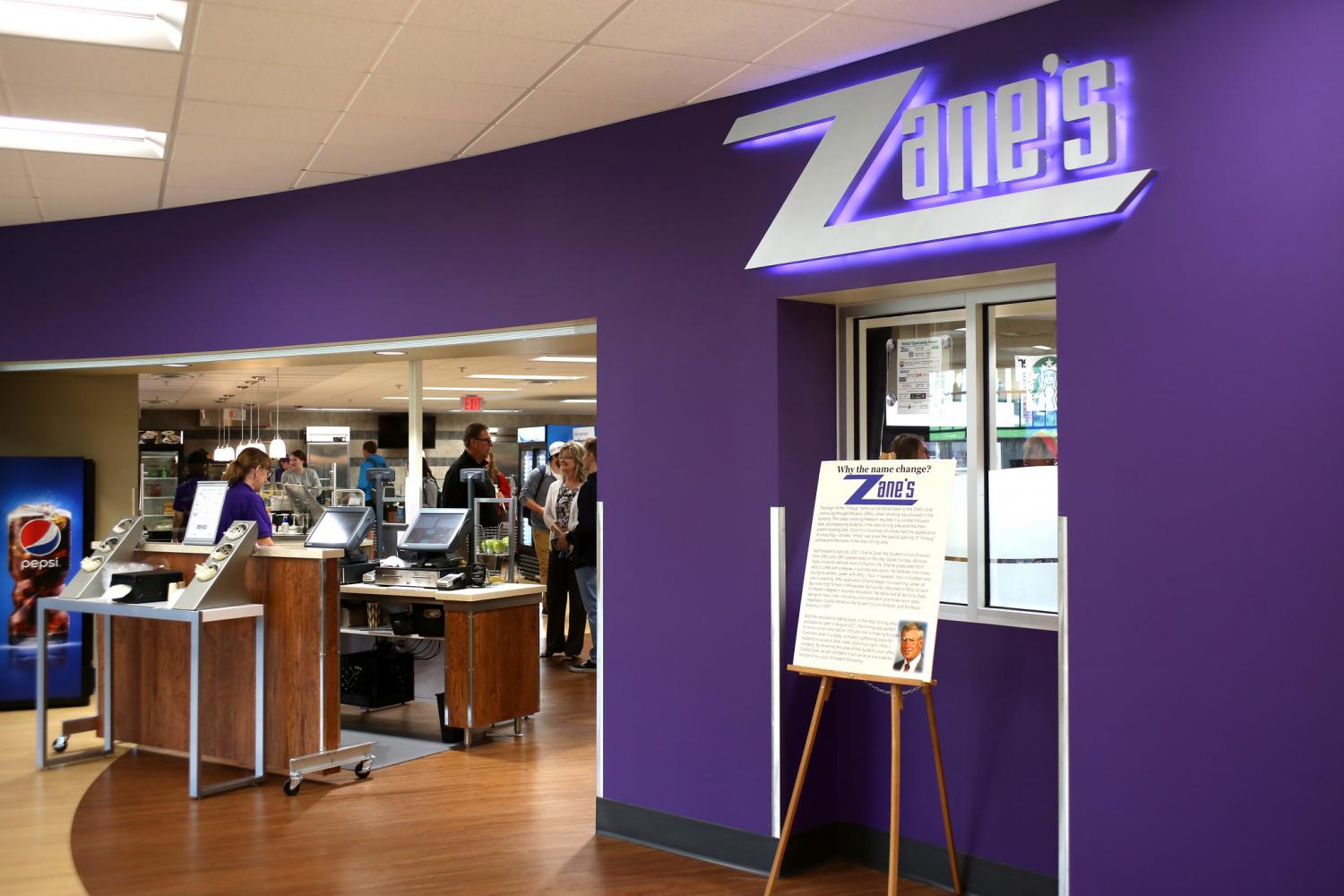 The entrance of the new food mart in Kryzsko Commons. The area, formerly known as The Smaug, was renamed Zane’s.

The Smaug Food Court in Kryzsko Commons went through a series of renovations while students were away this summer—from the Smaug, to ten-foot tall dirt piles, to Zane’s. Now you can get your favorite burrito bowl and energy drink in the same one stop shop.

Renovations began after the end of Winona State University’s school year last May. The Smaug was completely torn up all the way down to the dirt to address plumbing and electrical issues. A temporary wall to keep dirt and dust contained was put up, according to Director of Dining Services John Sinniger.

There are a few hurdles left before Zane’s is completely done, Sinniger said. Dining Services must address signage and staffing issues, as well as fix a set of registers that are not working properly yet.

“It’s a new area, new venues, it is fun times,” Sinniger said, “It is a wow factor—a lot of ‘Wow this looks nice’ and that is our goal. We want to stay up to date and new. You don’t want to stay tired [and] we want to improve whenever we can.”

The new food court will include a Panda Express, which will be completed on Sept. 20, a café that serves Starbucks coffee and beverages and a pizza build at Mondo Subs, which is not finished due to pizza oven issues.

One major renovation involved tearing down Kafe Kryzsko to combine it with the new food court. The Kafe Kryzsko coolers and gondolas are now located in the middle of the food court where students can quickly grab everything they need and check out at one of the four registers stationed by the door.

Changing the name of the Smaug has been on the campus backburner for some time now, according to Reed.

“If it was named after a person, we wouldn’t touch it because that would be disrespectful,” Reed said. “I was standing with the architects and everyone else involved with the renovation, gathered around the blueprints, when it just clicked. The timing was perfect for a new name.”

Zane graduated from Winona State with a degree in business education in 1964. He also lettered nine times from sports: four in baseball, one in wrestling and four in football.

“Zane was a Winona State alumni, a hall of famer in three sports [and] he was the Grand Marshal at the homecoming parade. Charlie was a legend around here,” Reed said.

Zane returned to Winona State in 1966, serving as a faculty member in various departments before working as Student Union Director from 1972 to 1997. Even after retirement, he remained active at Winona State’s Retiree Center.

“He had a great smile, and everyone knew him,” librarian and archivist Russ Dennison said.

Zane passed away on Easter Sunday this year after a short battle with cancer, ten days shy of his 80th birthday.

To rename the Smaug, Reed had to get approval from Chartwells, the executive board of Student Senate, the Food Service Committee and the Cabinet and Alumni Association. Everyone agreed it should be Zane’s.

“She starts crying and says, ‘Oh my god, Joe, he would be honored,’” Reed said.

Zane’s has come a long way since Kryzsko Commons opened in 1965. The Smaug opened in 1946 in Ogden Hall and was called the Student Exchange. In 1954, the Exchange was moved to the old gym in Somsen Hall.

The Smaug received its name from when smoking was allowed on campus. The Student Exchange was extremely smoky and was originally nicknamed the Smog.

Once Kryzsko Commons opened, the Smog was moved there and the name changed to “Smaug” in 1986, according to Dennison.

Smoking on campus was allowed until the 1990s. Students and professors could smoke in class, flick their ashes and ground their cigarette butts out on the floor.

During the tobacco faze out period, Kafe Kryzsko, which was originally three rooms, had one room designated for smokers while the other two were for Student Senate, Dennison said. Kryzsko Commons is the most renovated building on campus, according to Dennison, because student interests are always changing.

The hardwood floors and stage in the Student Activity Center used to be six bowling lanes that stretched into the space currently occupied by the Student Senate and Greek Organization offices. Next to the bowling alley was a student game room filled with ping pong tables, pool tables and more.

Bowling was hugely popular in the 1960s and massive amounts of Americans would bowl in leagues or clubs, Dennison said. Then in the late 70s and early 80s, students paid more attention to video games.

“The bowling alley and game room were ghost towns after video games became popular and the campus became a laptop university,” Reed said. “Students were not out shooting pool, or air hockey, they had their computers.”

Another past renovation is the solarium, which used to be a parking lot and then a patio where people would grill burgers and hot dogs on nice days, Dennison said.

“My goal was an all season porch, but we had to lock the doors in the winter—because it was too difficult to shovel and the snow was too much—and unlock it once the snow melted,” Reed said. “But in the summer, it was too hot down there. There was no breeze, and the bees were awful.”

Kryzsko Commons has been an evolving building, changing with the times and with student interests. Zane’s renovation is not the first of its kind and it will not be the last. But Charlie Zane will be memorialized in an area on campus where he contributed immensely.

“Charlie was my boss for eight and a half years. He was me for 30 years,” Reed recalled. “Charlie was larger than life. Everyone loved and adored him. He was my mentor. He told me what to do, what not to do and now I am trying to follow in those big footsteps.”