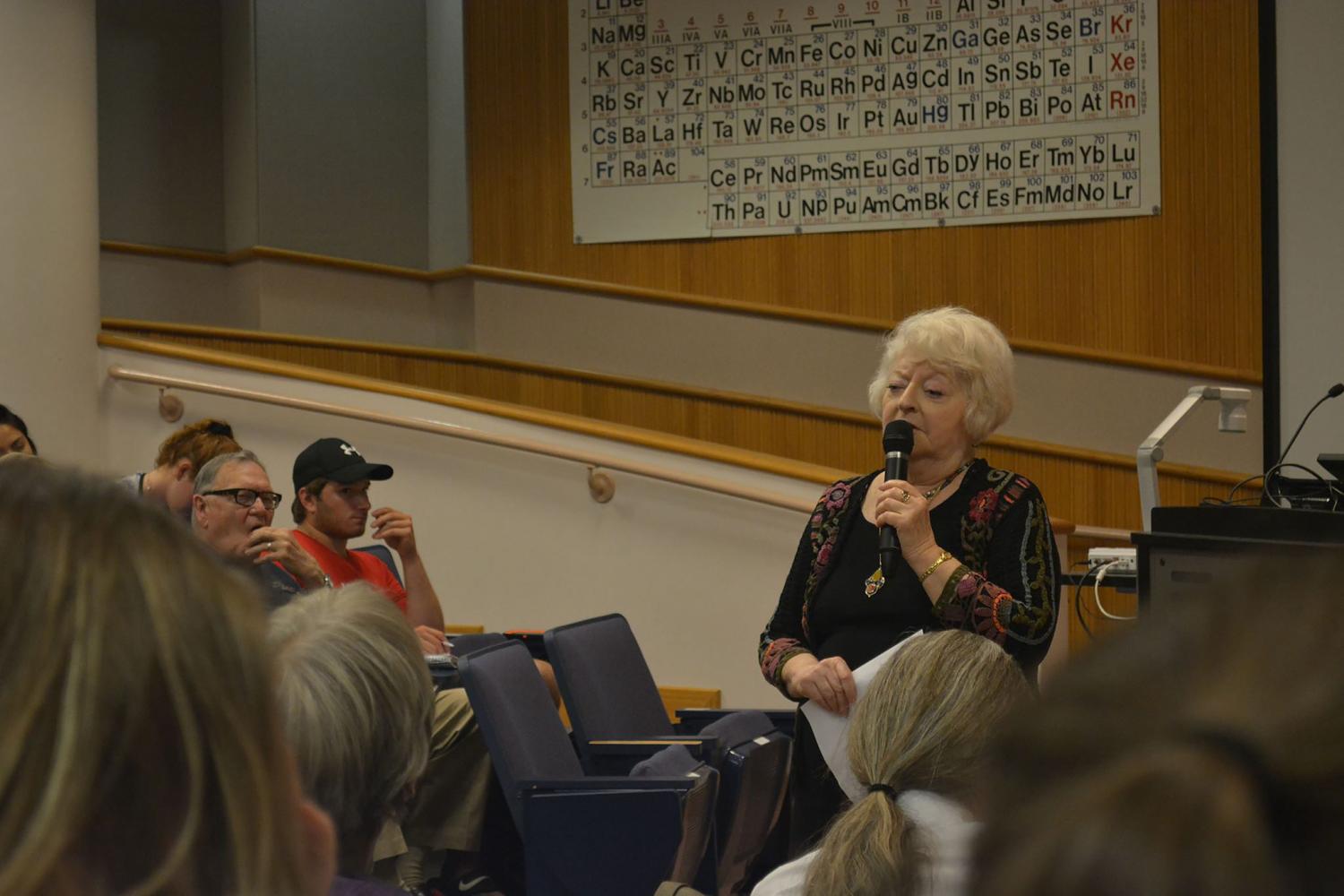 Retired Professor Rosine Tenenbaum speaks to community members and WSU students on Wednesday, Aug. 30 in Stark 103 auditorium about Nazism today and in the past.

History Department Chair Matthew Lindaman and Rosine Tenenbaum, a retired Winona State professor of French and Spanish, came together to inform Winona State students and community members about the rise of Nazism in Europe during World War II and the similar signs and characteristics it shares with the Neo-Nazi movement in the United States.

Lindaman and Tenenbaum conceptualized the lecture in the wake of the white supremacist protests and anti-fascism counter-protests in Charlottesville, Virginia on Aug. 12.

Tenenbaum, a descendant of Holocaust victims and survivors, recalled watching coverage of the protests and being prompted to contact history professor Colette Hyman to speak on the horrors of Nazism.

“I thought ‘Their parents, their grandparents died to fight against the Nazis and here they are parading with that swastika.’ That was beyond comprehension,” Tenenbaum said. “I want to tell people how the nation becomes ‘Nazified’ [and] what the sources of that phenomenon are that creates hatred and murder.”

As a historian, Lindaman said he ordinarily enjoys the ability to use the past to connect with the present, though not in the face of current demonstrations of white supremacist ideology.

“We relish when our ideas become relevant in historical news. This is not such an occasion,” Lindaman said. “This is a difficult conversation. We wish that these events would not be reoccurring.”

Tenenbaum, a French native, explained the rise of fascism in France, including their involvement in the prosecution and deportation of Jewish people during World War II.

After the invasion of France in 1871, there was a growing sense of nationalism in France, Tenenbaum said.

“After this invasion and this defeat, you have a resurgence in France of national pride—‘Let’s make France great again’—[and] the creation of hyper-nationalistic organizations,” Tenenbaum said.

In June 1940, while Germany was steadily gaining power, French General Philippe Pètain was appointed Chief of the French State, a new government heavily influenced by the ideology of Adolf Hitler and the Nazi party.

“Even the Germans were disgusted. That was a French specialty—to denounce your neighbor, to denounce the mother-in-law of your cousin, or whatever. It was just horrible,” Tenenbaum said.

In July 1942, 13,000 French publicly denounced Jews, including over 4,000 children, living in Paris were rounded up and put in the Vélodrome d’Hiver—an indoor bicycling arena used in the winter—without water, food or sanitary facilities for five days.

This event is now known as the Rafle du Vel’ d’Hiv or the Vel’ d’Hiv Roundup.

“At the end of the road, for days and days and days, you would be arriving in Auschwitz. Those who were too weak to work—children and old people—immediately were taken to the gas shower,” Tenenbaum said.

Out of 76,000 Jews who were deported from France during World War II, only 2,500 returned after the war concluded.

Lindaman detailed the long history of Neo-Nazism in the United States after the conclusion of World War II, starting with the founding of the American Nazi Party in 1959.

A member of the American Nazi Party named William Luther Pierce carried on the ideals of the party through the 1970s and founded the National Alliance—a white supremacist organization—in 1974.

Lindaman said the National Alliance gained popularity by appealing to those who had lost hope and felt disillusioned with their place in the country.

Both novels depict the violent extermination of groups that Pierce deemed unfit to live in the United States, including African-Americans, Jews and homosexuals.

“In the 1990s, an individual by the name of Timothy McVeigh used violence to blow up a government building in Oklahoma City,” Lindaman said. “Hundreds were killed, including dozens of children, in this act of terrorism. McVeigh had The Turner Diaries book in his car and was trying to carry out some of the ideas.”

After Pierce’s death in 2002, the National Alliance lost much of its popularity and the American Nazi movement died out until the 2008 presidential election of Barack Obama.

“We see this re-emergence of Neo-Nazi movements and one of these individuals—there are probably eight or nine others that are considered leaders—that emerged was Richard Spencer,” Lindaman said.

Spencer is known for coining the phrase “Alt-Right” to refer to a right wing movement that favors white supremacy and white nationalism in lieu of traditional conservatism.

Lindaman said the creation of a new party is a tactic that was used during World War II to present two extremes at war and devalue both political parties.

Other similarities Lindaman found included President Donald Trump’s comments on how the events in Charlottesville were caused by “both sides,” as well as his tendency to call many mainstream media outlets “lying news”—what the German Nazi party called Lügenpresse.

Lindaman said though the racial climate in the United States currently appears bleak, there is a bit of optimism to be noted.

“America today is much more diverse than 1930s Germany—many more voices that are possible to speak out,” Lindaman said.

“I think it needs to be said, although it shouldn’t need to be said: there is no place in the world for an ideology that is about hatred and bigotry and violence, and least of all, on a college campus—which is what we saw in Charlottesville, and certainly not at Winona State University,” Olson said. “There’s no room for ideologies like this and it’s through these kinds of conversations that we can make sure that we create a world here that is welcoming, hospitable [and] peaceful for all.”