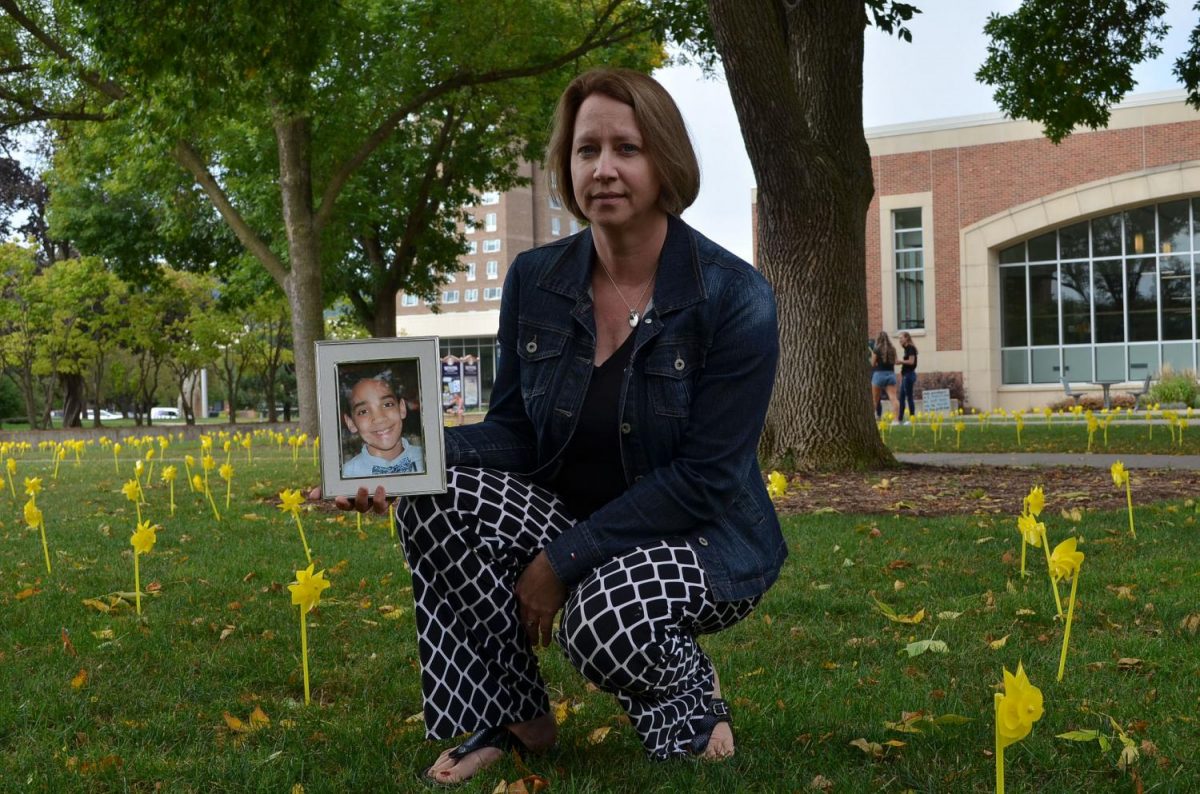 Winona State librarian Carol Daul-Elhindi and her husband founded Solomon’s Song in her youngest son’s honor after he took his life in 2016. Solomon’s Song works to promote a healthy mind and body, celebrate diversity and work to stomp out the stigma surrounding mental illness. The foundation holds several awareness events and provides resources for those who need help.

Bright and early at 6 a.m. on Thursday, Sept. 21, members of the Winona State University chapter of Active Minds began placing 1,100 yellow pinwheels all across campus, to signify the number of college students in the United States who die by suicide every year.

To raise awareness of this issue on campus for Suicide Prevention Awareness Month, Active Minds placed yellow pinwheels and signs with suicide statistics across the green space in front of Kryzsko Commons.

The president of Active Minds, Janelle DeRubeis, shared that active minds is a mental health awareness club that reaches across the country and has been on campus for several years.

The initial idea for a representation of these students came from the national level, in which there would have been 1,100 yellow backpacks on campus that day.

The club decided that a more affordable but still effective strategy would be to use pinwheels around campus. The event also included a table, where they shared more information about the club, about suicide prevention, resources on campus and in Winona, as well as stickers and buttons.

DeRubeis, a sophomore psychology major, shared what the goal of the event was and what the club hoped to share with their peers.

“[Our goal is] to just start the conversation with people. I want them to look at this and maybe come to the realization like ‘wow, mental illness isn’t something that’s really strange and weird, it’s actually super common,’” DeRubeis said. “One of the signs we put up says ‘1 in 4 college students has a diagnosable mental illness,’ which I feel is something that people don’t really know and hopefully things like that will start a conversation among the students.”

DeRubeis herself struggled with mental illness, as well as some of her close friends from home, so she has become passionate about mental illness and suicide prevention.

“I have struggled with mental illness for years now, since middle school, and a lot of friends from my hometown have struggled with depression and thoughts of suicide. When I came across this club it was something I was really passionate about,” DeRubeis said.

DeRubeis shared that important things to assure loved ones with depression or who are having suicidal thoughts is to let them know that they are not alone, that they need to ask for help and that it’s one of the biggest signs of strength, and to start talking to those around you.

Kelly Kirby, a clinical counselor from Counseling Services in the Integrated Wellness Complex, shared signs of suicidal thoughts and when to get help for someone else.

“Signs often include people talking about suicide, becoming more withdrawn, increased substance use, giving away of possessions, hopelessness, intense emotional pain and feeling trapped,” Kirby said. “If they are thinking about it, ask them if they have a plan. If they have a plan, then it’s important to get them professional help.”

Some of the most common warning signs in people who are contemplating suicide are similar to the warning signs of depression, according to clinical counselor Eunie Alsaker.

“The first thing is to be aware of the warning signs and watch for them,” Alsaker said. “I think the second piece is to have a conversation with someone you care about if you see red flags or risk factors.”

When someone is having a conversation with another about possible suicidal thoughts, Alsaker said it could be helpful to first address what they have observed or heard.

“For example, ‘I’ve noticed that recently you’ve been sleeping a lot, you’ve been crying a lot, you don’t seem like yourself, I’ve heard you recently say that things feel really hopeless,’” Alsaker said. “Start with what you observe or what you hear and then move into, ‘And I’m concerned about you. I care about you and I’m wondering what’s going on or I’m wondering if everything’s okay.’ And then listen.”

Most people who are struggling with suicidal thoughts are more likely to discuss it with friends and family rather than counselors or therapists, Alsaker said, though many people do not want to talk about suicide.

“A lot of times people are hesitant to ask about suicide because they fear they are putting the thought in their friend’s mind. That’s not the case,” Alsaker said. “[I] encourage friends to ask the question directly: ‘Do you have thoughts of suicide? Do you have thoughts of taking your life?’ It’s the opportunity to have a very honest conversation. You’re not planting the seed.”

According to NAMI, approximately 16 million Americans experienced a depressive episode within the past year, though librarian Carol Daul-Elhindi believes depression and other mental illnesses are still heavily stigmatized.

Daul-Elhindi lost her 14-year-old son, Solomon, to suicide in January 2016.

“It seems like every time there’s a barrier or a problem, the root cause of it is the stigma that surrounds mental health,” Daul-Elhindi said. “That was really one of the things when our son was not doing well—he didn’t want anybody to know. He was embarrassed and he thought he was the only one.”

In April 2016, Daul-Elhindi and her husband Mohamed founded Solomon’s Song, a non-profit organization focused on teen mental health and diversity.

“[The mission is] to stomp out stigma and to promote healthy mind and body, so being preventative and proactive in our healthcare, and to celebrate diversity, which is something that Solomon was a big proponent of,” Daul-Elhindi said.

Solomon’s Song offers educational mental health and diversity programs, including a road to resiliency program that starts in October. Though the programs are geared towards teens and young adults, most activities and events held are open to those of all ages.

“We really want to be able to help normalize conversations around mental health,” Daul-Elhindi said. “If you can talk about cancer, diabetes or anything else, you should be able to talk about your mental health just the same without fear of losing your job or being judged.”

Daul-Elhindi said the most important way to support those struggling with mental illness or contemplating suicide is being able to share their thoughts and feelings.

“When we have to be quiet about it because we’re embarrassed or it’s shameful, then that just leads to more issues because people aren’t willing to go and get help when they need to,” Daul-Elhindi said. “But I would highly encourage them to get help. I would let them know that they’re not alone, that people are out there to support and help them find the resources they need.”

Kirby shared the resources that we have on campus and who students can talk to. These include Counseling Services, which has walk-in and crisis appointments every day during the week from 9 a.m. to 3 p.m., online resources on the Winona State University website, which includes the National Suicide Prevention Hotline; 1-800-273-8255.

“The important thing is to tell someone what is happening,” Kirby said.