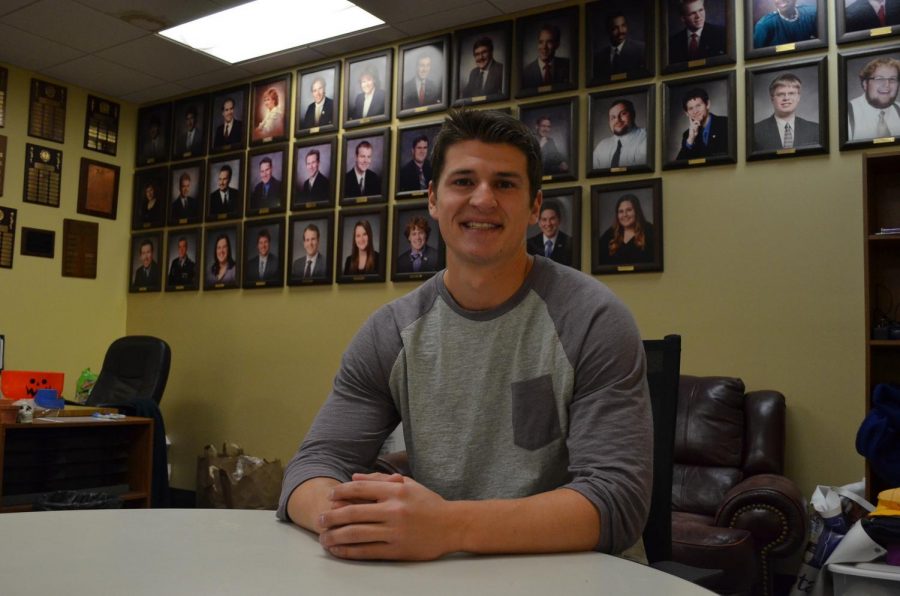 Senior student senator Carter McCauley sits in the senate office, he is one of the college of science representatives and the interim chair for student services.

Carter McCauley, a college of science and engineering senator, won Student Senator of the Week due to the amount of work he has put into the senate this semester.

Student Senator of the Week is chosen by Student Senate’s public relations representative, Jacqueline Florillo. According to Ben Reimler, Student Senate President, she chooses someone who has put in a lot of input at that meeting or has brought forth a project for senate to work on.

“Carter has really demonstrated throughout his time on senate this semester that he is always willing to step up and fill a leadership position,” Reimler said. “He is willing to go above and beyond for students, which is why we are all here.”

McCauley is not only one of the college of science and engineering senators, but he took on interim chair of student services when the previous chair stepped down.

“I knew a lot about [the committee], so they just asked me to step in for her,” McCauley said.

McCauley said that the person who held the position before him is the one who persuaded him to run for senate in the first place.

Now, McCauley likes to interact with students he would have otherwise not met, be a part of major decisions and learn more about the Winona State campus.

McCauley is working on a mentorship program currently. He hopes that upperclassman pre-med students will mentor underclassman students who are also looking to be pre-med.

According to Reimler, the program should be up and running for next semester.

“[He] always takes that extra step and is able to balance a lot of different activities that he has going on, which is really impressive,” Reimler said.

McCauley is majoring in cellular and molecular biology with a pre-med focus, with a minor in biochemistry.

After McCauley graduates in December, he will be going to medical school for the next four years. Then he hopes to be in his residency after that. McCauley shared how student senate will help him stand out.

what senate is going to prepare me for.”

In his free time, he likes to hang out with friends, work out and binge watch “How I Met Your Mother” and “Limitless” on Netflix. He is also a “brewisto” at Blooming Grounds.

“I have been working there for the past year,” McCauley said. “So, I can make a mean latte.”

“From the moment that you meet him he is very humble and very down to earth. He is someone who is always willing to listen and works really hard for student interest,” Reimler said.