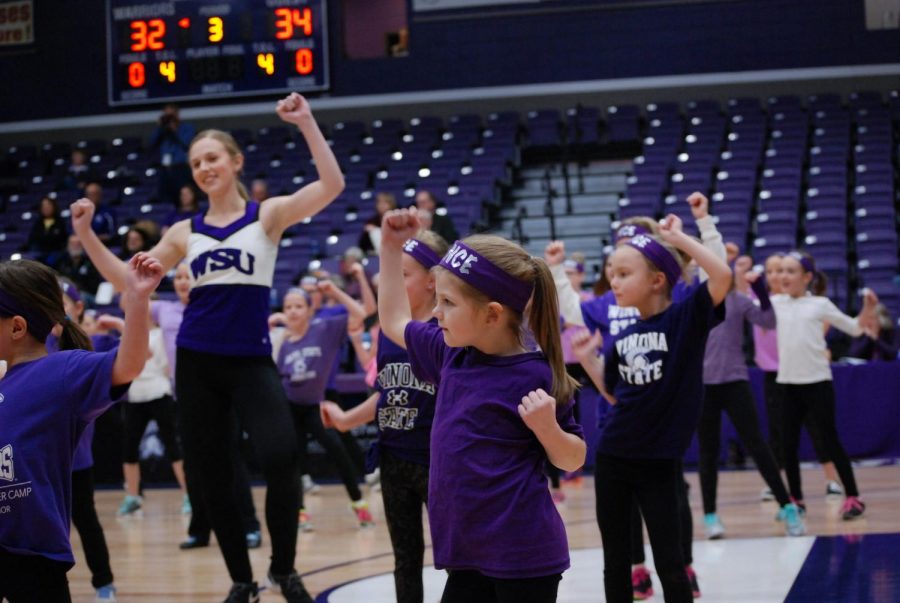 Members of the kid's dance clinic perform alongside the Winona State University Dance Team during halftime of the Winona State women's basketball game on Saturday, Feb. 3 in McCown Gymnasium.

The national award-winning Winona State University Dance Team hosted a kids’ clinic for students in grades K-8 on Saturday, Feb. 3 from 12:30-4:30 p.m. in Talbot Gymnasium. Participants learned dance skills and techniques in a routine that they performed at halftime during Winona State women’s basketball game at 4 p.m. that day.

While in years past they have only allowed kindergarten through fifth grade students to participate, this year they allowed students through eighth grade to increase number of participants in the event. This year, approximately 100 girls signed up to participate.

At the game, they were led out in lines of 5, and kneeled on the ground, waiting to start. They then danced to Demi Lovato’s “Sorry Not Sorry” while surrounded and led by the dance team.

“We do this because we think it’s important for the girls to get this experience,” Hamby said. “The chance to perform at a game is something fun and exciting for them to do.”

This year’s Winona State Dance team consists of 12 members, led by sophomores, Captain Jordan Brausen and Associate Captain Kiana Thompson. Considered a club sport, the team is a part of all home football and basketball half time performances. They also perform sideline routines at all home football games. The team also dances at all school related pep-fests and other events around campus.

The dance team, along with the cheer team, officially represents Winona State University at events around the state and competes at regional competitions in Minnesota and Wisconsin.

“The girls are smiling a lot during practice and I think they’re having a lot of fun,” Hamby said. “I think it’s fun for them to meet other girls their age and they seem so excited to perform at the game tonight.”

No dance experience was required to participate. It cost $20 for the participants, which included a light snack and a headband. Family members could then purchase reduced-price tickets at the athletics ticket booth outside McCown Gymnasium the day of the game to watch their student perform. Participants were required to wear black pants and a purple or white plain top that is easy to move in, dance shoes or sneakers, and a water bottle.

To be involved in future events, stay tuned to the Winona State Dance Team Facebook page.