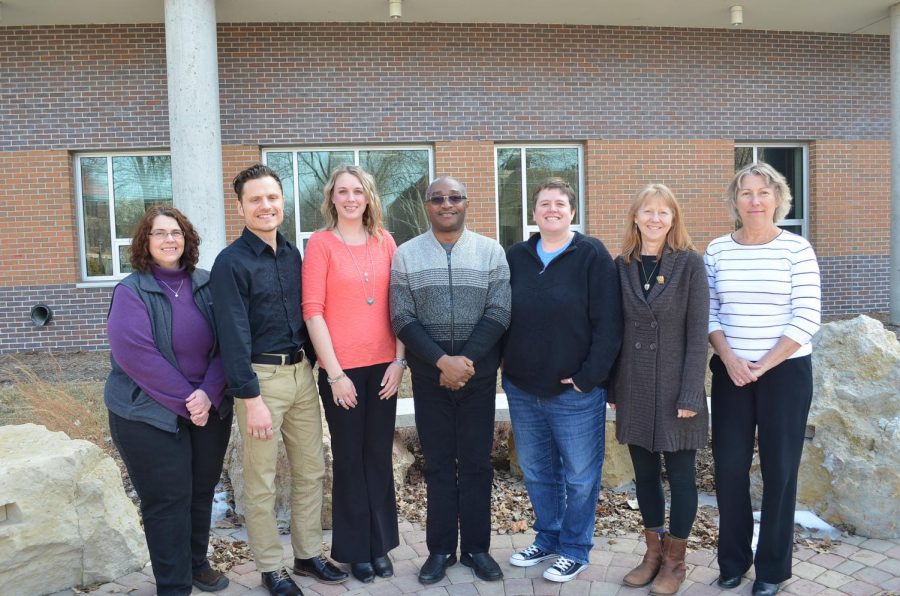 The Winona State counseling staff from left to right: Lynda Brzezinski, Mick Lynch, Kateri Johnson, Benedict Ogum Ezeoke, Eunie Alsaker and Debbie Dickenson. Last Wednesday, March 14, Student Senate voted in approval of an 18 percent hike of the student wellness fee in order to hire a new counselor. The hope is that this will help reduce the two-week wait time and provide students with another counselor to speak to.

On Wednesday, March 14, Student Senate passed the raise in the students’ Wellness Fee increase to hire another counselor in Counseling Services.

Every year, different departments request fee increases to maintain the overall needs of campus, which includes building updates and student needs. This process begins with Student Fee Management Committee (SFMC), which is made up of students and faculty.

The SFMC is where each of the departments and those asking for fees present the increases, sharing what needs to be done and giving the committee options of what can be provided and what they would like to see in the future. The committee asks questions and then discusses it amongst themselves. The fee increase is then tabled for a week where the members go and ask their constituents about what they think and come back the following week to vote on it. Then the motion goes to Student Senate, who discuss it at a meeting, table it for a week to talk to others and receive feedback and vote on it the following week.

After all the fee decisions have been made, Student Senate President Ben Reimler writes a recommendation to send to President Scott Olson to make the final decisions on the budget.

Reimler shared what the SFMC does and how that relates to Student Senate.

“The recommendation works its way through SFMC, which I think leads to this misconception that Student Senate is the only thing involved in this decision and that we don’t solicit student input and we don’t hear from students. We have non-student senate representation on the SFMC committee…to have the perspective of just a traditional, ordinary student, and that’s really important,” Reimler said. “How this is going to impact their life, is this going to make their experience at Winona State University better, and that’s what we overwhelmingly heard.”

Christina Melecio, the Student Senate Treasurer and chair of SFMC, explained how the fee increase or decrease process takes time and the importance of that time.

“The fees that happen don’t happen very lightly, they do take quite a bit of time…The entire process takes about a month long,” Melecio said. “We have input, but ultimately it’s hoping that [those making the final decisions] listen to the students.”

The recommendation for the wellness fee increase and the addition of a counselor came from Vice President for Student Enrollment Management and Student Life Denise McDowell. McDowell discussed with students on campus and the counselors in the Counseling and Wellness Center, and heard that another counselor would be beneficial to students and that counselors would like to help more students and be able to see those that need help more often.

“I was able, with counseling, to present a proposal, that said to the students ‘if you will help with this, I promise to you that we will provide additional mental health services,’” McDowell said.

After presented with this proposal, senators  talked to other students, whether it was their friends or their colleagues in their classes and overall got a majority of students that thought that this increase would be beneficial on campus and for students.

Vice President Chris Latzig shared that he has friends that are unable to utilize this service on campus and that they can not due to the little availability that they have and expressed that this is important to all students.

“Part of the fee increase would obviously be going towards hiring another counselor in hopes to take a step to meet the demand of the students. It’s not a fee that’s going towards administration, it’s not a fee that’s going to add on another track on top of the building. It’s actually going to students for students for what they want, which is really important about why the fee is such a large increase as well,” Latzig said.

Sophomore student representative Ben Ellgen agreed that it was beneficial for other senators to poll in their classes and find what the students actually thought of this change, but that the personal stories of students is equally as important.

“I think there is value in having a number, I think especially with counseling and wellness services, I think some of these stories are very valuable in understanding, and how stories of individuals not being able to access the services they deserve, how that adversely affected them, and so I think looking at these stories is very important to do as well and see to what degree were individuals affected,” Ellgen said.

One story that has taken part on campus and in counseling services comes from Abby Van Den Berg, a junior psychology major. Van Den Berg began going to counseling services last semester and since then has met with a doctor and received medication for her mental health. She shares her struggles for this semester being unable to go to her counselor, Kelly Kirby, as often as she needs to.

“I feel that I need more appointments with my counselor, especially now that I’m taking medication for my mental health, I feel that I should be increasing my counseling, but honestly, I haven’t gone yet this semester because I have been trying to find someone in the area that I can meet with more frequently, but it’s been really hard,” Van Den Berg said. “I wanted to leave Kelly open to other people who need help because I feel better with my medication but I’m sure that there are people that aren’t on medication that should be and they need a counselor.”

Van Den Berg expressed how she felt that working with Kirby and being in counseling services have benefitted her mentally and emotionally and that this is an important service that should be utilized, and that while this is an unusually large increase, it is important to campus.

“I feel like a lot of people are moaning and groaning about the price increase but it’s not that much. They probably won’t even notice it and it’s going to help the campus overall and the Integrated Wellness Complex overall and I just say why not,” Van Den Berg said. “For me personally, and I’m sure for other students, one-third of the students have some sort of mental problem and they probably need a counselor and if so much of the population on campus needs something like this, why wouldn’t this be an automatic yes.”

The wellness fee will increase by 18 percent, or approximate $27, for students to support a new counselor and other needs throughout the Integrated Wellness Complex (IWC). About seven dollars per year will be going to the building of the IWC and any other necessary changes and 20 dollars per year will be going to a new counselor. Melecio shares how she views this increase to students’ fees.

“While it sounds like a lot because it’s 18 percent, in the end for the next four years, it’s only 20 dollars a year, it’s only 80 dollars of my entire fees that will be going to getting a new counselor to be able to benefit so many students on campus,” Melecio said. “I spend 80 dollars on a concert ticket and I have no problem; what’s 80 dollars to help someone else be able to use something that’s so important to them to be able to function daily.”

McDowell shared that she established the increase of the fee for her presentation by the SFMC, by determining how much it would cost to support another counselor on campus, how students wouldn’t need to be asked later for more money to support it, and make it small enough that it would be effective, but not overwhelming to students.

Reimler shared a thought that was expressed by Student Representative Connor Taylor at Wednesday night’s meeting, that he thought was significant, which McDowell echoed.

“When we have students that are struggling with mental health, even if you don’t personally struggle with mental health, that brings down the morale of campus. If we can provide each and every student an opportunity to succeed, we’re all going to be better because of that,” Reimler said.

Reimler and Latzig also emphasized that even though you may not personally struggle with mental health, there are people you know that do and this fee increase and this additional counselor can benefit and help all students on campus.

McDowell shared her final thoughts on the proposal and what her role will be moving forward.

“I’m excited that the students felt as if this was an investment not only in the present, but in the future. When we think about doing something for those that we may not benefit from it, then I’m really investing in paying it forward in some ways,” McDowell said. “Part of my commitment is that we honor the promise, monitor the process, and I’ll be working closely with Dean Johnson and the director of counseling to make sure that we provide students with the best possible wellness service that we can, with the resources that we have.”