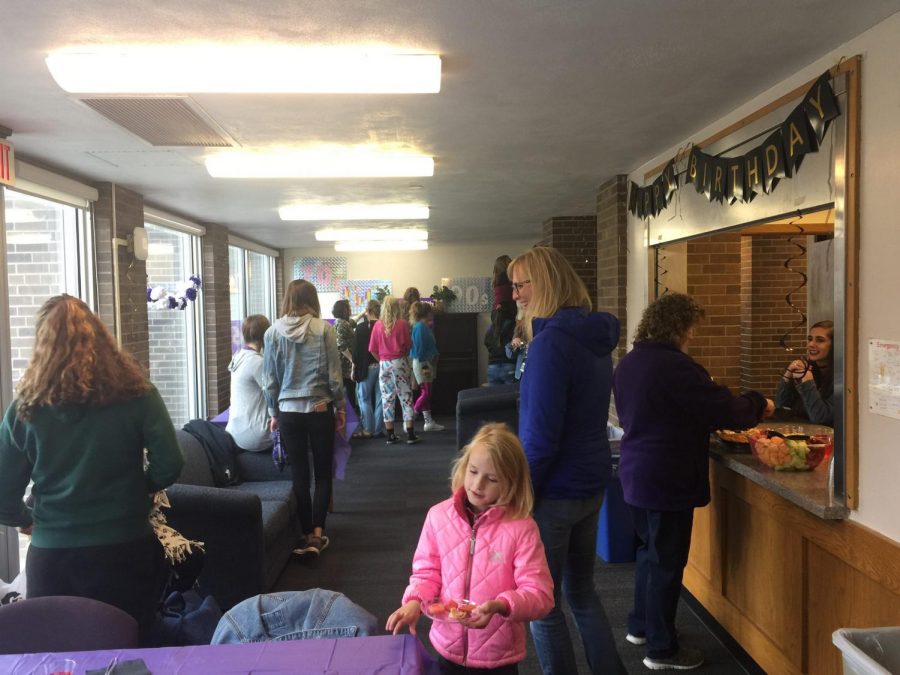 Alumni and current residents of Sheehan Hall gather in the first floor lounge for food and cake to celebrate the resident hall's 50th anniversary.

Sheehan Hall – one of Winona State University’s on-campus dormitories – celebrated its 50th anniversary with a through-the-decades style bash on Saturday, Oct. 6. A feature in this year’s homecoming week festivities, the celebration was open to all, but specifically for the students, resident assistants, staff and alumni of the dorm from 11 a.m.-1 p.m.

The 2017-2018 school year marked the official 50th anniversary of the Sheehan Hall grand opening, but Housing and Residence Life decided to wait to hold the official celebration until this year’s homecoming.

After 50 years, Sheehan has made more than its fair share of memories and milestones. On one of the walls of the lounge hangs 1966 news clipping revealing a sketch of the yet-to-be-built dorm, displaying it nearly identical to how it looks now. The clipping detailed that the dorm was a $1.3 million project and would begin in late July 1966 and was planned to be finished in the fall 1967. The dorm officially opened its doors in January 1967.

Towering over campus, the 13 floor building’s residents occupied the entire first-floor back-lounge for the commemoration. Resident assistants and staff were decked out in past-decade-appropriate attire and stayed for the entirety of the celebration. The walls were embellished with Winona State colored streamers and newspaper clippings from 1966, 1968 and 1976 about the hall, as well as having one separate area decorated from floor to ceiling as a backdrop for people to take photos in front of.

Upon entering the building, people were greeted by RAs who set up a table in the lobby for face-painting that continued through the entire event. The back lounge, decorated to fit the occasion, had marble cake, crackers and a meat and cheese platter, punch and soda, as well as dozens of Sheehan-themed pins to choose from and take after attending the bash.

The 2018-2019 school year brought in enough girls to fill up eleven of the floors of Sheehan Hall and with it many new friendships and opportunities. Every floor has a resident assistant available for the residents to go to for help with roommate issues, advice on school and just about anything else. This connection is crucial to the community that Sheehan builds.

RAs hold events to create communities on their specific floor too, explained by first-year resident and biology major, Diana Zargarian.

“It’s really cool that [residents] are so nice to each other and are able to go to the little events we do on our floor together even if we aren’t really close yet,” Zargarian said. “I haven’t been to every event, but there are enough that you know there’ll be another one soon.”

“It’s really welcoming and pleasant. I feel very comfortable around everyone and we all have a good time,” Zargarian said.

The other residents she attended the celebration with also agreed with her on the easy-going community of the dorm.

The 50th celebration came at a perfect time, for the long-standing dorm is coming up on some massive changes for the following school year.

The hall has traditionally been an all-female dormitory and a favorite for incoming freshman, adorned with two lounges on the first floor that have TVs, as well as a large laundry room in the basement, kitchenettes and furnished lounges on levels two through 13, two bathrooms on each end of every level (with new gender-inclusive bathroom policies) as well as heating for the cooler fall and winter months. Students can occupy either single, double or extra-large rooming with approximately 400 females filling up the building. Every room comes with a desk and chair, and beds that can be lofted upon request.

While those amenities will still be available for the foreseeable future, the 2019-2020 school year will introduce something entirely new to the dorm: male residents.

The traditionally all-female hall will be taking on a co-ed community, as explained by the Director of Housing and Residence Life Paula Scheevel.

After being asked about any other changes for the dorm, Scheevel shared another insight.

“We’re exploring the potential for air-conditioning for the whole building, but we’re still trying to determine pricing and feasibility, so it’s under study – not official,” Scheevel said.

Director of residents for Sheehan Hall, Rebecca Sims, also shared that there is a circulating idea to bring Residential Learning Communities (RLCs) to Sheehan and all other halls this upcoming year. RLCs currently exist on west campus and offer different experiences and opportunities depending on which community one would join.

With all of the upcoming changes for Sheehan Hall, the 50th celebration displayed the finest thing about the long-standing dormitory: the community the hall has created.