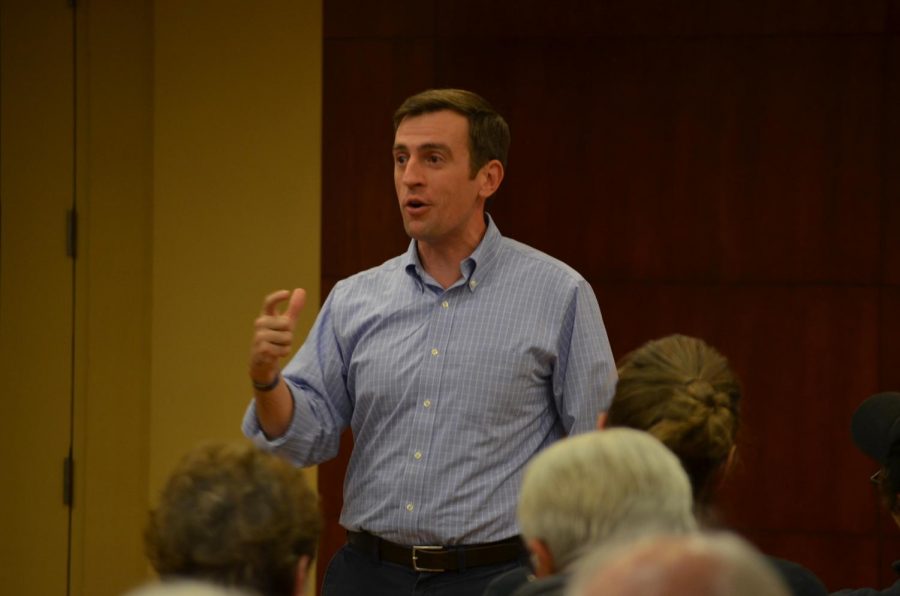 Congressional candidate Dan Feehan spoke at the Get Out the Vote Rally on Monday, Oct. 22 in the Student Activity Center. One major topic was to get out and vote. Feehan knew that the audience was voting so he challenged them to get others to join.

Minnesota’s first district candidate for Congress was at the Get Out the Vote Rally on Monday, Oct. 22.

Dan Feehan is a 36-year-old father of two, raised in Red Wing, Minnesota. Feehan is running for the Democratic Farm Labor Party.

Part of his platform is to make higher education more affordable to students and to educate high school students on their options after graduation.

Feehan also said if he were to be elected his first goal would be working on health care policy.

“I hope to be a part of broad health care reform,” Feehan said. “So that we find a way to provide affordable health care to everyone in this country.”

Though Feehan’s competitor Jim Hagedorn was not in attendance at the rally the two had a debate on Friday, Oct. 12 that included this topic.

Hagedorn looks to replace Obamacare with free-market healthcare, which means that the government could not intervene. This could lead to differences in pricing for the same healthcare procedure.

Many students, faculty, staff and locals attended the rally. There were people there of all ages.

Marie Holmqist and Anne Morse, two attendants of the rally, were there to support Feehan because they support his stance on gun control.

“He is a gun sense candidate, which means he supports gun control legislation,” said Holmqist.

Morse, who is a part of a local group called Moms Demand Action, agreed that Feehan’s stance on gun control is why she attended the rally.

Morse said that there is “no threat” to the Second Amendment if a criminal background check is done and “red-flag” laws are introduced.

Red-flag laws refer to laws that would allow family members and police officers to petition the court in order to now allow a person the ability to buy or own a gun.

Both the background checks and red-flag laws are being used in other states.

According to interviews with Feehan, he agrees that it is time for reform in the form of background checks.

Hagedorn has said in previous interviews that he supports arming teachers. He also said that it would make sense to enforce gun laws.

Another goal of Feehan’s is to be someone who will work with anyone.

“Congress is a very broken place right now because it is a very partisan place and is full of people unwilling to work with each other,” Feehan said. “If I can evoke something different in that regard that is a goal as well.”

Through Feehan’s speech on Monday night he emphasized the importance of going out and voting. He said that no matter if someone votes or not, someone else will be representing that non-voter.

“Your voice is going to be represented whether you vote or not,” Feehan said. “People are going to continue to make decision on your behalf even if you don’t vote.”