Warriors hold off the Mustangs at home 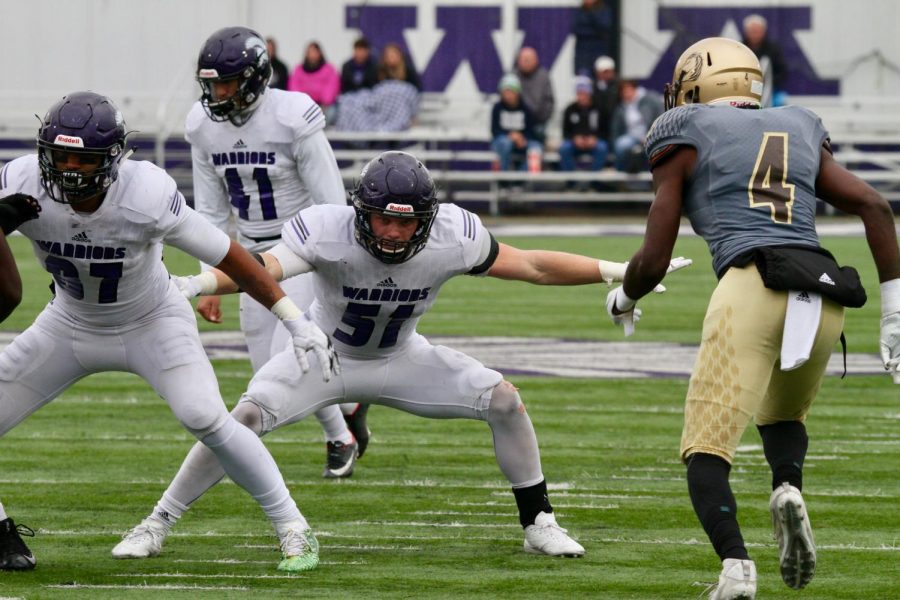 Winona State, coming off a loss against the University of

Minnesota-Duluth, started the game on a positive note after sophomore Isaiah Hall would give the Warriors great field position on the opening kickoff taking it 43 yards to the Mustangs 43-yard line. The offense capitalized on the field position as sophomore quarterback Owen Burke would find first-year tight end Jaylen Schleicher, who was left wide open for 18-yard touchdown for the first points of the game.

On defense, the Warriors forced a punt after getting a sack on third.

After both teams traded punts, Winona would kick a long field goal making the score 10-0.

On the ensuing defensive drive, the Warriors would come up big again, forcing another three-and-out.

Following the punt, Burke would complete a 43-yard pass caught by junior receiver Connor Schulz bringing them into the Mustangs territory. Later on in the drive, the Warriors would have shot at 44-yard field goal, but instead went for it on fourth down. The attempt would be unsuccessful thus giving the Mustangs the ball.

The defense would hold them again on the following drive after a sack on third down.

Winona would get the ball back, and catches by Schleicher and Schulz would set up a 50-yard field goal by Paul Ortiz.

On defense the Warriors would come away with a turnover forcing a fumble on a sack, and on the ensuing drive get another field goal pushing the lead to 16-0 at halftime.

After leading a shutout in the first half, the defense would allow its first score, after the Mustangs would capitalize on a 32-yard pass play and would get a two-point conversion in the process, making it a one possession game with the Warriors up 16-8.

Burke would lose a fumble on the next play from scrimmage. Southwest Minnesota State would then score again on a two-yard run. They would go for two again and they would convert to tie the game.

The fourth quarter would start with punt by the Mustangs. On the ensuing drive would end in a field goal to take the lead. The defense would force another punt and Hall would take it 38-yards into the Mustangs territory.

The offense would follow this up with a touchdown by senior receiver Isaiah Frandsen to extend the lead to 25-16 after a missed extra point.

Southwest Minnesota State would answer back with a field goal, but Winona’s offense would keep the momentum scoring after a 20 and a 22-yard run by sophomore running Sam Santiago-Lloyd setting up another touchdown catch by Frandsen.

On defense, Hall would come up with another big play, this time scoring on a pick-six.

This would secure the win but the Mustangs would score again making the final score 38-26.

The Warriors will go on the road next week to Augustana University. Kickoff is set for 1 p.m. on Saturday, Nov. 3.