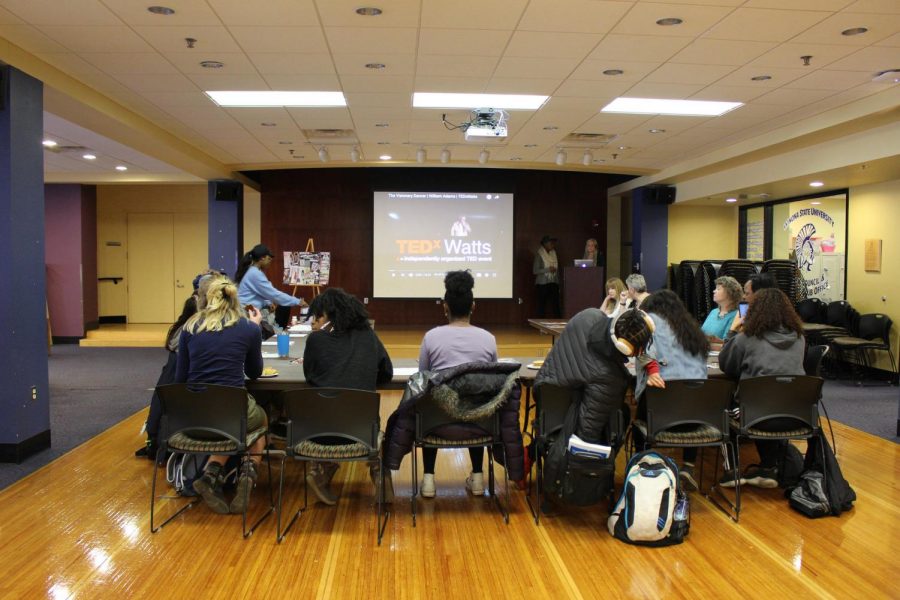 Each month at Winona State University, the Office of the Vice President for Enrollment Management, Student Life and Student Senate work with a co-facilitator from Winona State to put on a TED Talk about an idea worth spreading for students and faculty to attend.

These TED Talks are put on to help give a Winona State student the chance to share their ideas and lead the talk and discussion.

This month’s TED Talk “Live Your Dream Life,” was co-facilitated by Nathel Kaiyeepu, a senior at Winona State.

Two days before Kaiyeepu’s TED Talk, she changed her major to individualized studies, so she could follow her dreams. Prior to her major change Kaiyeepu was majoring in mass communication: journalism.

“I realized I wasn’t happy in my major and I was thinking about dropping out of school two weeks ago. Now I have a new major and I’m happy again,” Kaiyeepu said. “Chasing your dreams is not easy and nobody will ever tell you that it is. But in the end, it is so worth it.”

“Our office began TED Talk Tuesdays in the Fall of 2016 and we have been doing them ever since,” Riedel said. “It was an idea started by alumni Amanda Brown with the vision to get students involved in meaningful conversations on campus. I took over the event this semester and I have been training our new student, Angel Tarwoe, who will take over next semester.”

Riedel helps host the TED Talk Tuesdays and gets the word out to campus clubs, and others who might be interested in co-hosting a TED Talk.

“The main goal of these TED Talks is to find a topic that connects with current events and/or our students. We want to create meaningful discussions to promote critical thinking about the topic at hand,” Riedel said.

Kaiyeepu got involved through friends encouraging her to give a TED Talk and to share her ideas.

“My friend and I are always talking about our dreams, but we never go anywhere from there, so she encouraged me to take it further and share my ideas with more people” Kaiyeepu said. “At first it was just an idea but then it started to become more real and it was so easy to do because I am so passionate about this stuff. I could have stood up there for hours and talked if everyone let me.”

“This talk was stepping so far out of my comfort zone, so this was huge for me. I realized I have to be what I preach though, so it wasn’t that bad,” Kaiyeepu said. “I have learned so much this and decided that as long as I speak the truth from my heart everything would be okay.”

After the TED Talk Kaiyeepu facilitated a discussion about living your dream life and shared some of her words of encouragement and passions.

“I wanted it to be a conversation, I love to talk so I wanted it to be a safe space where people could say what they wanted and say what their dreams are,” Kaiyeepu said. “I am all about living your dreams, so I wanted to encourage people to turn your passions into your career and turn your bucket list into your life, don’t wait until you’re old.”

All of the dates for TED Talk Tuesdays will be posted on the Winona State Events page online. The Office of the Vice President for Enrollment Management, Student Life and Student Senate encourage individual students or clubs to look into presenting a TED Talk of their own.

“Over the course of the next few semesters we really hope to expand the event to a greater population of students on this campus. These events are fun and provide students to speak from their own experiences.” Riedel said.