Birth looks back at his time in Winona 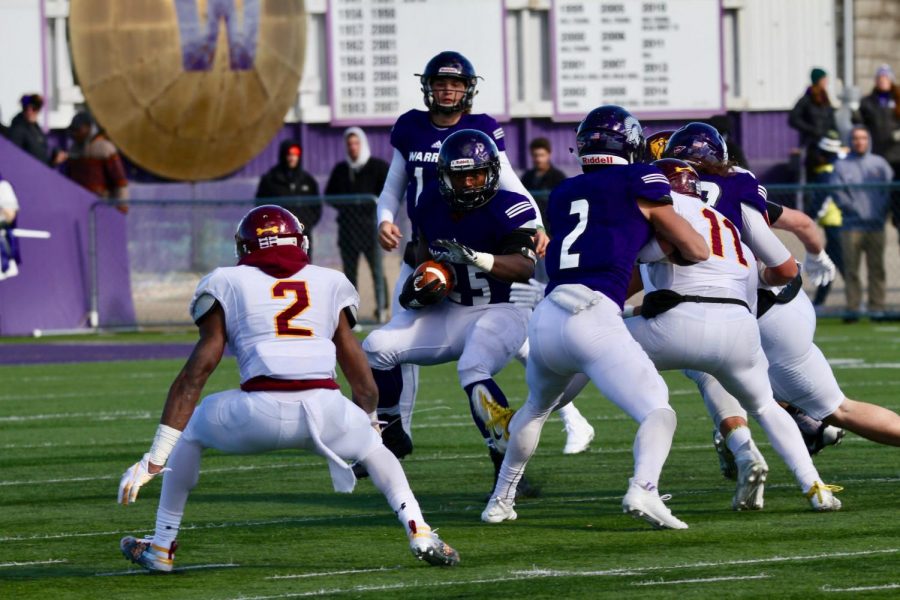 Senior running back Eric Birth attempts to weave around players from the University of Minnesota Duluth on Oct. 20 at Altra Federal Credit Union Stadium, Birth has played for Winona State all four years and chose to remain in his hometown for college.

College for most people means a lot of new things, especially new surroundings, but for Winona State University senior Eric Birth, his surroundings have stayed the same.

Being from Winona, he made a choice to stay in his hometown for college.

With the final game as a Warrior having been this past Saturday, Birth says that he is “very excited” though it would be an emotional moment for him.

“I’m sure at the game I’ll be crying,” Birth said.

Birth has been playing football since 7th grade with his last game for the Warriors coming this past weekend, after which he turns his attention on his additional schooling.

When he first started playing running back, Birth said his idol was former Super Bowl champion Reggie Bush, a player he has modeled in his own playing style, admiring his ability to use his speed to get past defenders.

Birth noted that his style has changed because he slowed down and uses his strength to run over opponents, something that was displayed on his 33-yard touchdown run last week that closed the win against Augustana.

“I still don’t understand to this day how I even got into the end zone,” Birth said when describing the moment.

Being the veteran of the backfield, Birth plays a big role, even between plays he does his part to help the team.

“I will explain what happened so the next play they can go in and do better on that play. So that’s kind of like where I feel like my role fits in it,” Birth said.

Birth’s fellow running backs joke with him that he is “touchdown hungry” because in the red zone he comes in.

Football has not always been a positive expiernce though, as injuries have impacted Birth a lot in his career. In total, he said he has had seven surgeries, one of which was on his shoulder. e.

Though it has made things difficult for him and he has even had thoughts that it might stop him from playing this year.

With his playing career coming to an end, Birth looks to become a football coach or a gym teacher and currently double majors in physical education and health, as well as double minoring in coaching and developmental/adaptive physical education. Birth even noted an interest in coaching fellow running backs.

Looking back at his four years as a Warrior Birth sees the improvement he’s made. Birth said his first year was fun, but the team didn’t win as much and, in his second-year, weight was a problem, but he noted his third year was when a big change occurred.

“I completely switched up my whole mentality. I started working out more and started eating healthier then started running more. I started watching a lot more film trying to be the best running back I could be,” Birth said.

This helped him stay a key part of the Warriors offense.

Birth ended his career as a Warrior with 39 yards rushing on seven attempts during Saturday’s season-finale against Concordia University.