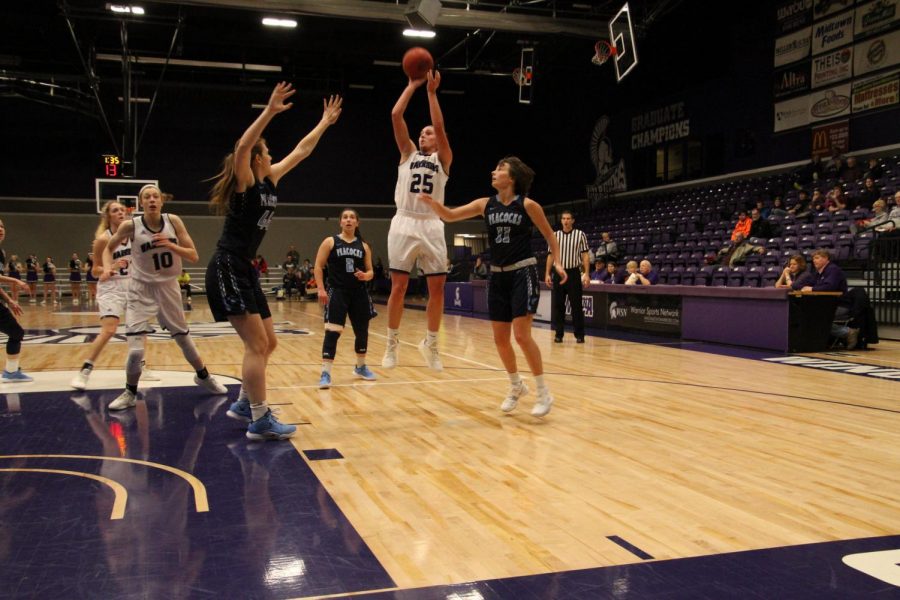 Senior Kayla Shaefer makes a jump shot while being covered by three players from Upper Iowa University during Saturday, Dec. 1’s game in McCown Gymnasium. The Warriors finished the game with a winning score of 74-48 bringing their season record to three wins and two losses.

In preparation for the game, head coach Scott Ballard spent time getting the team ready to face Upper Iowa’s defense.

“We are preparing to play against zone defense most of the time versus Upper Iowa,” Ballard said. “We put an emphasis on offense with good player and ball movement, and pressure defense to create some turnovers and transition opportunities.”

This preparation proved to be successful as the Warriors came away with a 74-48 win against the Peacocks.

With a back and forth start to the game, Upper Iowa’s Natalie Dinius had their first nine points with her only three three-pointers of the game, but for the remainder of the contest Winona State’s defense only allowed three more from beyond the arc.

“After she hit three quick three’s she got our attention,” Ballard said. “We played her tighter and forced her to try and do something off the bounce.”

Although the Warriors had a slow start on the offense, shooting only 2/11 from three, and got into some foul trouble into the second quarter, they were able to obtain a four-point lead at the half. They did this by applying pressure on defense, denying entry passes into the post and forcing the Peacocks to 12 turnovers in the first half.

The Warriors went into the locker room only up by four points with a 28-24 lead but came out hot in the third quarter hitting three threes to start their 13-2 run against the Peacocks.

“We did a better job of getting the ball inside the second half and making the extra pass for high-low opportunities or kick outs on the perimeter for some better three point looks,” Ballard said.

The Warriors continued to lead the entire second half, outscoring the Peacocks 46-24.

“We started to get more looks closer to the basket during the second half through offensive boards and post touches against their zone,” sophomore Allie Pickrain said. “Offensive rebounds got us to the line a lot and gave us a lot of easy scores.”

Pickrain had a break-out game in her first conference start, scoring 10 of her 13 points in the second half, shooting 50 percent from the floor as well as from three-point range.

“Overall, this was a really good team effort, everyone did their job and made the right plays, so when I got the opportunity to shoot it was usually a wide-open look set up by my teammates,” Pickrain said.

Rachel Novotny started at center, was the leading scorer with 15 points, shooting 7-11 from the floor and grabbing six rebounds over the course of the game.

“As a team in the second half we were more patient on offense, which helped create easy scoring opportunities for my teammates and I. We also picked up our intensity on defense,” Novotny said.

Sophomore Emma Fee got into some foul trouble but came off the bench to shoot an efficient 4-5 from the floor with eight points in just 10 minutes of play.

“I do need to stay out of foul trouble,” Fee said. “But I love how we can come out aggressive and pressure teams on defense. This year I’ve worked on finishing and becoming more of an offensive threat in the post. It feels great to be able to help the team in any way.”

The Warriors were able to utilize the entire bench throughout the game, which seemed to aid in Coach Ballard’s game plan, enabling the players to stay fresh and continue to apply pressure on defense.

“I was pleased with how our entire bench played tonight,” Ballard said. “They gave us valuable minutes and didn’t allow our team to lose any momentum in the second half by playing good defense, rebounding, and taking care of the ball.”

Overall, the Warriors dominated the stat sheet against Upper Iowa. Although each team had the same amount of possessions, the Warriors were able to put up 25 more shot attempts, shooting 48.3 percent compared to the Peacocks 40 percent. They out rebounded the Peacocks 38-20, with a 16-4 advantage on offensive rebounds. The Warriors were able to get 19 points off of turnovers, recording a total of 23 turnovers forced for the game, with a 9-3 edge on steals.

“It was a great win to start off conference play,” Fee said. “The whole team played well, and everyone added something on offense or defense that gave us the win.”

Although the Warriors came away with the win, they struggled with three-point percentage going 8-24, only shooting 33.3 percent. Winona State also committed more fouls, allowing Upper Iowa to get 20 free throw attempts, and score 14 points from the free throw line. The Warriors however, only had 12 attempts at the free throw line scoring eight points.

“Defense and rebounding are the two main things we focus on because the offense will always come, it is also important to focus on taking care of the ball and making free throws,” senior Kayla Schaefer said.

Moving forward, the Warriors will be working on different aspects of their game, some of which they struggled with during this matchup against the Peacocks.

“Early in the season, you work on all aspects of the game till your team begins to evolve and develop its own identity and strengths,” Ballard said.

Communication is key to creating more chemistry on the court, which is something Novotny thinks the team can improve on.

“By improving this, it eliminates confusion on both sides of the court, which creates more cohesion on defense and offense,” Novotny said.

This game was a tale of two halves, with the second having a lot more energy.

“As a team we are working on coming out with high energy right away, and keeping it throughout the whole game,” Fee said.

This game was a good building block for the beginning of the season and provided some needed experience going forward.

“Every game presents its own challenges with different personnel, skill sets and style of play. No two games are exactly alike,” Ballard said. “However, we know that we will be playing against a lot of zone defense next weekend, and we gained a lot of experience and confidence tonight with our zone offense as the game progressed.”