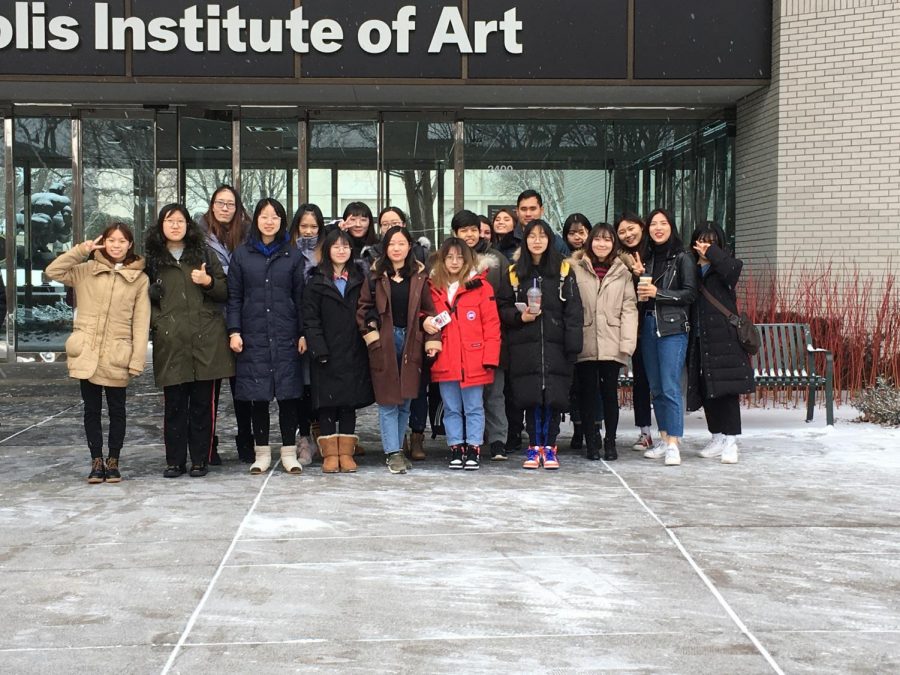 Students from Winona State University's English Language Program visit Minneapolis Institute of Art on Saturday, January 26. The group was in Minneapolis for the annual International Food and Art Festival.

Winona State University’s English Language Programs (ELP) made a daytrip to Minneapolis, Minnesota this past weekend for the group’s annual International Food and Art Excursion.

As stated on Winona State’s ELP website, “The mission of ELP is to enhance diversity and foster global fluency and engagement on Winona State’s campus.” The group does so by welcoming and supporting international students as they pursue their academic, professional and personal English language learning goals while also experiencing American culture.

One of many of the ELP’s cross-cultural events, the International Food and Art Excursion is the perfect event to embody such a message. The excursion has three locations for the day; Midtown Global Market, Minneapolis Insitute of Art and United Noodles.

Open to all ELP students, international students, Winona State students, graduate students, faculty and staff for a fee of $10, the event allowed students in the ELP program to both practice their language skills, learn about culture in the United States and bring people together from all grade-levels and backgrounds.

“It is a really great way to connect the WSU community,” trip leader and Winona State ESL academic coordinator Tim Brennan said. “Students have the opportunity to join our activities to meet new people, acclimate to the American culture, share their knowledge with others, and of course, have fun.”

The group arrived at the Midtown Global Market at 11:30 a.m. and headed inside to eat lunch, walk around to the different shops and view or participate in activities happening inside.

About half of the market was set up like the produce section of any grocery store, crates of fruit set up alongside vegetables and other foods across from an open refrigeration section of drinks. The opposite side held walkways of pop-up shops offering a look into several cultures and shopping options.

After lunch, the group made their way to the next location: the Minnesota Institute of Art.

With two hours to spend inside, students split off to different floors and exhibits to view artwork spanning near five-thousand years. Students regrouped before leaving, stopping at the coffee shop to share discussion over drinks before heading back out to the bus to the last stop: United Noodles.

United Noodles is Minnesota’s largest Asian marketplace with 15,000 feet, including foods from China, Japan, Korea, Taiwan, Singapore, Hong King, Thailand and many more places, all in one location. There are candies and drinks, ramen, meat and seafood and fresh fruit and vegetables to be picked from, all alongside the popular Unideli.

Known for “exploring flavors without borders” based off of their website, Unideli offers a look into the true flavors of recipes from Asian culture, including various kinds of ramen – a whole other experience from the usual ninety-nine cent ramen packs popular among college students.

“We can’t buy Korean food in Winona, it’s not even in Target,” the group of women said.  “If we want Korean food we have to order online or come to United Noodles.”

Wanting to connect with others is exactly what brought Metcalfe to Winona. While trying to find venues to hold tea conversations, an event where Metcalfe listens and tells stories about experiences with the Mississippi River, she contacted the Minnesota Marine Art Museum.

With the lack of culturally diverse food/access to culturally diverse food offered in both Winona and Winona State eateries, students in ELP must literally go the extra mile to get their favorites and to get ahold of ingredients to celebrate holidays like the New Year. This plays into why so many ELP students enjoy the program, as it gives them the opportunity to travel and celebrate international culture.

Throughout the trip, Brennan also had “speaking quizzes”, which got all of the students engaged with one another and practicing English, which allowed the students to practice Mlanguage while experiencing both American and international culture.

Jungin, Jeongeun, Jiyood, Hwajin and Hyojin all agreed that the best part of the English Languages Program was getting to travel on trips just like the International Food and Art Excursion.

The trip was one that ELP hosts, and although involved a trip out of Winona, there are also several events on-campus for easier access. On-campus and in-city events include upcoming events such as the Conversation Partners Night at the Alumni House on Feb. 21, hiking trips in different spots of Winona during the spring, visiting the Winona History Center, as well as joining various Winona State club events. Traveling events in the future include attending an NBA basketball game in the Minneapolis.