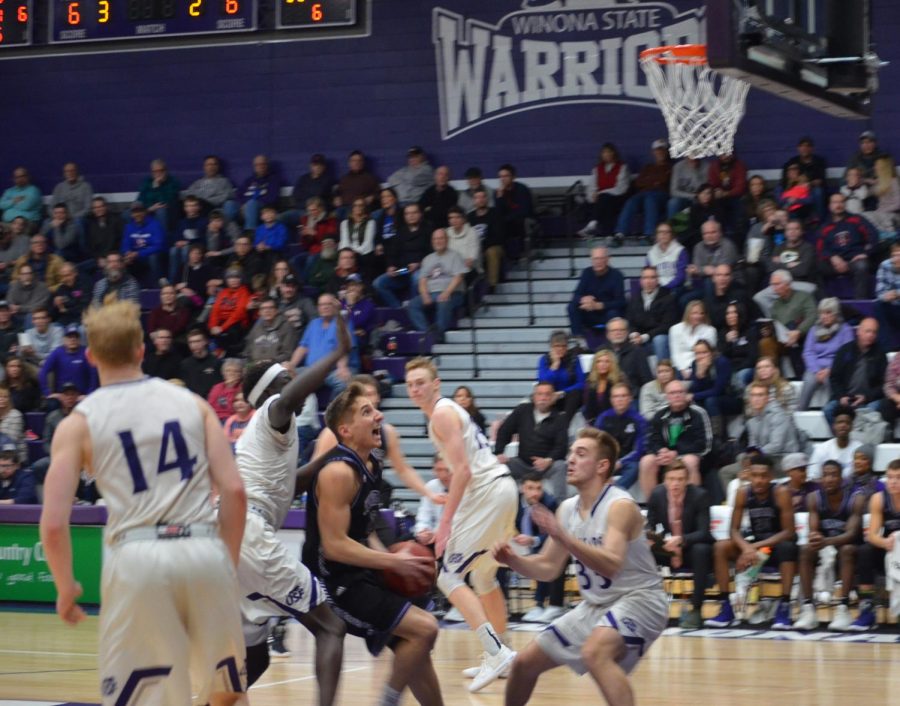 Junior guard Caleb Wagner charges toward the net in an attempt on basket during a game against the University of Sioux Falls on Saturday, Jan. 26 in McCown Gymnasium. The Warriors finished off the weekend with two wins, scoring 85-67 against Southwest Minnesota State University on Friday and 80-77 against the Cougars.

The Winona State University men’s basketball team won both of their home games over the weekend.

The Warriors started off with an 85-67 win over Southwest Minnesota State University on Friday, Jan. 25 and concluded with a 80-77 victory over University of Sioux Falls on Saturday, Jan. 26.

The game against Southwest Minnesota State had an up-tempo first half by both teams. Until there was 11:08 the Warriors trailed 23-18 and both teams went scoreless for a few possessions before Winona State’s offense picked up again. They finished the half on a 20-6 run before they went into the locker room.

This was due to the Warriors’ defense forcing the Mustangs to shoot less than 40 percent. Meanwhile, Winona State in turn shot over 50 percent from the field and outside the arc. The team also won the rebound battle 16 to 12.

Leading the way early was sophomore Kevion Taylor, who led the Warriors in points with 11 and rebounds with five at the half.

Early on in the second half, the Mustangs would hit a three to trim the lead to eight. However, the Warriors would respond immediately to increase the lead back to double-digits. At one point, Winona State got the lead to 22 on their way to the 85-67 win.

One of the keys to victory was being efficient on offense by making more than 50 percent from the field and 45 percent from beyond the arc.

The second game of the weekend against the University of Sioux Falls proved to be another fast-paced game for the Warriors.

On offense, they started off slow before three consecutive three-pointers by senior guard Mason Domask sparked the offense.

The first half consisted of multiple lead changes, however with 2:44 left the Warriors were able to bulid a 14-point lead. The Mustangs were able respond, taking a 12-0. The half ended with the score 42-40.

Domask led the Warriors in the first half with 12 points all coming from three-point attempts. They were able to hold their lead despite shooting less shots and shooting at a worse percentage. Winona State was also outrebounded 12-20. The came in three where Winona State had 10 threes compared to four by the Cougars.

The second half was the same as the first with a quick pace and multiple lead changes. With less than five minutes left in regulation, Taylor picked up his fourth foul which played a big part in the remainder of the game. Sioux Falls would look to exploit this by going at him on offense to get the sophomore to foul out. The score was tied 72-72 as Taylor hit a clutch three with 1:05 left to take the lead. On the next offensive possession, he would put the game away with two free throws before fouling out on the next possession. The Warriors would win 80-77. In addition to his late game heroics, Taylor would also record a career-high 27 points.

The next Warrior basketball will be at University of Minnesota-Duluth Friday, Feb. 1 and tip-off will be at 7:30 p.m.