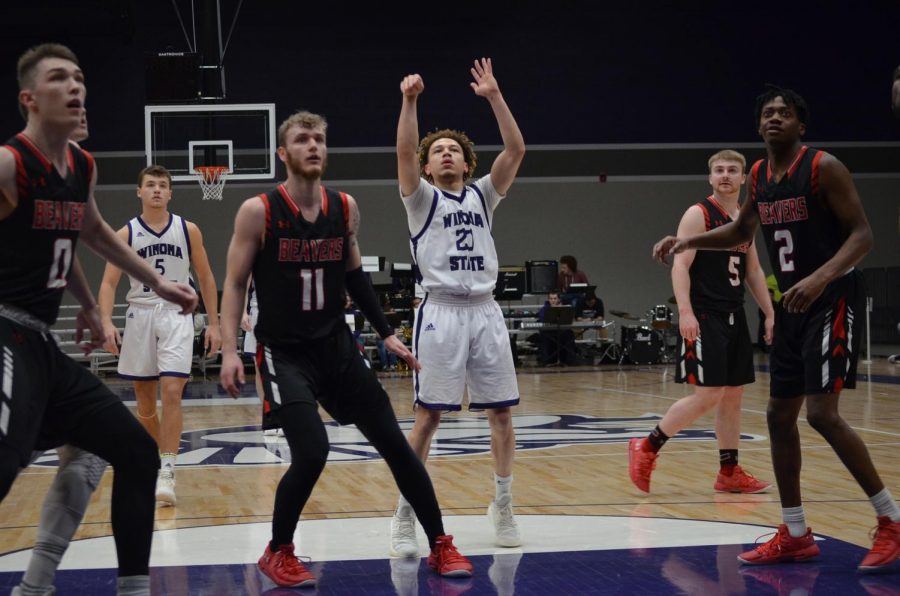 Players from Minot State University move to intercept a free-throw from sophomore Devin Whitelow on Friday, Feb. 8 in McCown Gymnasium. The Warriors lost 72-87 on Friday but came back with a win against the University of Mary scoring 84-56.

The Warriors opened up the weekend with a 72-87 loss against Minot State University, but rebounded with a big 84-56 win over the University of Mary.

Winona State started off the weekend on a fast pace, with a seven-point, unanswered run in the opening two minutes of the Friday’s game. Minot would respond right away, going on their own run to tie the game back up, before taking the lead and establishing an early eight-point lead.

After the Beavers controlled most of the first half, the Warriors would mount a comeback, taking the lead back with 6:06 left in the half. The newly found lead would not last long though, as on the next possession Minot State would take back the lead and keep it the remainder of the half, heading into the break up 46-43.

The Warriors were outrebounded 10 to 18 in the first half. The team hit five of 14 from beyond the arc, where the Beavers connected on five of their eight attempts. Junior guard Caleb Wagner led the Warriors in scoring in the opening 20 minutes with 12 points, shooting four of seven.

In the second half, the Beavers would extend their lead right away, going up by double digits with 15:34 left in regulation. A few minutes later Wagner would hit a layup to cut the deficit back to eight. The Warriors would not be able to take the lead back and would fall 87-72.

In the second game of the week, the Warriors started off with a three-point shot by sophomore guard Devin Whitelow. In response, the University of Mary would hit two of their own and take the lead, with the Warriors responding by hitting a barrage of shots from beyond the arc, on their way to a 11-point lead.

The University of Mary cut the lead back to five with 6:06 left in the half, however, Winona State would go on another run to push their lead back to 20 points.

Thanks to their early success, all the Warriors had to do in the second half was take smart shots and continue to play tough defense, which they did. The Warriors starters played less than 10 minutes in the final period, as they cruised to the 84-56 victory over the Marauders.

A player that was vital to the team success was Wagner, who had a big weekend for the Warriors scoring a combined 34 points.

“The season is coming to an end and the goal is to get a home game for the first conference tournament game, so we need to play well to end the season and tonight was a big step and we need to continue that the next four games,” Wagner said.

The next Warrior basketball game will be at the University of Sioux Falls and tip-off will be 7:30 p.m. on Friday, Feb. 15.